He Had It Coming 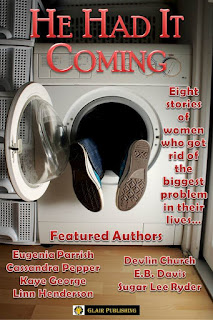 A few months ago, I wrote a short story and submitted it to my critique group. One of the other writers told me the story fit into the subject of an upcoming anthology for which she was submitting a story. I jumped at the chance not only because I’d all ready written the story, but also because the writer was twice Agatha nominee, Kaye George.

After my story’s acceptance, I learned that eight stories were chosen. What I didn’t know was that the anthology, He Had It Coming, was released for Amazon Kindle on August 6th and will be available in paperback by the end of the month.

The title He Had It Coming says it all about the subject—women’s revenge against the men who did them wrong. Here’s a list of the titles by author:

If you are a short story addict like me, please download the anthology on Kindle (imbedded url) or send for the paperback when it becomes available. The Kindle price is $4.99. The first day it was released, I downloaded and read the other stories. I enjoyed them all and thought the anthology was well worth the price. I hope you will too.
Posted by E. B. Davis at 12:00 AM

EB, Congratulations on the publication of your short story.

This seems to be my summer of shorts, Jim. And I'm supposed to be revising my novel. My short in the Chesapeake Crime anthology came out in May. I wrote this one in June and lucked into the anthology. In July, I wrote another short and submitted it to an annual anthology, in which I've had two other shorts published called, A Shaker of Margaritas, but I haven't heard if my short was chosen. This month, I working on another short for the new Chesapeake Crime anthology. Recently, I was struck by an idea for our annual Christmas shorts (hint,hint), which I'll work on next month. That's the problem with shorts--too many ideas that can be worked within a few weeks. I guess they're like potato chips!

Yes--I need to get back to my novel--but it's hard to stop!

Congratulations. I've read earlier versions and it's a great read.

Congratulations, Elaine. I'll keep it in mind when it comes out in paperback later this month.

Thanks, Warren. I was going for voice on that piece. I got caught up a bit in the mechanics of her freeing herself, but I tried to shorten and streamline it. Thanks for your help.

The publisher emailed me yesterday, Gloria--it evidently is out in paperback already. I didn't see it on Amazon, but it has to be there. If not, go to http://www.smashwords.com/profile/view/pepper/authors#published. It's available in paper there.

Congratulations, E.B. I downloaded to my Kindle and thoroughly enjoyed your short story. I agree with Warren that it is a great read!

Thanks Kara! I thought they were fun too.