Every year during our vacation, my husband charters a Hatteras style fishing boat to take him to the Gulf Stream. It’s a passion for him. The Gulf Stream flows twenty miles off the coast of Hatteras Island, which is the closest point anywhere along the East Coast. On a fast boat, it takes about an hour and a half to get to, a short trip compared to other coastal harbors.

My husband and five cronies usually catch about 200 pounds of Mahi (the dolphin fish—not Flipper) and a few other assorted fish like Tuna or Wahoo (yum!), but sometimes Trigger or King Mackerel (yuk!). Not that I don’t like Mahi, but year after year I end up with a freezer full of Mahi, which provides monotonous eating from August to April. 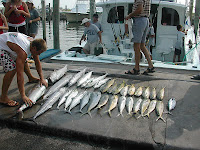 This year, no one could go. My husband decided to fund the trip alone, which meant that aside from my son, his friend, Ethan, and my daughter there were two extra seats to fill. My son’s girlfriend and I were drafted to go. I grew up around boating so I wasn’t fearful, but I anticipated and dreaded a boring ten-hour day trapped in cramped quarters that smelled of fish. To have me go fishing out in the Gulf Stream seemed to be a milestone for my husband. I bit my tongue, resigned.

5:00 a.m.—With six of us, we decided to take two cars. I drove my old SUV, which we had just decided to fixed up to keep a few more years. My tires were one week old. As we drove in the dark out of our neighborhood, I hit a beer bottle lying on the road, the aftermath of the night’s trash truck. The bottle crunched under my tire. I held my breath and continued down Route 12 about five miles to the harbor without mishap.

5:30 a.m.—A squall broke loose when we arrived at the harbor. We stood on the deck smashed against the building’s overhung roof to remain dry. When the storm abated, the captains, who were tracking the storm on radar, assured us that after the squall passed there would be no more.

6:00 a.m.—We left the harbor. The rain had stopped and the sky became light enough to see. I took a few pictures before being interrupted by the mate to go over fishing protocol and procedure. We were told that the captain, who operated the boat high in the tuna tower, located fish by radar and sight, signaled to the mate, who then would ready us into fishing positions with pre-baited rods so the contest between man and beast (fishies) could begin. I listened with one ear as we got into the sound’s channel and made our way to the inlet, that turbulent stretch that delineates the sound from the ocean. 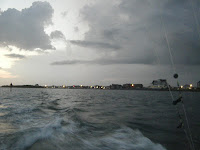 6:30 a.m.—My husband explained to me that our captain had worked at the boatyard building the type of boats we were on and that our charter boat, The Big Eye, had double ribs, meaning the boat’s hull was extra tough. Good to know since we were passing through the inlet to the ocean, which didn’t seem anymore tranquil than the inlet had been. The waves were higher than the aft deck.

7:00 a.m.—Everyone was ordered into the cabin when lightning struck nearby. I was sitting in one of the fishing chairs bolted to the aft deck when the order came. Getting from the chair to the cabin was only possible by crawling since the un-level deck bounced under my feet in no consistent direction. I made it as far as the entrance to the cabin and decided to sit on the floor where the wind blew cool and I could see the horizon. Ethan lurched out of the cabin and blew his cookies into the drink.

7:30 a.m.—We were getting close to the Gulf Stream. Sea grass floated by us. We told Ethan to look at the horizon and stay in the airflow. He immediately discarded our suggestions by going below deck to the head. Throwing up in the head meant an instant $200 fine by the boat management. We funded the expedition, but we weren’t happy that Ethan hadn’t followed our advice. He lay in a berth below deck where he remained for the rest of the trip—in misery. When I went to use the head, I found that he had not made us incur additional expense, and I thankfully did my business without nastiness greeting me.

8:00 a.m.—The aft deck pitched to and fro. My son, whose stomach had us concerned since he seemed unwell over the course of several days went to starboard side and also blew breakfast. (When he proposed to his girlfriend two days later, we understood his nervousness.) Accustomed to charter fishing, he knew what to do and felt fine for the rest of the trip. 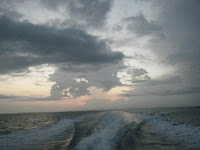 We arrived at the Gulf Stream. The mate proceeded to tell us where to stand to fish. I told my husband the mate’s suggestion was ridiculous—we couldn’t stand let alone fish. My husband went up to the tuna tower to talk with the Captain.

8:30 a.m.—My daughter, son’s girlfriend and I persevered. We weren’t sick, but we wondered about men’s sanity. Perhaps fish really did control their brains. Up in the tuna tower, my husband reported another squall line had formed—out of nowhere. No squalls appeared on radar. On the radio, a captain of another nearby charter boat and our captain concluded that the squalls were forming where we were located—an event that happens about every five years.  They saw two fronts colliding in back of us, where the squalls emanated. The other charter boat was much larger than ours. The captains decided to buddy up and make a run for the harbor. I noticed that the larger boat positioned behind us, making me wonder if those double ribs were more important than size. I was glad I was on the smaller, sturdier boat, but then I also knew my husband, who picked out this boat. I made a damn good choice when I married him.

9:00 a.m.—The waves, now fifteen feet high, dwarfed the boat. I understood what the term “donkey riding” meant. The captain gunned the engines, but when we hit a trough, he slowed because the water lashed both sides of The Big Eye. The mate balanced on the aft deck, like I used to on ice skates except if he fell, he would go overboard. The motion brought on sleepiness, but I feared closing my eyes would bring motion sickness.

9:30 a.m.—We went for a wild ride through the inlet with the larger boat still trailing us. My husband, who spent most of the ride up with the captain, said that some boats didn’t respond fast enough, and they had to ride out the storm on the ocean. I was thankful for our prudent captain.

10:00 a.m.—We arrived back at the harbor and found my front tire flat. Our five hundred dollar deposit was gone, but we didn’t have to pay the additional eight hundred for the day, and we were alive and on solid ground.  Back home, we took a two-hour nap before dealing with the flat tire.

My husband is considering trying again later in the week. I pray for craft warnings.

P.S. He went on a head boat (holds about 40 people) by himself the next week. Once out in the Gulf Stream, one of the engines malfunctioned. They limped home without fishing on one engine.
Posted by E. B. Davis at 12:00 AM

I'd say you have the background for a great story there,

As a beach writer, I think it will provide a sound basis for a boating scene, ocean setting, and how people behave during turmoil, Warren. I guess we can use every experience to fatten our larder.

Elaine, you can use this for a great scene. Perhaps someone's just found a dead body on a boat, but you can't return easily because of the storm and the murderer is still on the boat. Or it could be a setback for the sleuth who's trying to catch the killer, but the storm gets in the way and forces her/his boat back to harbor.

I agree with Warren and Linda, it makes for a great story. Only a writer would use adversity in a creative way. Your tale had me smiling the whole time and thankful I wasn't on that boat.

It's also another reason why fishing has never appealed to me, not even safely on the shore. I like my fish in a restaurant or bought from a store.

I'm with you, Gloria. I'd rather eat it than catch it!

I won't say I won't go out to the Gulf Stream again, but I won't look forward to another adventure. One thing that I would like to see: In the winter when tuna fishing is the best, fishermen freeze going to the Gulf Stream, then meet up with a wall of fog because the Stream's water temperature is about 80 degrees year round since it starts in the tropics. Once in the Stream, it's warm and the water is wonderful.

Yes, a can see a scene or a short story coming out of this, Linda.

The Hook Up Tackle said...

I would have like to fish out there with you guys. Great pics. :)

Thanks, Hookup. It was a wild ride without fishing. But if you haven't gone out to the Gulf Stream, try it sometime and from Hatteras Harbor Marina--the closest ride! Thanks for dropping by WWK!

That is really a nice experience.

I hope you're being sarcastic! Thanks for dropping by.

“To have me go fishing out in the Gulf Stream seemed to be a milestone for my husband.” – I’m sure your hubby just wanted to share his passion with you. I hope that this trip will not be the last for you. Sailing and fishing are a fun activity. If you are not into fishing, the charter ride can be enjoyable. Being in the middle of a vast expanse of water is relaxing and refreshing. :-)

amazing blog. you guys must have enjoyed a lot while doing fishing. its such an entertaining thing to do. Fishing In Dubai

This was quite an adventure for all of you. The weather is the only thing that can ruin a good fishing day, and I'm glad that you were all right when you reached the harbor. Maybe it wasn't really a good time then for fishing. But on the brighter side, you were able to wrote a good story. ==Bernita @ CatchMeIfUCanFishingCharters.com

Fishing is a good way to spend quality time with the family.