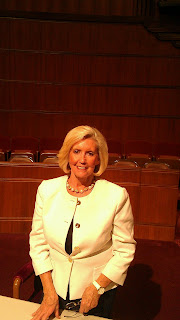 First, thanks to Vivian Jennings, founder and president  of Rainy Day Books, the oldest independent bookstore in Kansas City and to Unity Temple on the Plaza in Kansas City for hosting Lilly Ledbetter who discussed the book she wrote with Lanier Scott Isom titled Grace and Grit: My Fight for Equal Pay and Fairness at Goodyear and Beyond.

I’d seen Ms. Ledbetter on television shows and on the news. I had an idea of some of her accomplishments, but listening to her speak and reading her book helped me understand who she is and how far she has come.

Sometimes an issue needs a real person to move from the abstract to the actual.  Rosa Parks provided the person of the moment to demonstrate discrimination against Blacks in public transportation (and many other areas of life.) Lilly Ledbetter has become the person showing discrimination against women in pay and advancement as well as the prevalence of sexual harassment at Goodyear (and many other employers.)

Ms. Ledbetter was born in the small town of Possum Trot, Alabama in a house without running water or electricity.  As a child she became aware of her family’s poverty and the relative affluence of others. From an early age she determined to find a better life through hard work and excellent performance.  In 1979 she learned that Goodyear was hiring women at the management level.  She expected to have to be better than the men hired with her.  She expected to be tested and she had no illusions about how many men of the time treated women.

She persevered and exceeded demands put upon her through daily harassment, unfair treatment and even vandalism to her car that could have killed her.  After nineteen years, she found a note in her company mailbox that listed her salary to the penny and also listed the salaries of the men who held the identical job.  She was paid less than any of the men.

With the encouragement of her family she took Goodyear to court and began a second multi-year ordeal, this time through the labyrinth of the American court system where she won a three million dollar award and lost an appeal that ended up before the Supreme Court. 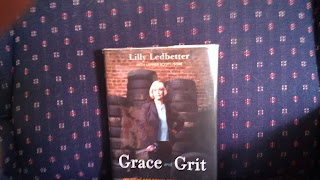 Urged on by Justice Ruth Bader Ginsberg’s dissent, Ms. Ledbetter started still another quest that resulted in becoming “the grandmother” of equal pay inspiring legislation that carries her name. Ms. Ledbetter works to continue the fight for equality and civil rights.
I highly recommend this moving and insightful book. You can order it at your local independent bookstore. It is also available from the publisher
Random House http://www.randomhouse.com/book/210090/grace-and-grit-by-lilly-ledbetter-and-lanier-scott-isom
from Barnes & Nobel http://www.barnesandnoble.com/w/grace-and-grit-lilly-ledbetter/1102790090?ean=9780307887924
and elsewhere.
Posted by Warren Bull at 12:00 AM

Thanks for this, Warren. A remarkable woman indeed!

I've followed her in the news. I was totally upset by the Supreme Court decision. This was just one more decision that shows how far right the Supreme Court has gone in recent years. How could they have voted against her? I can't understand their thinking.

You're welcome. Linda. The woman is amazing.

Gloria, Three justices dissented. One who affirmed claimed she should have filed a complaint sooner, even though she did not know about the discrimination. Apparently the thinking is if you break the law long enough you end up innocent.