Parallel Crafts or the Writer as Knitter 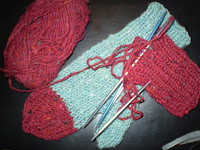 I started knitting about the time I started writing. My grandmother taught me to knit. I had to struggle more with writing, since my family didn't provide a convenient mentor.

In the 1960s I knit sweaters mostly for relatives. By the time I had finished a long project I was sick of it and gave it away. I made only a single sweater for myself, and I still have it. The one thing I wear that I knit is a huge shawl in rainbow colors that I can take to conferences to wear or toss off as the temperature directs. When my daughter was born I gave up knitting big things.

I started knitting lace when my daughter was little, long before it became popular. Lots of her hand-made clothes were trimmed with hand-knit lace. At that time I was writing kids stories like "The Puce Elephant," and "Mommy's Going on a Plane."

When I began working at historic museums, I found knitting is a good handwork to do while waiting for the next tour. No Colonial or New Republic woman would be caught with idle hands.

My first project for Greenbank Mill was a kids' book on the family that lived there in 1816. My second was a bunch of hand knit Monmouth caps. Both books and caps are on sale in the gift shop.

I spend time trying to find appropriate period patterns, but it is hard to come up with anything earlier than the 1840s. Please, if you have anything, let me know.

My protagonist, Emily Lawrence, knits, but can't cook and isn't much interested in being a domestic for her husband. She'd rather be out detecting. Charlotte Wyngate is too busy running her girls school to knit. She would never do so in public for fear of feminizing her image. Hannah Pleasant hasn't picked up knitting yet, but she has had only two short stories to show off her talents. She can tie fish nets, so it is likely that she knits. Maybe in the novel I am working on now, she will have a knitting project. Iccarus Norton doesn't knit, but his mother does. 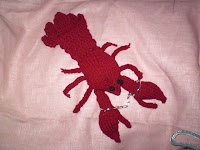 Three years ago I found a realistic pattern for a lobster and knit Hardboiled for Crimebake. I have now knit three Hardboileds and provided each with handcuffs (clawcuffs?) to match the conference logo. 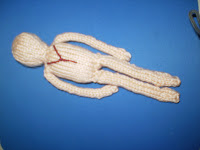 My most recent project was a cadaver complete with Y incision. It comes with a drape in case you find it too icky to display.

Over the years I have discovered my creative cycle is the same for both crafts. I don't do much in the summer but come autumn I take off like gangbusters. I lag some around the holidays and pick it up again in February and work until it turns hot. This makes sense for knitting. Who wants to have a lap full of hot wool in August? Not so much for writing, so I was surprised to find I held to the same cycle.

What a fun post, KB! I love the three Hardboileds with handcuffs!

I, too, am a knitter whose great love is lace, also long before it became popular. But I find that I don't knit very much any longer now that I'm writing novels professionally. Lack of time. I want to reestablish the habit, however, since I feel it feeds the creative engine for writing and helps with problem solving.

I think the creative processes are inter-related. When I write I also hum and make up silly poems.

I refer to my "productive" times as my hyperactive cycle. I don't know what sets them off. Right now I am writing 3 shorts and revising my WIP, but I also have all of the typical spring chores to do. Plus my daughter is graduating from college this month and I have a book opening on the 20th. Sometimes, it's just me, but this month the time of year and special events force me into being productive.

I learned a long time ago that I had great large muscle control, but very little small muscle control--which means my handwriting stinks and I'm not creative in the tactile arts like drawing or knitting. I did cross-stitch for a time before children. I've never had time since.

Good post, KB. I used to crochet. Then I took up painting for years and years before adding crafts of all sorts. For about five years, I did craft parties in the home - sort of like Tupperware parties, only I made everything. I quit after I graduated and started teaching. Now my writing takes up too much time. Where crocheting or painting relaxed me, it's gardening now.