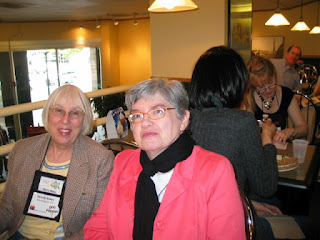 I'm with Barbara Emrys at the Guppy Luncheon

She stood next to the tall table beside a pillar, a table for people to put their empty glasses after finishing their drinks. She was a tiny Asian girl with black hair. Even with a slight smile on her face, I could tell she was uncomfortable and feeling out of place in this crowd of laughing, talking people with drinks in hand standing around in small groups. It was the cocktail hour before the Agatha Awards Banquet at Malice Domestic. I knew the feeling so I went over and started a conversation. Her face lit up with a smile of relief. She'd heard about Malice from somewhere and since she'd read ten mysteries this year, she registered and came to her first conference. She lives in New York City and was quite pleased with herself because she'd come by Amtrak train,  the first time she'd ridden Amtrak. She said she didn't realize people dressed up for the banquet and was uncomfortable because she was wearing jeans and sneakers. I assured her it didn't matter. Later I saw a few similarly dressed and hoped she saw them, too. Then the doors to the banquet room opened and we separated to find our tables.

Meeting her brought back memories of my first Malice Domestic six years ago. In fact, it was my first mystery conference. Like her, I'd come knowing no one. With my best friend and two cousins, I drove from my home in Ohio to Washington D.C. in my little nine year old red Mercury Tracer wagon. Except for dinner outside the hotel that first night with my friend and cousins, I never left the hotel except for a few walks while they toured the D.C. area. I knew no one at the conference and had never heard of Sisters in Crime or the Guppies before I came. I joined both before leaving. That first conference is a bit of a blur in my memory now. I remember attending Lucy Zahray, the Poison Lady's panel and being fascinated. I've gone back to it every year except this year. I chatted with a lot of people, but only stayed in touch with two of them from that first conference; Pat Gulley, a mystery writer from Oregon, and Josephine Wagner, a mystery fan from Florida. I probably talked to a lot of others who I've become better acquainted with, too, but I don't remember who they were now. 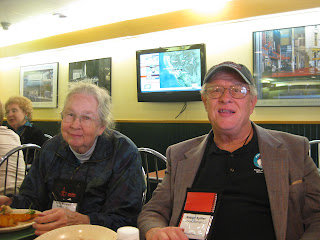 This year was special because I got to meet two of my fellow bloggers for the first time; Linda Rodriquez and E.B. Davis (Elaine), and I also felt more a part of the Guppies. The Guppies Press Quest group went out for dinner at a French restaurant Friday night, and we had a lovely time eating and talking. Every meal was spent with fellow mystery writers, some I already knew as well as many new ones I hadn't met before. It was interesting learning about them. I enjoyed the panels I could get to. Unfortunately, except for Friday, there were four panels at the same time so choices had to be made thus I missed some I would have enjoyed, also. I made sure I went to both of Linda's panels. She did an excellent job as moderator for "Have Gun Will Travel; Mysteries Set Out West," and as an author on the panel, "Well-schooled in Murder: Academic Mysteries" moderated by Judy Hogan.

The funniest event was "Another Shirt Ruined: An Interview with our First Amelia Award Honoree: Elizabeth Peters." It was a roast of sorts by Dorothy Cannell, Parnell Hall, Joan Hess, Daniel Stashower, and a mysterious ghost whose name I didn't get. They appeared as characters from her books. Parnell Hall, who is always funny, stalked in as a mummy after it started complaining the whole time. He ripped off his mummy coverings and was dressed in Egyptian garb under the wrappings. They all complained about the situations she'd put them in, and Daniel Stashower read lines from her books - repeating the same discription she'd used - and ridiculing her for it. The large room was packed and everyone, including Elizabeth Peters, was laughing the whole time. The line for her book signing afterwards was so long, that for the first time at Malice, numbers were assigned. I think she got to everyone even though it went over, but this way there wasn't anybody cutting ahead. I know there was a limit of only one book per person to be signed.

Itg was a good conference, one I highly recommend. I had an excellent roommate, Beth Groundwater. It was our first time sharing a room together, and it worked out quite well. In fact, the only downside to the conference - except some problems with the banquet this year - was that I bought too many books. I won't exactly have to go on a regimen of bread and water this month, but as happens every year, I over spend when it comes to books. Part of the problem is Malice-Go-Round on Friday which is like speed dating with authors moving from table to table with three minutes to pass out bookmarks and tell us about their book. Most do such a great job at this, that if I had unlimited funds and someone to haul the books around for me, I would've bought even more, but I don't. So that's why I'm glad Malice is only once a year.

If you haven't been to Malice Domestic before, I highly recommend it. It's not just for mystery writers, but also for mystery fans, too. One of the delights is meeting friends and strangers with common interests, and in meeting well-known authors, who are just as friendly as all the fans and lesser known authors. In fact, one can see more smiles on faces at Malice than just about any other place I can think of.

Have you been to Malice Domestic or another mystery conference? What was your experience?

How about another kind of conference? What did you like about it?
Posted by Gloria Alden at 12:00 AM

I was good to meet you too, Gloria. Meeting other writers, attending panels that discuss specific subjects and learning about new books/authors are the best aspects of the Malice Domestic conference to me. I also enjoyed the Guppy lunches and met a few Guppies who I hadn't met before. Thanks for the pictures.

Gloria, this was my second year at Malice. I remember my first, knowing no one until Monica Ferris took me under her wing and introduced me to a number of people. It's very different to go, knowing people.

I must say, though, that Malice is one of the warmest, most welcoming conferences around. And it was such fun to meet you and E.B. there int he actual flesh!

There would have been more pictures, but unfortunately when some kind person at the French restaurant where I was eating lunch with some friends, offered to take our picture with my camera. He must have accidentally switched it to video. So every picture I took from Sat. noon until on my way home was a video.
Of course, there were that many of those, either, because I kept forgetting to get my camera out. But I do wish I'd managed to get one of you on the Sunday panel.

Gloria, I forgot to bring my camera along, at all. It was so sweet of you to show up for both of my panels, though!

So many blogs, so many pictures, so much information and Malice sounds like the place to have been, particularly for those who weren't there! I'm purple with envy (there isn't enough green where I live to waste it on envy!)Thanks for sharing.

I can't tell you how many important events that I've forgotten to take my camera. Even worse is when I do take it and forget to use it. It's much worse since my daughter gave me a digital camera. It's so light weight that I forget I even have it in my purse. I wouldn't have missed your panel, and I'm so glad I bought your book, Linda. It's very good and quite worth the hard cover price. :-)

Sorry about the videos, but maybe you can put some on Youtube? It was great seeing you again, Gloria. And how kind of you to take the lone gal under your wing. I try to connect with a lone person at least once during Malice. But the best part is that you can join just about any group and immediately be included. Thanks for the post!

Thanks for the information. I know Beth from other events. She's great.

Sounds like you had a great time and met some great friends. I know about buying too many books. I did that last time I went to the conference...the one you talked me into going to, remember? But it was a great time. I'll have to make it to Malice next year.
Mary

Yes, Mary, I remember. I'd love to have you go next time, too. Maybe after you get some of those houses sold you'll be able to go. :-)

Kaye, you probably spoke to me at my first Malice, that is if you were there six years ago. I know you to always be aproachable and friendly.

Warren, you're right about Beth. She's so pleasant and easy to be around.

Hi Gloria,
I loved sharing a room with you! We are indeed very compatible. Unfortunately, we were both so busy with conference events that we didn't have much downtime in the room to chat.

I am looking for a Bouchercon roommate, but I don't think my hubby would like me sharing with Warren, no matter how much he compliments me. <>

Thanks for the update, Gloria. I hope to make it one of these years. I'm a huge Elizabeth Peters fan and it sounds like the roast and the signing were both a real treat.

I'll be going, Beth, but I'm not sure how many nights I'll be staying since it's only about 50 miles from my place. The hotel is already solidly booked, but there are other hotels quite close by. I'll let you know.

She was awesome, Nancy, but I think everything including the long lines tired her out. It was a real treat. I know everyone enjoyed it immensely.

I remember that meeting, I remember glancing your way and feeling like we should talk. Happy memories and sad that I didn't go this year. Bummer.
Patg