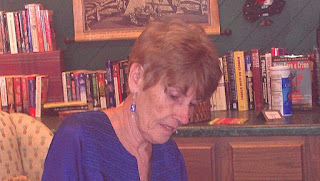 In the interest of full disclosure, I should tell you that Sally is a friend and, as much as I have enjoyed her earlier books I have not read this one yet. That’s because I gave it to my wife as a birthday present.
Every time I move in to snatch it from her hands, she emits what I can only describe as a low growl.    The hair stands up on the back of my neck and I back away carefully.  I’m sure when she finishes the book I will be able to read and enjoy it.

The Fatal Fleece is the sixth book in National Bestselling author Sally Goldenbaum’s Seaside Knitters mystery series and her 34th published book. The week of its release the book was on a number of bestselling mystery lists.

I attended Sally’s signing at I Love a Mystery Bookstore and at least I can tell you about that.  Sally said that, acting on the advice of readers, she decided to in this novel to delve more into the lives of some of her main characters.  She said she had to learn now to wind in and out of Birdie’s life and explore Cass’s problem while still pursuing the mystery.

Sally said she likes writing a series but it is hard to kill off characters she likes. Some readers have suggested she bring dead characters back to life but that would change the mysteries into ghost stories.  She mentioned that she wants each book to work as a stand-alone so she has to introduce the town and the characters each time without boring readers who already know them.  Sally also has to deal with the “Cabot Cove” syndrome, i.e., writing about a small town where people keep getting murdered.

Sally reported that her books have been translated into German, Norwegian and Turkish.  Sally said she writes under a tight schedule, which gives more time for editing than for writing.  She said the cover art and titles are decided by the publisher, but she does have a working title for her next book — “Book Seven.”
Posted by Warren Bull at 12:00 AM

It gives me pause when Sally says that she devotes more time to editing than to writing. How remarkable! Making a complicated plot takes a lot of time. In revising, I'm trying to tie my knots tighter and untangling others that I'm not sure do the job. But, I know my plot and objectives of revising. The original plotting took me much longer.

Sally's books sound like fun reads--I'll have to sample one. Thanks for bringing her to my attention, Warren.

I think I'd like Sally's books. I'll have the check them out and add them to my growing TBR piles. Like Sally, I get attached to some of my characters and hate to have anything happen to them. Usually, I don't get attached to the victims, but I often do to the murderer.

Sally was very interested in hearing from readers at the reading. As I wrote she used readers' ideas in this book and used the occasion to ask what people did and did not want to have happen in the future.

For a review of check out http://marlyn-stuff.blogspot.com/2012/05/just-finished-reading_25.html?spref=fb

Yes, you must read Sally's books, EB and Gloria. They're excellent! You'll love them. And Sally is one of the nicest people in the world.

Full disclosure: Sally is a good friend of mine, as well, and I've not read this book yet because I've been on book tour, but I hope to get it and read it soon. I've read all her earlier books from both series and loved them.

I'm sorry I'm late checking in. Lost power in the storms that hit us yesterday and just left in today's early afternoon.