The image of Cinco de Mayo in American minds is of a Latino St. Patrick’s Day, a day to get drunk on cervezas instead of beers with photos of beautiful girls in brightly colored whirling skirts rather than leprechauns. Many think it is Mexican Independence Day (which is actually September 16).

If people travel from the U.S. to Latin America, they won’t find it celebrated anywhere, except regionally in Mexico around the city of Puebla. Cinco de Mayo actually commemorates the Battle of Puebla in 1862, in which Mexico defeated French forces which were trying to invade Mexico. Some immigrants from that region of Mexico to California first celebrated Cinco de Mayo in their U.S. exile. The beer and liquor industry in the U.S. picked up on it in the 1980s, featuring it in TV commercials and advertising everywhere. The Liquor companies wanted to gain a larger foothold in the growing Latino market, and they can always use another holiday to encourage people to get drunk. At the same time, many U.S. Latino communities saw Cinco de Mayo as a time to put on fiestas and celebrate the music, dancing, and other cultural attributes of their communities. So Cinco de Mayo has become more of an American holiday than a Mexican one.

On the one hand, the holiday has been exploited cynically to sell liquor and beer, using every Mexican or Latino stereotype possible. On the other hand, it has been used to bring communities together around a common culture and demonstrate the beauties of that culture to mainstream U.S. society. The sad thing is that some Latino children know no more about the actual roots of the holiday than the average American citizen. It is actually an occasion of genuine pride for those with Mexican heritage. 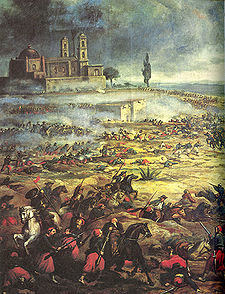 In the Battle of Puebla, the French armies were better equipped and armed, numbering 2,000 soldiers more than the Mexican army, which was led by General Ignacio Zaragoza. French Major General Charles de Lorencez, leading what was considered the best army in the world at that time, had pushed the ragtag Mexican army back from Veracruz and from Orizaba. The Mexican army fell back to the fortress city of Puebla. Lorencez expected an easy victory. Instead, he retreated with his defeated army in the rain back to Orizaba, having suffered more than three times as many casualties as the Mexican army.

It was a genuine David vs. Goliath moment, and the regional holiday it spawned was a joyous celebration of Mexican culture. So if you’re celebrating Cinco de Mayo this year, remember it’s about more than cervezas and tequila or sombreros and cactus. It’s a celebration of about keeping a country free of European overlords (if only for a little while—the French took over Mexico a year later until Mexican Independence in 1867). Cinco de Mayo is an American celebration of all the fabulous foods, art, music, dance, poetry, and other cultural gifts Mexican immigrants have given America.

Posted by Linda Rodriguez at 12:00 AM

Cinco de Mayo was like the Battle of Bunker Hill during the U S American Revolution. It let the larger, better-trained and more-respected army know that there would be no easy victory. I've always thought the date is celebrated in part because it is easier to pronounce in English then more important dates in Mexican History.

There was a short story in our 3rd grade reading book when I was teaching that dealt with the celebration. I don't think it covered the historical meaning, that I recall, but more about the social customs associated with it here in the U.S. The same with the social studies books. It's a shame, but the social studies books in general were a shame - a short gun effect of a few paragraphs or a page or two on all aspects historical or social. I learned more from this blog than I ever did in school - both as a student and as a teacher.

Warren, you're absolutley right about the comparison to bunker Hill.

Gloria, Cinco de Mayo per se is an entirely American holiday. In Mexico where it is celebrated (around Puebla), it is known as the Battle for the city of Puebla, not Cinco de Mayo. It's become a celebration of Mexican heritage (and now Latino heritage) for Mexican-Americans (now all American Latinos). I just hate to see it turned into just another excuse to get drunk by the liquor companies.