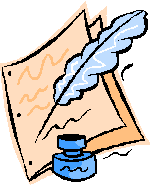 In a perfect world I follow a predictable pattern when planning a new story. First, I brainstorm while seated on a comfortable chair located next to an open window and jot down ideas using my favorite black pen on paper. Then, when I’m ready to outline or write a rough draft, I move to the office and use my computer. While reviewing, I prefer to sit on the living room couch and use a large red pen to make corrections or changes on the printed pages.

I thought moving to different locations while writing was unusual until I read about Walt Disney. He believed in a three part creative process: the Dreamer (brainstorming and formulating ideas), the Realist (transforming ideas into concrete plans), and the Critic (spotting problems and offering constructive and positive solutions). In fact, Disney used separate rooms to work on each of the three creative parts. He literally kept the dreamer, realist and critic in separate places and from interfering with each other.

Of course, it’s not easy for most of us to go to three separate locations when writing. Trying to squeeze in any writing between family and work obligations is difficult enough without maintaining three distinct writing areas. Sometimes all we can do is scribble down ideas on envelopes or scraps of paper while in a doctor’s waiting room or riding the metro.

So, how can we separate out the three parts without using three separate rooms? Anything that signals a transition is helpful. For instance, stand up and stretch, walk around, ring a bell or change your clothing--anything to let both the conscious and subconscious mind know that you intend to move to another phase. 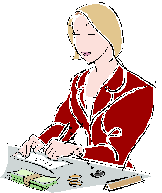 It seems that Disney had an ability to balance all three areas (dreamer, realist and critic) so that one didn’t dominate the other. If he felt his creative team was stuck in detail while planning a project then he became a dreamer to help them move forward. Or, if they were lost in fantasy, Disney became a realist to ground his team.

Since we usually write alone it's necessary to get ourselves “unstuck” from each phase. If your critic is on the rampage, take a break and do something creative like baking or photography. Or, when your dreamer is running amok, balance your checkbook. That can be a huge dose of reality!

What is your creative process for planning and writing a story?
Posted by Kara Cerise at 12:05 AM

Multiple-award-winning New Zealand Author Lyn McConchie has a unique method. She can program her subconscious ( a male named Subbie ) to write an article or short story about a particular topic with a specific word count while she sleeps. When she wakes up she writes the story or article down.

How cool, Warren! I'll have to study up on her, to see if I can learn about her process.

This is an interesting blog, Kara. I had no idea that Walt worked that way. It's nice that you're able to separate the processes out as well.

I haven't thought about my creative process in quite the same way as you listed here. Mine is more of taking a bunch of index cards & writing one or two sentences describing scenes on each of them. Then I take those & expand them into words.

I'll have to stew on this idea for a while, because I can see the merits of having separate spaces for each step.

What a unique and useful method, Warren! I'm inspired to give Lyn McConchie's method a try tonight.

I believe it's called the 3-door principal, Alyx. I read about one entertainment company that uses Disney’s method. For brainstorming they find off-site locations that fit the theme of their TV shows. When they worked on a series about spiritual warfare, they brainstormed in a graveyard.

But maybe notecards are the best creative process for you. Perhaps you are able to blend all the stages together without needing abrupt transitions.

Alyx, you are actually using the storyboard method, which is what I use. It starts out with thinking. Then, I get specific, asking the question how I can demonstrate the story most effectively through scenes. For each scene, write a storyboard listing the objective of the scene at the beginning. Each scene must have a beginning, middle and and end--which demonstrates the objective.

I'm on revision and that the part I'm having trouble with. I'm on page 60 now and so far so good. But, I think that further through the book I haven't followed up as well as I could have on clues that I've dropped into the beginning. Maybe I have and have just forgotten, but I'm going to make sure.

One thing though--few of us can afford a different setting for each of these processes. I'm convinced that they are states of mind, which doesn't really require different venues.

I can't write well anywhere but in two separate places in my home. I usually begin my blog, a poem or a chapter with a pen and paper in my nesting chair. If it's a chapter for my book, I move to my library table where I can spread out the notes and the first few paragraphs I've written and stick to it until the chapter is done. Finally, I type it in on my computer where I do all my editing, too.

Another thing I keep is a running synopsis for my chapters that includes location, characters appearing, day of the week and time of the day and what went on in that chapter. It helps remind me what characters need to reappear, for instance.

I wish I could program my subconscious like that, Warren. Although, maybe I do. Often I have no idea beyond a few thoughts where the next chapter is going and when I start to write words flow out that I'd never planned.

I think you're right, E.B., that each process is a different state of mind. My guess is that Disney wanted a quick way for his team to be in the same state so he anchored each of the three phases to a different room. That way everyone knew, for instance, that there wasn't place for the critic in the creative room.

The storyboard method sounds interesting. I used storyboarding when I worked in advertising but haven't tried it for writing.

Gloria, that’s so interesting that you weren’t able to write in your creative writing class but the ideas flow when you write at home. It sounds like the right atmosphere helps you create!

The creative part usually happen with me standing up in a room with a chalk in my hand. I brainstorm by writing on the wall. I like it because it's a really large canvas so I can more easily link ideas at opposite side of the wall (versus something that would be on page 1 with something on page 6). Also, I can easily just step back and I can see the whole picture.

Alternatively, I can also brainstorm with traditional pen and paper. For that, I need a comfy chair, like the corner of a couch or anything really, as long as I can curl up in it with my leg almost under me.

For the writing part, the best way for me in some sort of coffee shop kind of place. Somewhere I can buy something to drink and/or eat, where there's people coming in and out, and always with my music.

I don't know why, but I can't brainstorm when there's people around or I get distract, but when it comes time to write, I get distract when I'm alone and I need people.

Both the creative and the writing(realist) I need my music and most of the time it has to be loud and there's got to be lyric to it.

The revision(critic phase) is particular for me. I need a place that look and feel like a workplace. A office-like surface, no music or distractions whatsoever, always alone. I'm not really a fan of the last phase to be honest.

I didn't know that Disney had a method like that. I'm happy to know I'm not alone!

Thank you for sharing your creative process, MC! What a brilliant idea to use a wall for brainstorming. I can see how valuable it would be to write out ideas and then link them. It sounds like you are naturally following the three part process. I think Disney would have been impressed.