How To Get To Tina's House 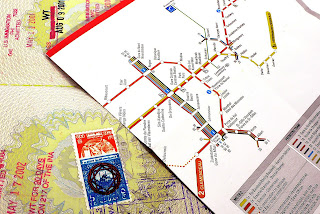 How to get to Tina’s House
I took a recent trip to Corvallis to listen to my nephew sing the role of Papageno in the Opera, The Magic Flute.  He was fantastic and the opera was really entertaining, by the way.
My sister sent directions that I thought I would share in an abbreviated slightly edited version. I also include commentary from me.  This is with Tina’s permission.

From Tina:
From the airport, you will be on Airport Way. Go about 1.5 miles until you see the exit for I-205 south.  Take it for almost exactly 24 miles (stay on it until it completely ends.)
Warren’s comment: So it means you don’t get off when it partially ends.
Continue on to the correct exit. You don’t want to miss this exit because the next one is too far away. Life won’t end, …
Warren’s comment: What a relief.
…but it will be frustrating to go that far before you can turn around and come back.
Take a turn right. You should be heading west, toward Corvallis, Newport, Oregon State and Oregon Beaches! (One never knows what all is identified!)
Warren’s comment: Deeply philosophical.
You technically stay on this road until you you’re two blocks from our house. I digress.
If you find yourself missing that turn, you’ll hit the bridge. Call me if that happens…it’s an easy change. After about five miles you will see a small sign at the city limits. You take the first left hand turn that exists.
Warren’s comment: It’s shortly after the imaginary left hand turn.

Take an immediate left. Go straight through the stop sign.  We’re the second house on the right.
Posted by Warren Bull at 12:00 AM

At first glance, instructions can sound innane, yet when we are following them, somehow they make sense, and we arrive at the destination. Where I live, we have so much new construction ongoing that it is never safe to count traffic lights telling someone to "take a left" at the seventh light because they may have slipped in another traffic light somewhere that will throw your instructions off completely.

I do hope you got to Tina's house, Warren.

I did arrive and we had a wonderful time.

LOL, Warren, I have a smartalecky brother too. I used to want to smack him all the time. :)

LOL, Warren! Remind me never to give you directions!

I was a little confused, too, but I guess you made it okay. At least she didn't tell you to look for a rooster perched on a fence post. I'm glad you enjoyed yourself.

So, welcome to Oregon Warren. It sure sounded like Oregonian directions, and she's right about not knowing what the signs will say. One thing for sure, WEST is to the Beaches!
That 'go straight through the stop sign' was the best one.
Patg

Gloria, I used to get directions from long term resident of a small town that included things like, "Go past where the Anders' barn that burned down ten years ago used to be."

I reminded Tina of that gem every time we got to her corner.