Chesapeake Crimes: This Job Is Murder

I joined Sisters in Crime’s Chesapeake Chapter a few years ago when I started writing. SinC provides its writers with many opportunities, including creating venues for its members’ writing. Tomorrow, May 1, the Chesapeake Chapter will release its fifth short story anthology of Chesapeake Crimes. The stories were all chosen by blind submission--so the editorial panel (Ellen Crosby, Dan Stashower, and Sandy Parshall) had no idea whether each submission was by a newcomer or a seasoned author.

To my delight, one of my short stories was chosen for inclusion in this new volume, Chesapeake Crimes: This Job is Murder.  Award winning/nominated authors Donna Andrews, Marcia Talley and Barb Goffman edited the anthology. Some of the authors wrote about their “the story behind the story,” which I hope you enjoy. E. B. Davis

My short story thriller, “Deadrise,” was inspired in part by news reports about the rise in drug trafficking along the Chesapeake Bay. A research excursion along the bay led me to choose as the setting tiny St. George Island in St. Mary’s county, with its rich nautical history and natural beauty. I threw in ruthless drug smugglers, a resourceful investigative reporter, an attractive female police officer and a restored deadrise work boat, mixed them all together with some mayhem and danger and a touch of humor, and cooked up a tale I hope will provide the reader some pleasant diversion. – David Autry

I try to be an understanding wife, but when my husband lusts and drools over fishing boats, he strains my patience. Unfortunately, a certain store catering to men’s fishing and gaming hobbies locates its retail outlets so that they are visible along I-95 and VA Route 64, highways we use frequently. It’s a wonder there aren’t more accidents along these highways because the stores use their parking lots to showcase fishing boats and ATVs. My story, “Lucky in Death,” pays homage to an unlucky wife of a man who couldn’t resist the goodies in this store.—E. B. Davis


“Give me your tired, your poor, your huddled masses, yearning to be free.” And so they came, many in the early 20th century, from Russia, Poland, Ireland, Italy, and many other countries around the globe. Large numbers settled on the Lower East Side of Manhattan, enduring the worst kinds of circumstances, as they struggled to create a better life for themselves and their children. My story, “The Factory,” is dedicated to my grandparents and those other brave souls who made that long and difficult journey. –Harriette Sackler

While taking a shower one morning, for some reason that is completely beyond my conscious understanding, I was inspired to write a tale of revenge. With hair still dripping wet, I sat down at my computer and started typing: “Athena Papas didn’t fall off the platform onto the tracks the way they reported it on the news. She was pushed.” Two hours later, hair almost dry, the first draft of “Next Stop, Foggy Bottom” was done. I think it’s very possible (I say with a wily smile) that I channeled the spirit of Athena’s disgruntled employee.—Karen Cantwell


As a military spouse, I've lived by the motto "Bloom Where You're Planted." Following this philosophy usually leads to enjoyable new experiences. Other times, when life decides to plant a water lily next to a desert highway or squeeze a sequoia into a tiny chipped pot on a third floor fire escape, it’s a bit more challenging.
A few years back, I found myself transplanted to a quiet backwater; so quiet that the biggest excitement was when the kids found snakes sunning on the driveway.
My escape was to write a mystery set in a town with a sumptuously beautiful beach.
But who would my private investigator be?
And Serena showed up. Someone as different from me as possible. She's a statuesque former lingerie model, and I, um, wear underwear. She drives a classic BMW. Me? A minivan with Legos under the seats. She's on the run from her murderous mob connected family, and, well, you get the idea. What did we have in common? We were two transplants trying to make the best of our new lives.
"Keep It Simple" was a delicious escape to write, and I hope it will be a delicious escape for you to read – wherever you are. –Shari Randall

I've long heard this piece of mystery-writing advice: Come up with a unique sleuth. I'd thought about that and realized there was one ... person ... that no one had ever used as a sleuth (to my knowledge). God. A ha, I thought. I'll use God as my sleuth. And then I realized, Oh, wait. God doesn't work as a sleuth at all. No matter what case you present, God will already know who the culprit is. So I put God on the back-burner until we'd announced the call for stories for Chesapeake Crimes: This Job Is Murder. I was talking with a friend, debating story ideas, when suddenly I realized that Job has a second meaning -- it's a well-known Biblical name. And the pieces fell into place. God could have a helper. A sleuth he sent out into the field. A sleuth who is well known for his suffering, who could look into a murder on God's behalf and encourage the guilty party to admit his sin and repent. And my story "The Lord Is My Shamus" was born. –Barb Goffman The inspiration for my story, “Alligator is for Shoes,” was my gag reflex. I love to cook and often thumb through old cookbooks for ideas. I’d picked up a favorite, the 1970 edition of CHARLESTON RECEIPTS (inherited from my father), containing quirky recipes handed down through the generations. Giggling over titles like “Bluff Plantation Cooter Pie,” I started reading the chapter, MEATS, even though I’ve been a vegetarian for decades. By the time I noticed the subtitle, “A’ Poil et a’ Plume (Hairy and Feathered),” I was transfixed. However, the titles in this section weren’t so quaint: Squirrel Head Potpie, Corned Tongue, and Ragout of Bear. Ew. Suddenly, I realized I had the perfect ingredients for my story—a chef specializing in game and exotic animal dishes whose assistant goes missing on the eve of Gastronomic Gambles, the most important televised cooking competition of his career. Assign a newbie PI to the case, a princess who’s never cooked a meal in her pampered life, and there will be murder on the menu tonight! –C. Ellett Logan 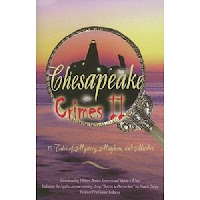 "Murder by Mediation” emerged from a road trip I took, listening all the way to the Brother Cadfael mysteries. When I got home, certain incidents from my legal career began to rearrange themselves in my mind, urging me to write them down. A courtroom incident I witnessed, for example, involving a judge telling a female lawyer that he was so distracted by her legs that he couldn’t hear what she was saying, shouted for inclusion in the tale. But to my surprise, as the story unfolded, the peaceful pursuit of mediation to resolve divorce problems transformed into a self-help, do what you gotta do, model for dispute resolution. Main character Rainey typifies the divorce lawyer who knows there has to be a better way than fighting in court and yet, as a mediator, finds herself thrashing around in the muck of messy emotions.—Jill Breslau

"When Duty Calls" was inspired by two friends who found themselves in a working situation similar to the couple in the story, caring for an aging and very distinguished man living on his own. Any other similarities, of course, end there — both in terms of the characters and of the plot and even of the setting — but the potential emotional difficulties inherent in such a situation intrigued me: the desire to balance your own life and space against another's, and the desire to maintain professionalism (it's a job after all) against the inevitability of becoming almost like family, both good and bad. I'm not sure where the military aspect of the story came from, but the more I wrote about that older gentlemen at the story's center, the more he seemed like a veteran officer, hewing to his training and sense of duty even in his seeming dotage. And it was that perspective on him that finally opened up the story for me and let me see all of it more clearly. —Art Taylor


Chesapeake Crimes: This Job Is Murder can be bought at: Wildside Press, Mystery Loves Company,  Barnes & Noble and  Amazon. The four previous anthologies are also available at this Wildside Press location. We hope you enjoy our short stories. E. B. Davis
Posted by E. B. Davis at 12:00 AM

It's always interesting to hear about what sparked an idea for a story for other writers. Congratulations to all of you and thanks for sharing with us.

I don't know about you, Warren, but I find it hard to write to topic. I'll have ideas for shorts and then when an organization or publication calls for a particular piece, my ideas seem to fly out the window.

I had written my story about six months before without a clue as to where I was going to place it. Serendipity? In a way I'd like to think so, but then in another way, I hope not!

I'm proud of the fact that my short was chosen from a blind submission.

Congratulations, E.B. on being chosen and all the others in it, too. It's always a thrill when one's work is accepted. It brings back memories of when I got the news my short story was picked for "Fish Tales."

Reading about how these writers came up with their ideas was interesting. Some of them told their story this past weekend on the short story panel at Malice.

It was nice to finally meet you at Malice. It's too bad it was towards the end of our last day.

Good to have met you as well, Gloria. I spent a lot of time staring at our name badges that hung about chest level on everyone because I wanted to meet people who I knew I wouldn't recognize by face. I was also happy to meet Linda too! I hope no one thought I was a weirdo!

I submitted a story to Chesapeake Crime 3 and was blown away when I saw it listed in the table of contents. Before that all my stories had been published by the groups of which I am a member so I was known to the staff. I picked up a copy of CC2 and read it from cover to cover. It is a good series to be part of. Good for you EB.

I didn't know they accepted stories from outside of the membership. But all the stories are picked by blind submission so when they picked your story, they wouldn't have known who they were picking. You weren't informed that your story would be included? That's incredible. Donna Andrews announced at Malice that they are already planning Volume 6. I'm already plotting. I may have to ask for your help since what I have in mind is historical--at least the 1970s!