The trip-ups for historical writers are not the big events which are reported in history books or can be found with a bit of digging. Trying to figure out who was the sheriff of New Castle County in 1752 is fairly easy but figuring out what life was like without clocks or matches is another matter altogether. 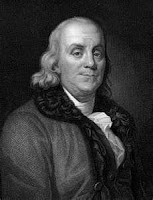 I spent eight hours last week reading the Pennsylvania Gazette, Benjamin Franklin's newspaper. It was for my paid job, but there is so much overlap between my work and my writing that the hundred or so pages of articles I pulled will suit very well for work on my novel.

I try to use as many primary sources as I can. Primary sources don't always give you correct information but they do give you a feel for the people and the way they thought and acted. Journal entries, letters, wills and other documents are not always easy to find. My job as historical interpreter gives me opportunities to operate a water powered grist mill, cook in a wood fired oven, fire a musket, and wear the clothes of the period. Everyone who writes historicals needs this kind of first hand experience.

Some things I knew already but the paper gave me a feel for: I knew that women took part in business affairs in this period, but the number of women named as business owners, estate executrixes, and educators brought it home to me.

October 1, 1741 These are to give notice that Mary Cowley (Widow and Administratrix of Matthew Cowley, Skinner, deceas'd) does still continue with the Assistance of her own Family to carry out the business of Buckskin Dressing, she being of Ability to secure to the Owners that they shall think fit to intrust her withal.

Descriptions of land sales showed that a homestead was a center of commerce.

To be sold, a grist Mill having two pair of stones, also a dwelling house, a store and Cooper's shop.

I also learned some new things:

Items bought and sold are advertised here, sometimes with prices. Can you identify all these cloth types sold by Thomas Hatton?

Runaway indentured servants and slaves are listed in detail. Runaways in order of their frequency are Irish, English, African, Dutch. I had expected most would be second generation African slaves.

Run away a servant Man named David Steadman, an Irishman.

Most fun were the pirates and privateers. Ships were brought to Philadelphia so the prizes could be sold. One prominent pirate Capt. Sibbald (I never heard of him before) was from Wilmington, in what is now Delaware, but what at that time were the Three Lower Counties of Pennsylvania. 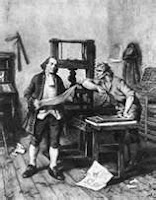 Many lost strayed or stolen horses were black and all were pacers. Pacing is faster than trotting so a pacer is desirable. They averaged around 14 or 15 hands (56 to 60 inches).

Then there were the funny items, well funny to me, but probably not to the original readers.

August 12, 1736: A shark judged to be near 10 Foot long, was seen swimming up and down in the River near this City. April 3, 1746 Notice is hereby given to the Constables of the Province of Pennsylvania, That by a late Act of Assmembly for the more effectual Suppressing profane Curing (sic. Cussisng?) and Swearing, they are enjoined to affix a Copy of said Act in the most publick Place in their Districts. June 5, 1735: Lent and forgot to whom a large Geographical Dictionary of England, Scotland, and Ireland, and Plantations of America. July 18, 1751 On Friday last two Men went into the River to wash themselves; that one of them (not being a swimmer) got out of his Depth, and the other going to his Assistance, they both drowned.

Best of all for my purposes, I have a complete list of local officials election results from the 1730s through the 1750s. So I know that the sheriffs of New Castle County who were the bosses of my hero Cobbs Crossing constable, were George Monro and William Golden.

And a few that might find their way into a mystery:

June 19, 1735: Sunday last one Rachel Twells of this City died suddenly and the Coroner's Inquest having sat on the Body brought the body brought in their Verdict, that be drinking too plentifully of Rum and other strong Liquors.

KB, what fun! It almost feels as if you took us researching with you.

The big problem for historical novelists is how much of that research to use--and usually the answer is not much. It was important to inform the writer and give her the feel of the period so she could write with confidence, and a bit here and there can be important to the story AND give verisimilitude to it. However, the bane of the historical novelist is the research infodump. I'm sure everyone's read one of those novels where the author did lots of research and felt compelled to use every last bit of it in his book.

Primary sources are so much better than secondary or tertiary. No matter how even-handed a historian tries to be, his or her POV always creeps in. With Abraham Lincoln I have my own ideas about some of the historical controversies over his speeches. LInda is right about research dumping. On the other hand in some historical novel when things go from interesting to compelling I think to myself the author has abandoned fiction and is writing about actual events.

I hate when I type a long reply to a blog and Google sends me off to type in my password and my comment is gone. Is a shorter version.

Love your blog and reading about the past. I've always enjoyed reading letters and journals from the early years of our country. One of my book clubs recently read,
Founding Mothers: The Women Who Raised Our Nation by Cokie Roberts.
It was full of excerpts from letters, etc. which made one realize how important the women actually were in building this country. Gloria (in case it doesn't come up again.

I've been doing historical research too, KB. Only my research concerns the 1970s, which I lived through. Somethings I remember amazingly well, others I'm learning were different than what I remember--the location of a bar, what happened in the world while I existed in my own little world and specific dates. I love research, but determining how much to do and where to stop can be daunting. I do more than I need, but I can't help but think that soaking up more than you need gives you more flavor of the times and that adds to the writing.

Our memory is not always trustworthy. But neither are old newspapers.