In 2009, my sister gave me Agatha Christie’s Secret Notebooks for a Christmas present. My sister and I had always shared our love of mysteries, and we were both huge fans of Dame Agatha.

The book was fascinating. John Curran, who compiled the notebooks and wrote the book about them, helps the reader to see how Christie’s mind worked when she was developing characters and a plot. I found it fascinating to see the notes she had made, written evidence of a writer’s mind at work in the difficult planning and plotting stages of a novel (though some of the notes deal with revision also).

I read them and watch as Christie changes her mind about who is the hero or heroine and about who is the killer. One character may audition as hero before landing in the killer spot. Another may spend a while as killer before being elevated to the protagonist’s position. Settings, titles, and murder methods can and do play musical chairs also. Christie is always seeking the combination of title, setting, killer, and hero that will meld with the perfect method of murder to make a great book.

This book is a great source of inspiration to me when I’m planning and plotting, as I am now. Not that I can use any of her ideas in my own work. They’re very much of her time—each period of time in which she wrote a book over the length of her long life. However, watching her fertile mind work, seeing all the alternates considered and rejected, watching the fantastically successful mysteries come to life always kicks my own brain into high gear.

More than inspiration, though, reading through the notebooks and glimpsing Christie’s mind in the midst of her work confirms for me that it was work. She didn’t come to any of her great, clever books by anything else. Nothing was predetermined. Christie played with combinations of the elements of a good mystery novel until she ended up with something so taut she could carry water in it, and she worked hard to make each book so watertight and startling. 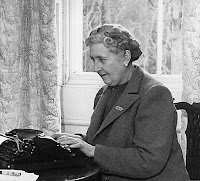 After following the course of her mind for a few of her books, I’m ready to roll up my own sleeves and go to work without expecting to hit the right characters or plot on the first try without effort. I believe it was Albert Einstein who said, “Genius is the capacity for taking infinite pains.” Christie’s notebooks illustrate this perfectly. So, now, I’m off to juggle setting, characters, motives, and murder methods myself, following in her footsteps.

What helps you in the planning stages of your books, if you’re a writer? If you’re not, how do you feel about seeing all of Dame Agatha’s sleight-of-hand revealed this way? Would you rather remain blissfully ignorant of how she managed her magic?

Posted by Linda Rodriguez at 12:06 AM

Yesterday my partner made a comment about a story of mine that was recently accepted for an anthology. She said that she had always liked the story through its many revisions and she especially liked the twist at the end, which had been a feature since the first draft.

I've heard it claimed that some can write great first drafts, but I've always been doubtful. Great writing mostly comes about from great revising, so Agatha Christie's extensive revisions don't surprise me in the least.

I'm mentally plotting a new short story. I know the setting, I know most of the characters. But I haven't settled on a plot--I've considered two different motivations. My research will determine which way I go.

I found the book exactly the same... very inspirational! And it affected me the same way... just helped me look at things differently, kind of like an anatomy book lays the skeleton bare. I cut my mystery-loving teeth on Agatha, and still love her books. I've heard there is a second 'Secret Notebooks' book coming out.

It is always instructional to see how great writers work. I have the notebooks in my library too.

James, I agree with you that great writing comes from great revising. I'm always doubtful also of those who claim their books come in a flow and are perfect from the first draft.

Victoria, yes, exactly! The second book of the notebooks is already out. Curran was up for the Nonfiction Agatha for it. Last year at Malice Domestic, he said that his next project was an uncut version of her autobiography (publishers cut it about in half) with copies of her dictation tapes for it on CD that contained lots of interesting tidbits for those interested in how she wrote.

You're right, Warren. I've collected writers' journals, autobiographies, letters, and manuscript facsimiles since I was in junior high. It's always helpful to see how others manage to work.

I'm sorry I'm so late replying to comments. I've blown out the knee I'd injured and been babying for the past couple of months, so spent hours in ER. I'm on heavy pain meds so may not make it back on here today.

Holy Smoly, Linda. In between comments were you running hurdles? Take care--knee replacements work, but are a literal and figurative pain. We'd rather you take it easy than be off in rehab for two months. I declare the rest of the weekend (until Monday when I blog :>)) BLOG FREE!

I'm sorry, Linda. Well when you do get back, here's my comment. I also love Agatha Christie and bought Curran's book when it first came out and was enjoying it immensely. Unfortunately, I haven't finished it yet. It got gradually buried under book club picks and mysteries I've picked up to read. Your blog makes me want to get back to it.

When reading the book, I was encouraged to see that Agatha Christie didn't have a strictly linear style of story development, or of recording her thoughts (notations about single stories found in more than one notebook).

It gives hope to the scatterbrained among us. ;>

Because I love to know the "why" and the "how" of things, I am eager to read that book.

I read a couple of Christie's books as a young adult. I began to read all the rest of them - one after another after another - when I was recuperating from a really nasty episode of back pain after a fall from a ladder when I was in my forties. Between the pain meds and Agatha Christie, I got through it. When I was back on my feet again, I put aside everything else I was reading and just concentrated on her books until I had read them all. A few years passed, and I became really excited when I discovered titles I had not heard about. I wondered if they were manuscripts discovered after her death. But no...they were books I had already read,and they had been re-released under different titles...the original titles,I believe.

EB, you're a sweetheart! I was pretty out of it most of yesterday, but the other meds are kicking in now, so I can cut back the pain meds.

Actually, I just set my foot wrong as I walked upstairs. I'd injured this knee right before my book launch and had to go on book tour with it a major problem. Probably reinjured it slightly a couple of times. I'm finally finished with book tour and thought I'd have a chance to let it heal finally when this happened. guess my body's going to see to it that it gets a chance to heal.

Gloria, I've read it through a couple of times, but I go back and dip into it here and there all the time. Mostly to inspire myself to keep working even when I can't see the way things will work out. Christie trusted in the process, and it seldom let her down.

Valerie, yes, it does give hope to the scattered (or right-brained) among us! Actually, it's fascinating glimpse into the way the creative mind works.

Deb, you will love it. I'm trying to talk Ben into doing a book dissection group of two with me. We'd choose one of A.C.'s novels and read it, then take it apart scene by scene, including the relevant parts of the notebooks, to see how she did what she did. I always tell students you can't steal wording ever, but the best writers steal technique and make it their own.

I think I'll take a run out to a bookstore tomorrow. This is one of the books on my list; I promised myself that I would treat myself to some new books with my tax refund, and tomorrow is a free day!