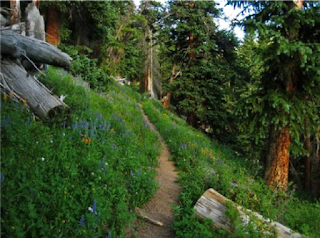 At sixty, I am an aging, which by nature also means a slowing, if dedicated, trail runner. Struggling to breathe while chugging uphill on a singletrack has, for more than twenty years, proven the ideal morning writing break: still time in my head with book-thoughts and character voices but now forced underneath the focused attention required to avoid tripping over a tree root, misjudging the height of a rock step, or slipping sideways off something as innocuous as a fallen pinecone. Trails, like writing, are littered with hazards. Think about the reader too soon and I’m likely to interfere with characters trusting me enough to talk to me. Fail to think about the reader at all and the pacing becomes as slow as an old man’s uphill jog.

I am in the early stages of writing a new book, and reading each day’s production is not unlike scanning the details a trail reveals. Some are obvious—the tree downed by the windstorm last week; the need to allow a larger role for a character whose voice arrives full-bodied and full of innuendo; the deer leg deposited on the trail by a mountain lion or coyote; the necessity for more overt tension to appear in the opening pages to fuel curiosity. Others require greater observation—the appearance of huckleberries hiding on the underside of leaves signaling August has arrived; the dialogue response I wrote unconsciously for a character that reveals her insecure vulnerability; the dust-like smoke lingering in the sun’s morning angle indicating the winds have shifted and the fire burning on the other side of the lake will trouble fire crews; the nagging awareness that a reader will want a chapter break sooner than the voyage of discovery has yet enabled. Signs. Like footprints in the dust of a trail.

I still write the first draft of novels by hand. I find something useful in seeing the labor—the clutter in the margins, words scratched out, filling the hole in the paragraph—and all that ink. A slower pace allows greater vision. It is akin to that moment on a familiar trail where the sky becomes visible through the trees atop a ridge and its appearance, for a fleeting second, feels like peering within another universe. Writing at a slower pace and rereading within the inky clutter, I experience daily instances when a character will say something and offer a glimpse into a critical element of their personality or a glance into their past.

There is something else about a slower pace and heavy effort that links running and writing: At some turn of a switchback—seldom the same one—my thoughts shift from physical labor and from mental clutter, pain falls away, the lungs fill more readily, and a solution to a book problem arrives. People describe the “runner’s high” or “second wind,” and I can testify that the phenomenon is entirely real. For me, however, it offers more than a shift from awareness of labor to internal peace, it also brings clarity to what I am writing. Sometimes the run only reveals an important question. Often, a scene emerges or I hear a passage of dialogue in my head. Frequently I realize how two seemingly disparate parts of a book are related to one another. Once in a while, I see far ahead, like on this morning, when I forget I am running and I realize that the entire story I am telling must be moved backwards by two years, and that the reader must meet a vital character at three distinct moments in time to achieve both the logistics needed and the moment of vulnerability required for the plot to work. The feeling of clarity while running is not unlike moments at the writing desk when a word appears or a metaphor emerges that disclose important connections in the story that had escaped me. Running by letting the body do the work. Thinking by not thinking.

When you live among mountains, uphill runs always mean downhill descents where gravity does the work and labor has a payoff—not unlike the return to the writing desk after five miles of therapy when the pen now seems to possess new energy and lines that began to form among pine scent and trail dust lead to the next page, the next scene, the next chapter.

I require demanding physical exertion at some point in my writing day or my mental health—and thus my writing—suffers. In the depths of winter, when snow and ice keep me off the trails, I move my workouts into the gym where the camaraderie of friends is welcome and a different kind of distraction, yet while the workouts are hard and still reset my mind, they seldom offer the kinds of writing revelations a mountain trail presents like gifts rising out of the earth. 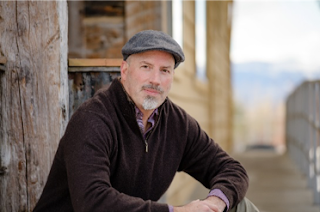 Mark Leichliter is the author of the crime novel The Other Side. Writing as Mark Hummel, his titles include the contemporary literary novel In the Chameleon’s Shadow, the short story collection Lost & Found, and a tragic-comedy Man, Underground is forthcoming from Regal House Publishing in October 2023. He is the founding editor of bioStories Magazine (www.biostories.com), a freelance editor, and an active ghostwriter. A native of Wyoming, Mark lives in Montana’s Flathead Valley. You can learn more about his work at www.markleichliter.com.
Posted by E. B. Davis at 12:30 AM

As a fellow runner and writer, I appreciate this post. I love it when the trail and the mind open and suddenly, you are running toward an epiphany. Exhilarating! Write well, run strong.