A Review of James M. Jackson's Granite Oath by E. B. Davis 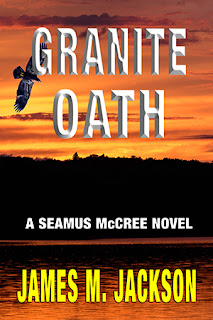 On a Thursday afternoon, Kat Serrano leaves work early, briefly returns to her remote trailer deep in Michigan’s Upper Peninsula woods, and drives off with no explanation to her family. Two days later someone ransacks the trailer.

Kat is a Dreamer, and her mother won’t talk to the police for fear she’ll be deported and lose her 8-year-old granddaughter, Valeria.

Valeria is devastated by the events. She and her best friend from summer camp, Megan McCree, employ a “Pinky-swear” to get Megan’s grandfather Seamus McCree to learn what happened.

Seamus uncovers a tangled web of drugs, prostitution, and dummy corporations, and soon finds himself the target of killers. Anyone sane would wash his hands of the mess or turn it over to the police.

But Seamus has given his word, his granite oath, to learn the truth . . . even if it kills him.

Jim Jackson’s main character Seamus McCree gets himself into situations that are most unlikely, and yet, seem like natural consequences of a normal life. Maybe that’s why I like Seamus. He’s a normal, good guy—he tries to lead a moral life, isn’t a goody-two-shoes, and debates about what actions he’ll take that will damage his soul. In Granite Oath, Seamus babysits his granddaughter Megan at his U.P. residence while his son and daughter-in-law are on a rafting trip in Colorado. At a local art camp for kids, Megan meets Valeria, who is the child and grandchild of illegal aliens—there began his plot and my education.

I didn’t know what a Dreamer was, and, of course, had to try a few times before I got the right definition. Jackson assumes we know more than we do, but that’s okay because it forced me to look up various topics. He provides some explanations, but I wish he would spell out acronyms at least the first time he uses them so we have a clue. I learned about DACA, ICE, a lawsuit found against the state of Texas, Rembrandt, the difference between a pier and a dock (couldn’t confirm that difference via dictionaries), that female eagles are larger than male eagles, there are no poisonous snakes in the U.P. (hard to believe!), UPSET, a thirty-eight-acre fungus (nightmare?), and more. There’s a lot to learn and most of it is fun stuff.

Meth makers who steal propane from local properties used sporadically as vacation camps complicate Seamus’s investigation. Finding Valeria’s mom and protecting and hiding Valeria and her grandmother are Seamus’s main goals. He calls Niki, a former FBI undercover Special Agent and also his lover, to help investigate. Then his half-sister, Colleen, flies in from Boston to assist him by using her accounting skills to audit a business’s books and pole dance. As the plot unfolds, the pace picks up, which means by the time I was half way through the book, I was glued. Seamus’s mom, Trudy, my favorite character, makes an appearance.

I recommend reading Granite Oath. It’s fast paced. Even if you don’t always agree with Seamus’s opinions, you will learn a lot about our immigration laws, agency policies, and the realities of living in Michigan’s U.P.

Sounds wonderful as always. Looking forward to the read

Another Seamus mystery! I'm looking forward to reading it.