My town, Monmouth, Illinois, is a wonderful place to find settings that support my small town mysteries. I’ve lived here since 1968. With a population of 9,900, Monmouth also contributes long-standing relationships that can provide fictional plot twists and generational history.

A few years ago, I wrote Marry in Haste, a mystery with a double plot that went back to the late 1800s. Grace Kimball, retired English teacher, was always running into her former students in her small town of Endurance. Two of them, Abbey and Camilla, started a restaurant called The Depot where some of Grace’s adventures took place. That Depot was based on a real restaurant called Rovi’s, owned by two of my former students in our small town.

Today, their building is occupied by a coffee shop called The Tin Cup. We’re going to head down there.

Join me on my trip to The Tin Cup on this sunny Thursday morning. First, we’ll stop at my bank, which used to be a savings and loan. I’ll wave at the bank president, and he’ll wave back since his office has windows that overlook the lobby. He knows me. Small towns. 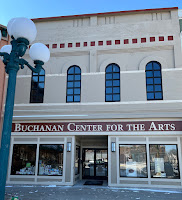 Then it’s on to the Buchanan Center for the Arts where my current series, the Art Center Mysteries, takes place. The building dates to 1870. I’m now on the board there, so I’m aware that we’re planning for two of the town’s annual events: the fall Prime Beef Festival Parade and the Freshman Walkout. The former celebrates our agricultural beginnings, and the latter is a tradition of Monmouth College. The entire freshman class walks a few blocks from the college down to the Square, and they’re treated to all kinds of hand-outs from merchants in the downtown. Armed with bags, they get lots of practical and promotional items, so they’ll learn about the downtown businesses.

Next door is the Warren County Public Library, and we must stop in there and see how Kathy is doing. She’s one of the librarians who encourages me when I’m worried about my current book plot. Betty works there too, and we often joke that she is the president of my author fan club.

Then we’ll drive around the Square, which used to have hitching posts for buggies and horses. We’ll go 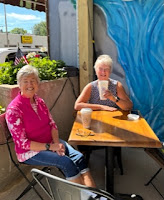 past the old Rivoli Theatre [1938-1998] and the various brick buildings that have stood here since the mid-to-late 1800s. We’ll park and walk toward two friends who are sitting outside the local coffee shop. We must stop and gossip with them a bit. 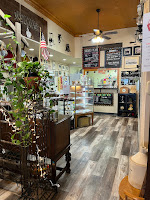 Come on inside the coffee shop, which also has antiques. It’s filled with baskets, spinning wheels, old wall telephones, spittoons, tea pots, a wooden cradle, a 48-star flag, and the original tin ceiling. A table of six ladies is sitting in the middle of the seating area. I know them all, and one of them reminds me I’m speaking to her PEO chapter in September. (PEO is a philanthropic organization for women.) We can order any kind of coffee, but we’re definitely going to have one of their scones. I’m having raspberry and white chocolate. You can have your choice of blueberry or lemon or white chocolate or apple/cinnamon. 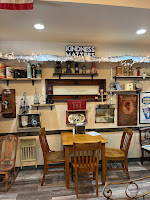 A few weeks ago, the Tin Cup had live music by a group called No Reason. The lead singer is the wife of one of my former students who now teaches at the college. As they sang, store owners Mike and Janice began dancing between the tables and right out the front door. It was magical. He hollered that he never missed a chance to dance with his wife. Small towns.

And now we’re meeting one of my former students who’s come back to town from Indiana to see family. He contacted me on social media and asked if I could sign a book for him and meet him for a cup of coffee. Of course. In the last two months, I’ve met former students from Indiana, Ohio, Minnesota, Missouri, Iowa, and Korea [he’s in the U.S. State Department there]. This meeting is with a minister from Indiana who tells me he never realized how much my high school speech class would help him. I try to hold in a tear or two since it’s nice to be remembered and appreciated. When I have a new book launch, I often hear from these adults that used to be teenagers who come back to town for a reunion or to visit family. Social media, thank you.

Small towns not only have time-remembered traditions, but they also contain myriad relationships crossing many years and generations that are handy for creating twists and turns in mystery plots. The local coffee shop is a major source of fictional twists. The idea from that coffee cup that says, “Don’t annoy the author or I’ll murder you in my next mystery,” is obviously quite true.

This is fabulous, Susan. I grew up in a small town, the day I smoked my first (and last) cigarette (carefully concealed behind the wall at the end of a tunnel to a parking lot) my mother got 19 phone calls and I got an earful when I got home, no matter that both my parents smoked! It was like that, and it offered a great and secure place to grow up. Small towns are what draw me to cozies. They are comforting and things make sense. A sense that has to be restored when crime occurs.

Ha ha. Yes, Kait. Me too. When I first got my driver’s license I was stopped for speeding. The cop asked if I was the daughter of my dad and I said yes. He told me he would let me go with a warning but I’d better tell my dad before the cop saw him again. Yes. Everyone watched out for you. The winters I lived in Phoenix were just not the same. So, yes, my settings are small towns.

My dream of dreams is to live in a small town like this! It's why I write about them now :)

I've lived in small towns in different places and set my mysteries in the Ohio version. Pristine, relentless charming, a gentile layer of life on top of crime and despair.

You've captured the heart of why those of us who write about small towns do, Susan, and you've shown why your books are so good and relatable. Nicely done!

We lived in Fairfield, PA, for 30 years. A main street; maximum of two blocks past it; volunteer fire department; one pre-K-grade 12 school building.

So many people, so many small towns. When I grew up, I lived in Galesburg, Illinois, which had a population peak of about 30,000. Lots of factories. When Maytag left for Mexico, taking 4,000 jobs with them, the area was decimated. I predict that long after I'm gone, those who left for the warmer climates, like the Southwest, will be moving back to the heartland because there won't be enough water to sustain them, and the climate will be so hot they will not be able to live there. Guess we'll see.