Death on a Cliff Title Anagram

I thought I would take Meri Allen/Shari Randall’s lead and also do a title anagram for my most recent release! My second contribution to the Aloha Lagoon series, Death on a Cliff, was released this week. Kiki Hepburn is back, continuing her diving adventures and solving another mystery with Dex, Auntie Akamai, and Paulie at her side!

E--Evidence points at her ex-boyfriend, but did he do it?

H--Humuhumunukunukuapua'a is Hawaii’s state fish, also known as the reef triggerfish. Also making an appearance are Honu and jellyfish.

O--Our heroine is Kiki Hepburn, recovering socialite and dive tour leader, and she’s on the case!

N--Nerdy professor is involved—is he the killer? Or just unlucky?

A--Amazon parrot Paulie is back, talkative as always.

C--Classy purse for a less than classy lady.

L--Love gone wrong…or did it?

F--Flashy sports agent could be a suspect. 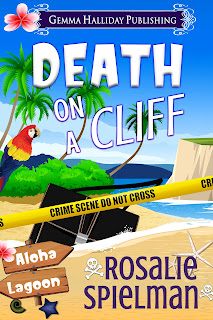 Former socialite Kiki Hepburn is happily settling into life with her new found-family in Aloha Lagoon, Hawaii—working at Aloha Lagoon Dive Shop, living in a cottage in Auntie Akamai’s back yard, and getting to know the hot dive guy Dex a whole lot better.


But all that changes when Dex’s longtime friend and former football teammate, “Tiny” Anelo, comes home to Aloha Lagoon, celebrating being an NFL draft pick. Tiny is surrounded by an entourage, but not all of his hangers-on are admirers—most notably Tiny's ex-girlfriend, Delany. While no one seems happy to see her, Kiki is still shocked when Delany's body is found lifeless in the meadow at the top of a jagged cliff.

It's clear someone has murdered the young woman. And when Kiki unwittingly provides the police with evidence that points to Tiny as the killer, Dex begs her to try to help his friend. It's a request she can't ignore, even if the list of people who wanted Delany dead is longer than a late night luau. Between a smarmy sports agent, an obsessed fan-slash-“best friend,” and a former college professor, Kiki finds no shortage of motives. And the plot only thickens when a second dead body shows up, along with a mysterious clue in the form of a Hermes handbag. With the clock ticking and the police closing in, Kiki finds herself in deep water... can she tread water long enough to catch the killer?

Nicely done, Rosalie! Such a fun way to draw attention to a book.

Well done! I love these posts.

Thanks for sharing the fun project!