Reading Rather Than Writing 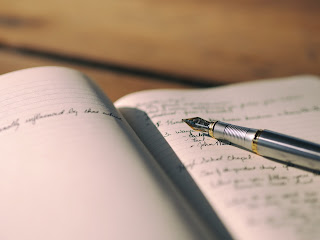 I have fallen prey to the very thing Emerson warns against for writers. Frantically collecting and reading book after book, absolutely sure in my insecurity about my haphazard education–the bane of the autodidact–rather than my talent (about which I'm both too confident and too humble), that I must learn more and more and more before I can write the correct thing in the correct way. Time to stop that!

I have stumbled into this trap many times before and had to drag myself out by the scruff of the neck and the order to just write. And so I must do once again. Of course, it's easier to read all the books about writing. I must have read hundreds in my life. And all the books on various subject matter. There, the total must be in the thousands. So when will I deem myself educated enough to write?

I took extra courses during my two degrees (late in life) in creative writing and English literature and graduated with honors. When will I know enough to write? I've written and published over 13 books in various genres and hundreds of poems, stories, articles, and blog posts through the years. I've won awards, grants, residencies, prizes, not to mention the top New York agent and a three-book contract with one of the Big Four trade publishing conglomerates. Am I worthy enough to write yet?

Why do I still willfully plunge into this debilitating trap, which sabotages my career and the thing I love to do most in the world? I know from discussions we have had that other writers have the same problem. Obviously, it has troubled writers for more than a century, if Emerson was warning himself and other writers about it.

I must dust off the old techniques and strategies that I have used successfully in the past to circumvent this obsession. Such strategies include timed freewriting, brainstorming on paper, setting up writing challenges, journaling and practicing writing exercises (much like playing the scales on the piano daily), and allowing myself to write badly, if necessary. Also, I must not forget setting up rewards for myself, especially time allowed on some secret passion project.

If reading about writing or researching topics rather than actually writing is a problem for you, what techniques do you use to get past this and create words on the page?

Linda Rodriguez's 12th book, The Fish That Got Away: The Sixth Guppy Anthology, recently published. She also edited Woven Voices: 3 Generations of Puertorriqueña Poets Look at Their American Lives, The World Is One Place: Native American Poets Visit the Middle East, Fishy Business: The Fifth Guppy Anthology, and other anthologies. Every Family Doubt, her fourth mystery featuring Cherokee detective, Skeet Bannion, Revising the Character-Driven Novel, and Unpapered: Writers Consider Native American Identity and Cultural Belonging will be published in Spring/Summer 2023.

Rodriguez is past chair of the AWP Indigenous Writer’s Caucus, past president of Border Crimes chapter of Sisters in Crime, founding board member of Latino Writers Collective and The Writers Place, and a member of International Thriller Writers, Native Writers Circle of the Americas, Wordcraft Circle of Native American Writers and Storytellers, and Kansas City Cherokee Community. Learn more about her at http://lindarodriguezwrites.blogspot.com or follow her on Twitter at https://twitter.com/#%21/rodriguez_linda.

I try lowering my writing goals. Instead of trying to write a whole chapter, I write a third or a half. As time goes by, I get back in the zone.

If you feel this way, Linda, there's no hope for the rest of us!

I also cut myself slack if life intervenes.

I can get enmeshed in books on the craft of writing, but I can also get hooked on compulsively reading books by an author I admire, trying to figure out what it is that makes them speak to me so completely.

At some point, though, I just have to put other people's work down and do my own work.

I think you should stop reading those books. Better yet, write one yourself!

Oh, boy, this is me, too! Sometimes I give myself a little treat of poetry, just one poem, - something I definitely don't feel worthy to write - and that seems to ease my reentry to writing fiction.

Susan, that's a terrific idea. A very successful horror writer I know, Steven Graham Jones, was once asked how he managed to be so prolific, and he replied, "I just lower my standards."

Aw, Elaine, better writers than I have run into this problem before. I think it may be a universal problem for writers.

Margaret, as usual, I love your suggested remedies. Chocolate and slack are just what everyone needs.

Kathleen, yes! It's not just the books on craft, but the books by writers I admire and I'm trying to learn from.

Marilyn, finally enough, I have written a book on the craft of writing and actually have a couple more in the works. If I ever stop reading other people's books, that is.

Shari, actually reading poetry always sets me to writing poetry, but unfortunately not anything else. And poetry is not what I need to write, at the moment.

Also, Shari, I will argue with your assertion that you are not worthy to write poetry. I know a lot of people feel that way, but it's just wrong. In this country, we have set up poetry so that it is supposedly something just for the elites and primarily in the academy, but poetry is something that should be accessible to everyone. Everyone's heart has poetry in it, and each of those people can learn to set it down on the page. This is a hill I will die on. And I have taught many poetry workshops to people who felt like you who wound up being surprised at the wonderful poems that they came away with.

This is such a problem, Linda, but I take comfort and strength in knowing that so many other writers deal with it, too. I don't know that I have a really satisfactory way of dealing with it. Susan's approach - lowering my writing goals - helps. Fear of missing a deadline helps too. I often write in fear. I'm not sure that's healthy, though.

Molly, yeah, writing in fear is not a great way to go about it, but I suspect it's a way a lot of us have gotten used to writing our books once we have our first contract out of the way. I'd like to change that for myself, and I hope I'm going to be able to. We shall see.