An Interview with Dianne Freeman by E. B. Davis

On the eve of her marriage to George Hazelton, Frances has a great deal more on her mind than flowers and seating arrangements. The Connors and the Bainbridges, two families of American robber barons, have taken up residence in London, and their bitter rivalry is spilling over into the highest social circles. At the request of her brother, Alonzo, who is quite taken with Miss Madeline Connor, Frances has invited the Connor family to her wedding. Meanwhile, Frances’s mother has invited Mr. Bainbridge, and Frances fears the wedding may end up being newspaper-worthy for all the wrong reasons.

On the day itself, Frances is relieved to note that Madeline’s father is not among the guests assembled at the church. The reason for his absence, however, turns out to be most unfortunate: Mr. Connor is found murdered in his home. More shocking still, Alonzo is caught at the scene, holding the murder weapon.

Powerful and ruthless, Connor appears to have amassed a wealth of enemies alongside his fortune. Frances and George agree to put their wedding trip on hold to try and clear Alonzo’s name. But there are secrets to sift through, not just in the Bainbridge and Connor families, but also in their own. And with a killer determined to evade discovery at any cost—even if it means taking another life—Frances’s first days as a newlywed will be perilous indeed . . . 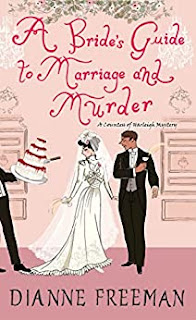 A Bride’s Guide to Marriage and Murder is the fifth book in the Countess of Harleigh mystery series written by Dianne Freeman.

It’s a fun read, one anticipated since the first book in which main character Frances’s first husband was murdered. It wasn’t a good marriage anyway, and her future second husband helps her solve the crime. They’ve been partners in more than one way ever since.

Even though there was no way they could travel to Cannes for their honeymoon, I felt sorry for them for the entire case. Not only due to the lack of a honeymoon, but also for Frances’s family being so obtuse after their wedding. Due to living next door, they see no problem with dropping in on them at every hour of the day. No honeymoon and at the beck and call of their concerns. Even if a second marriage for her, they needed some time for romance!

Before I forget—did I mention that all of the previous books in this series are now available on Kindle Unlimited. You bet it is worth the monthly price of $10.66. Stock up on these beach reads before the summer is over.

Since Frances and her daughter, Rose, are moving to George’s house next door, Aunt Hetty has purchased the lease on her house. I thought Frances bought the house. Is the house leased from an absent owner? 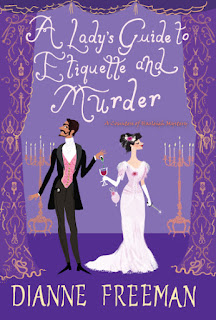 You could say that. At the time the majority of Frances’ neighborhood of Belgravia, along with Mayfairand other sections of London, 300 acres in total, was owned by the Grosvenor family—the Dukes of Westminster. Lessees would pay for the construction of a building, its upkeep, and any taxes for a contracted period of 99 years. Leases were often extended 30 years at a time, but at the end of the lease, everything on that property reverted to the Grosvenor family, who would then resell the leasehold. That’s what Frances bought. The British government changed the leasehold/freehold laws in 1967, but that only made a small dent in the family’s holdings. Even the US embassy sits on land leased from the Grosvenors. (If anyone is interested in following Frances’ lead, the current duke is single and only 32 years old.)

Frances calls her father, Frankie. Why not, Dad?

Frances’ father’s name is Franklin. Frances is his firstborn and namesake. They call each other Frankie as a sort of endearment.

Were the Bonanza Barons real? What was the source of this wealth?

They were real, but were actually called the Bonanza Kings. John Mackay, James Fair, James Flood & William O’Brien formed an alliance and took control of the “Consolidate Virginia” and “California” silver mines. Many considered those mines to be barren, but in 1873 they hit the greatest mining strike in the history of the American West—the Big Bonanza. The four partners became millionaires many times over.

You based two characters, feuding American business men, on real characters. Tell our readers about them, please.

The feud between John MacKay and Charles Bonynge was fascinating, but for the sake of space, I’ll only hit the highlights. As noted above, John MacKay was one of the Bonanza Kings. Charles Bonynge made his fortune in mining related businesses. Both men came from humble beginnings, immigrated to the US, made their fortunes from silver, and for a time, Bonynge was MacKay’s stockbroker. Upon retiring, Bonynge made a critical comment about MacKay’s business ethics to a reporter. MacKay took exception and the feud began.

Both families had homes in London and they all showed up for the social season. The evening before the Bonynge family were to be presented to Queen Victoria, one of the newspapers revealed that Mrs. Bonynge had been divorced and therefore was ineligible to meet the queen. The Bonynges fired back and gave a reporter the story of Mrs. MacKay’s humble past as a washer woman. This back and forth continued, much to the delight of the gossip columnists, for four years. It ended in a fist fight between the two men in the office of a San Francisco bank. 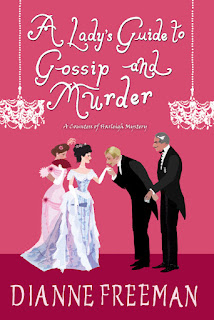 Both feuding men and their families are invited to Frances and George’s wedding. How did that happen? Too many wedding managers in addition to the bride?

Exactly. Frances invited the Connors as a favor to her brother, Alonzo, who had developed an interest in the daughter of the family, Madeline. Meanwhile, Frances’ mother, who had commandeered all the wedding plans, invited Mr. Bainbridge without letting Frances know. Oops.

I didn’t understand the early photographic process. What’s with the glass blocks?

They are actually thin glass plates and they are the film base, very much like the polyester screen that is used in an X-ray machine. The emulsion-coated plate fits in a slot in the camera and when exposed to light, it captures the image on the other side of the camera lens. Glass plates were replaced by a celluloid film base, which was itself replaced in the 1950s with polyester or mylar film base. These are the negatives from which a photograph is made.

It was a catch-all term for lower back pain.

Why did the Victorians make so many collections, especially of gross stuff such as impaled insects and taxidermy?

I’m sure their reasons were as varied as the collectors, but I think it’s safe to assume their collections and cabinets of curiosities were conversation starters. Victorians entertained a lot. Each item in a collection came with a story, even in a collection of insects. The collectors hoped to enthrall their guests with those stories. (“Can you believe a single bite from this spider could fell a full-grown man?”) The collections were tangible proof of their travels to exotic places or even of their intellectual curiosity.

When Frances’s brother, Alonzo, is arrested for one of the feuding men’s murder, father Frankie tries to bribe the police to release Alonzo. They are not amused. Was this common practice in the US?

The New York City Police Department was notoriously corrupt at the time. Theodore Roosevelt became police commissioner in 1895 and by 1897 he gave up all hope of reforming the department. It was not uncommon to offer a reward or bribe to the police to urge them to investigate a crime, or turn a blind eye.

Did homes have a system of bells to alert staff that they were being summoned and where?

Yes, although electric bells were often installed in newer homes, most homes that employed a staff still relied on sprung bells. This device, worked by a complex system of wires, allowed for a member of the household to pull a lever, thereby ringing a bell located in the service areas. The bells would be mounted on a board and labeled with the name of the room where the wire originated so the servant would know who rang or where they were needed.

I’m surprised Americans were so enamored of British titles that they threw money and their daughters at titled ne’er-do-wells. What was the big deal? Were they pawning their daughters? 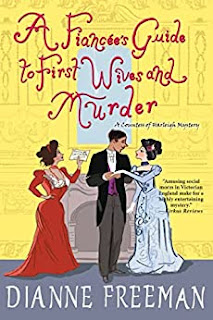 These marriages were something of a business transaction. Most of the families who followed this practice were treated as outsiders in the cities where they lived. New York, Boston, Philadelphia, even San Francisco all kept their social circles exclusive. It didn’t matter how well-educated, well-traveled, and well-polished their daughters were. No new money families and no robber barons were allowed. However, once the family included an aristocrat, the became more acceptable. It was also a good way to find husbands who were intellectual equals for their daughters. Since polite society was closed to them, they were unlikely to find one at home. As far as the ne’er-do-well men—there were plenty of them to be found in America too.

What were hair “rats?”

Rats were small netted bags filled with one’s own hair and used to provide volume or a base for the elaborate hairstyles of the day.

Frances and her mother have two very different versions of reality. Frances feels controlled and over managed by her mother. Her second wedding shouldn’t be the big deal her mother is making of it. Her mother feels neglected by her husband and has connected to Hetty, Frances, and Rose during her stay. Which has a truer version of reality?

This feels like an existential question! Both realities are true depending on whose shoes you’re standing in.

Is claret still made? Was it like a Merlot? Cabernet sauvignon?

“Claret” is simply the name the British gave to the light red wines that came from Bordeaux back in the 12th century when Bordeaux was part of Aquitaine. It was enormously popular in Britain and remained favored among British gentlemen well after France won the territory back and until the 20th century. There are still some labels that sell claret and because the name is protected by the EU, it would still be made with grapes from Bordeaux.

Frances and George are not assisting Detective Delany. They’re on opposite sides. Does this affect their relationship?

Though it’s uncomfortable for all of them in the moment, Frances and George understand Delaney has to do his job. He understands their need to investigate. In the end, they all want the guilty party apprehended.

What is a tantalus?

It can be a cabinet or just a stand for decanters of liquor. What makes it tantalizing, is that while the decanters are visible, you need a key to access them.

What’s next for Frances and George?

With George on a mission for the British Museum, Frances agrees to sponsor Lady Wingate’s niece, Kate, for a presentation to Queen Victoria. Since her husband’s death, Lady Wingate has been so lethargic, she hasn’t left the house for months. Her friend, Lady Esther, is convinced one of the woman’s step-children is drugging her and tapping into her fortune. Kate isn’t above suspicion either. She’s about to enter high society and stands to gain an inheritance upon her aunt’s death. Hundreds of young ladies would kill to be in her shoes. Frances has to wonder if that’s exactly what’s happening. She, George, and Lady Esther join forces to flush out the villain and keep Lady Wingate from following in her husband’s footsteps—directly to the grave. 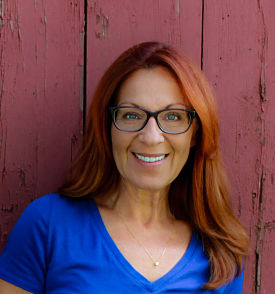 Congratulations on your new release! I look forward to reading it. Elaine, terrific interview.

Wonderful interview. Your books sound like fun, Dianne. Glad you stopped by WWK today and added to my TBR list!

Looking forward to reading this. The entire period of English social history is so intriguing.