An Interview with Heather Day Gilbert by E. B. Davis

“You know they’re just going to waste it on alcohol or drugs, BB,” she’d say,
using my initials as a pet name to soften me.
I didn’t really care how the homeless spent it. All I knew was that I had a
little money and they didn’t, and I couldn’t walk on by and do nothing.
I felt the same way about Margo’s death. I’d found her, so it seemed I should
go one step further and search for the one who’d viciously strangled her.
Heather Day Gilbert, Belinda Blake and the Snake in the Grass, Kindle Loc. 587

Pet-sitter Belinda Blake doesn’t rattle easily, but move-in day has been eventful, to say the least. The python in her care tried to slither to freedom—just as she met Stone Carrington V, her landlords’ disarmingly handsome son. With the constrictor back in its cage, she heads out to the garden, only to discover a designer shoe poking out of the boxwood hedge—attached to a woman’s dead body.

The victim, Margo Fenton, was a Carrington family friend, and no one in their circle seems above suspicion. Between client trips to Manhattan and visits to her family in upstate New York, Belinda begins to put the pieces together. But though she’s falling for Stone’s numerous charms, Belinda wonders if she’s cozying up to a killer. And soon, daily contact with a deadly reptile might be the least dangerous part of her life . . .
http://heatherdaygilbert.com/books/belinda-blake-and-the-snake-in-the-grass/ 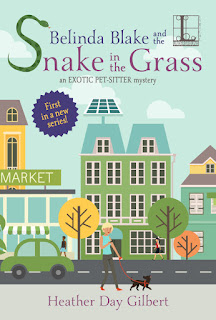 Heather Day Gilbert’s Belinda Blake and the Snake in the Grass, her first Exotic Pet-Sitter mystery, is also her first traditionally published mystery. She’s self-published many novels and has written a nonfiction book on self-publishing. She’s also garnished a few nominations and awards in faith-based fiction. To me, that’s an interesting way to get traditionally published.

Belinda Blake, Heather’s main character, pet-sits for exotic animals. When she moves from NYC to tony Greenwich, Connecticut, her rental is a carriage house on the Carrington family’s estate. Behind the carriage house is a garden, which seems to grow corpses. In life, those bodies were friends of the estate owners’ son, Stone Carrington V. He has lots of issues. Whether or not he is guilty of murder is Belinda’s problem. Her family, in upstate NY, is wary for her.

How and why did Belinda start her pet-sitting business?

Belinda is the kind of person who doesn't relish a desk job. She likes adventure and is easily bored, so she kind of stumbled into sitting exotic pets when she was sitting more "normal" pets in Manhattan. She's comfortable with many kinds of pets because her father, who lives in upstate New York, is a veterinarian and she grew up working in his office and going on house calls with him.

What is Belinda’s sideline business?

She's a video game reviewer. As the series progresses, this aspect of her life starts to take on a bigger role, as her blogposts/articles become extremely popular in gamer circles. I grew up with video games and I still enjoy playing in my free time, so the gamer side job was quite natural for me to write about. 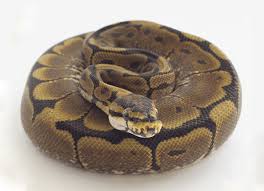 Although Belinda doesn’t seem fearful of Rasputin, a ball python, she also doesn’t seem very knowledgeable about snakes other than what the owner has told her. Is lack of fear the best attribute of an exotic pet-sitter? Does she have experience?

She does have some experience with unusual pets—after all, her dad was a vet in an area where farms are par for the course, so she's been around cows, chickens, and more. But in this book, we see this is her first encounter snake-sitting. She does her research ahead of time and she consults her vet dad before accepting jobs, and in this case, the doting snake's owner gave her a bullet-point list of expectations for his snake's care. :) She basically goes into it ready to follow the owner's wishes, because that's why he's paying her the big bucks!

Belinda knows Rasputin is a constrictor. Why would she allow the snake to rope itself around her neck? Is she suicidal?

I think she likely watched the same kind of YouTube videos I did, where you'll see ball python owners handling their snakes and allowing them to slither around on them (or even watch TV with them!). She was also following the owner's careful instructions about "walking" his pet so it could get fresh air. And Belinda's personality is not one given to fear. She's done some riskier things in her life, so this is just another on her list. She tends to dive into things before realizing she might be in over her head.

Why do ball pythons need humidity? How often do they shed? Eat?

From what I can tell in my research, answers vary with each snake. Some advise bathing the snake (as Belinda does in this book), and some don't. Some advise feeding rats, some mice. The pythons need humidity as they gear up to shed, which can be once a month, with younger snakes shedding more often and older snakes shedding less often. Feeding can vary, as well, but can be every ten days, give or take.

When Belinda finds Margo Fenton’s body in her garden, why doesn’t she just dial 911?

Hm. I'd have to reread it, but she might not have had her phone, and there are people milling around nearby at the manor house where the owner lives, so she runs for help first. Greenwich is a very exclusive town and I suspect she wanted to make sure the homeowners knew there was a dead body in their yard and see how they wanted to proceed, especially since she'd just moved into their carriage house and the Carringtons have a private security team. But the bottom line is that she was probably in shock, despite keeping a relatively cool head when she discovered the body.

Do formidable people usually have something to hide?

I wouldn't say that—I've known many formidable older people who are quite transparent. On the other hand, I'd say many people are hiding at least one thing. 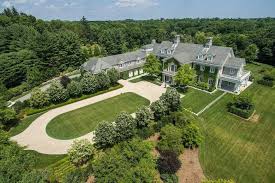 Stone Carrington V is about Belinda’s age. Why does he start to investigate Margo’s murder?

He was a close family friend of Margo, and he regularly played pool ("billiards") with her. He wants to know why she died on his family's estate.

How is Katrina, Belinda’s older sister, who is an Albany psychologist, the direct opposite of Belinda?

Katrina is quite practical and has a "mama bear" personality—she's always advising Belinda to be careful. Belinda, of course, rarely listens. Katrina instinctively distrusts people, and Belinda tends to trust a little too easily. Katrina has always been an over-achiever, and Belinda is a fly-by-night personality who really doesn't plan ahead. And in looks, Katrina has dark, curly hair and porcelain skin, whereas Belinda has curly naturally blonde hair and freckles/light tan. You'll see how their personalities work together as the series goes on—Katrina often helps her sister by giving her take on the possible psyches of the murderers.

Why didn’t Belinda go to college?

Actually, she did, but then she went directly into the Peace Corps in China. Predictable jobs don't interest her much.

When Stone asks Belinda to help him interview mutual friends of his and the victim’s, Belinda thinks of the outing as a date. Why?

That would be because Stone set it up that way, at a very posh restaurant, etc. He also seems to be hitting on Belinda from the start of the book, which tends to confuse things for her. After all, he is incredibly rich and handsome, but he's also approachable, even though he's the "lord of the manor," so to speak. She's impressed he's so rich and yet so friendly to her. She instinctively likes him...but sometimes Belinda's instincts are wrong. ;) Still, she's not the type to sit around second-guessing herself when she likes someone.

Tell readers about Red, my favorite character, if you would?

I like Red too. Let's see...you'll get to know more about Red in the second and third books, so I'm not sure how much to tell! Let's just say he's a chauffeur, but he seems to carry out some bodyguard duties along the way. He used to be in the Army before he took the chauffeur job with the Carrington family.

Even though Belinda finds out Stone has kept secrets from her, she defends him to her mother, sister, and an old friend from back home, Jonas Hawthorne. Why does she have faith in Stone?

Again, Belinda kind of acts on her instinct about people, and she tends to look for the good in people (unlike her sister). She likes that Stone isn't stuck-up and that he seems to genuinely enjoy her company, even though she's not a Greenwich socialite.

Why does Belinda need alone-time?

She's a bookish introvert, so give her a rainy day, a book, and a cup of coffee, and she's happy. She doesn't love big groups, but she's great one-on-one with people. Sometimes I think she doesn't realize how winsome she is, because she spends a lot of time feeling she's messed things up. Like most introverts, she needs time alone to decompress and process the events of the day.

What’s next for Belinda? 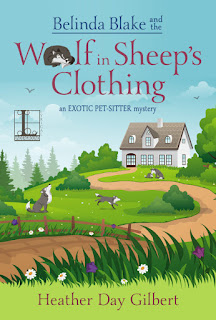 She's about to accept a rather dangerous job at a wolf preserve. I had an absolute blast researching for book two, Belinda Blake and the Wolf in Sheep's Clothing, which is available for preorder here and will release this October. And she'll have another adventure—book 3 releases in February of 2020. I'm hoping this series will do well and I can write even more books about Belinda, because she's so fun! 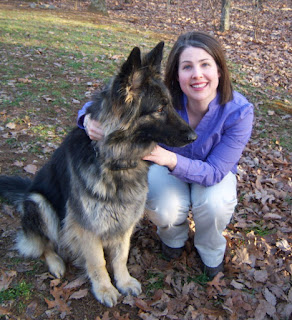 Sounds like a delightful book, one right up my alley.

I'm also interested in your journey from indie to trad and hope you will come back and talk about that sometime.

Congratulations on your new release! I fear and loathe snakes (especially after 15 years in Georgia copperhead country), but appreciate both the novelty and the chance to educate people about snakes.

I love mysteries with animals. A snake, though, is a new one on me.

Like Margaret, I have to keep an eye out for copperheads (hiking boots any time I'm in an ungroomed landscape. I have a brother-in-law who swears by his snake chaps.)

Great picture of the lovely shepherd.

The series will be a fun read. Thanks so much for the interview, Heather. Keep them coming!