A Murder of Crows 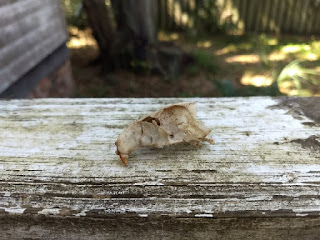 During the first week in my new home, I received several lovely housewarming gifts—a bottle of wine, a jar of preserves…and a tiny, pristine squirrel skull left on top of my deck post.

I don’t know which backyard denizen to thank for the present, but I suspect the crows. They are the UPS delivery crew of the marsh, toting bits of this and that here and there, usually in search of tasty tidbits but sometimes just for the heck of it. Or so it seems to me, watching them from my deck, dark and sleek against the Spanish moss and live oak leaves.

The crows in my yard announce their presence with a raucous “caw caw caw,” which is my cue to toss some unsalted peanuts their way. When I’ve delivered the goods, they use a different call, one that doesn’t match any of the recorded crow sounds on the Audubon site. It’s a lilting “kree-oh, kree-oh” and I suspect it’s their mimicry of my pathetic attempts to caw at them. I also suspect they’re laughing at me behind their wings, like Parisians do when Americans try to speak French.

Traditionally, a flock of crows is referred to as a “murder.” My etymological research revealed that this usage traces back to the 15th century, when the idea of creating fancy collective names for groups of animals first became popular. These terms of venery (historical vocabulary referring to the hunting of game) were more poetry than science. Owls gathered in a parliament, peacocks in an ostentation, and ravens in an unkindness. The name for a bunch of geese depended on what they were doing—on the ground, they were a gaggle; on the water, a flock; and in the sky, a skein.

Biologists dismiss these terms as quaint hooey. For ornithologists, birds form families and flocks, not flamboyances and murmurations. Crows are no different, their dark epithets notwithstanding. And as much as I love murder—in the literary sense, I hasten to add—I agree with the scientists on this one. Crows are no more murder-y than any other animal (tiny skull on the deck notwithstanding). In fact, they are intelligent, creative, and devoted to their families. They make tools, recognize human faces, and are not above theft and manipulation (check out the YouTube video of a crow stealing a credit card at a Japanese train station, attempting to use the card at a ticket kiosk, and then, frustrated, giving the card back to its rightful owner). Crows feed family members when they are sick or injured, and they form tight-knit families, with newly adult birds staying on to help their parents raise the next generation. They can live almost twenty years, though they rarely nest in the same spot twice. And when they do murder—which is rare, but documented—it’s for reasons, infidelity being one of their recorded motivations.

I’m grateful to have them in my yard, grateful even more that we have some kind of relationship, these birds and I. Their delicate, bony gift was either a generous welcome, a flagrant bribe, or a thinly veiled warning. I plan to keep the peanuts coming regardless.

Crows are fantastic tricksters, but I never knew they murdered! How lovely that they brought you a housewarming. A unique seal of approval.

I like crows, but not at 5am when they convene to wake up the world. Smart and sassy, without the running commentary of mockingbirds. Keep those peanuts coming!

After a die-off due to West Nile disease, our crows are making a comeback. They are fun to watch, although they are bullies. We did have a pileated woodpecker take them on one afternoon and the crows (probably wisely) decided to leave.

I learned bunches about them when I took the online All About Crows course through Cornell's Bird Academy. The instructor said he preferred to call them " a bouquet of crows" though he admitted that usage hasn't caught on. They have several courses, which you can check out here: https://www.birds.cornell.edu/home/

Our crows get along well with the rest of the backyard -- no bullying, no fighting. I learned that while yes, they do murder, it is an EXCEEDINGLY rare event, documented only twice in this particular ornithologist's research. And the case went unsolved, though the researchers had strong suspicion as to the culprit and motive -- a nest-usurping male. Mostly they are very caring to each other -- the West Nile hit them especially hard because they tend to feed weak or sick members of their groups, and so they caught it very easily. The ornithologist said they were spared even worse devastation because West Nile drops birds so fast that they didn't have time to care for each other. Which stuck me as incredibly sad.

I've learned a lot from watching them, and I hope they hang around for a while.

Evidently your crows are more than happy to co-exist in your yard. I can see why watching them would be great entertainment!

I love crows. And when I see only one, I gleefully announce that I just saw an attempted murder!

You have a very crow-ish sense of humor, Annette!

Interesting blog, Tina. I read how intelligent they are. I also read that they remember kindnesses and harm people do to them for up to six months. So stay on their good side.

I'm out there with the peanuts everyday. EVERY day. Just to make sure.