A Surfeit of Pills by M. S. Spencer

My first novel—which unfortunately went into the circular file by accident—envisioned the murder by poison of the director of the Environmental Protection Agency. This was before the internet, so my research was done at the library. Luckily, I happen to be a reference librarian so it was fun and productive. Like most murder mystery writers, I’m constantly searching for the impossible crime—the locked room, the body on the top of the George Washington Masonic Memorial, the mysterious stranger found shot on an empty train—and the perfect weapon—the untraceable poison, the frozen leg of lamb. So it was that I found myself leafing through the Physicians Desk Reference, and discovered that acetaminophen is actually seriously dangerous. As my doctor said, “You can eat a truckload of aspirin and need your stomach pumped; eat a bottle of acetaminophen and you die.” Whew!
I didn’t use it then. But I will someday.
I actually want to write about writers in my books. I have published twelve mystery/romantic suspense novels, but so far I only have one story with both a writer as villain and another as hero. Rancor Bass (Really! His father was peeved at having to welcome a sixth child into the family) is a famous author of mysteries. He’s also a pill. He teams up with another writer—Charity Snow, ace reporter—to solve a hundred-year-old mystery in The Pit & the Passion: Murder at the Ghost Hotel. 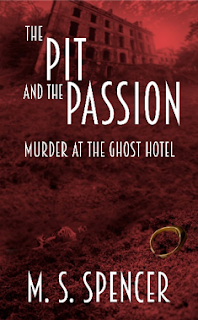 Here’s the blurb:
At midnight, in the darkness of a deserted hotel, comes a scream and a splash. Eighty-five years later, workmen uncover a skeleton in an old elevator shaft. Who is it, and how did it get there? To find out, Charity Snow, ace reporter for the Longboat Key Planet, teams up with Rancor Bass, best-selling author. A college ring they find at the dig site may prove to be their best clue.
Although his arrogance nearly exceeds his talent, Charity soon discovers a warm heart beating under Rancor’s handsome exterior. While dealing with a drop-dead gorgeous editor who may or may not be a villain, a publisher with a dark secret, and an irascible forensic specialist, Charity and Rancor unearth an unexpected link to the most famous circus family in the world.
Along the way Rancor enlists his circle of author friends. He asks Charity to get in touch with them. Here’s his description of them:
“First off is Atalanta L’Amour— she writes shapeshifter vampire erotica. You’ll like her. Number is 212-555-6438.” He waited for her to write it down. “Got that? Okay, next is Holdridge K. Wheelock, the essayist.”
“Wheelock. Didn’t he write that parody of Zen and the Art of Motorcycle Maintenance?”
“Yes and no. He didn’t mean it to be tongue-in cheek, and when it was roundly criticized as not zany enough, he took offense. He’s at Dontugetsatireumoron-at-HoldridgeKWheelock-dotcom. I’d better spell that out.” He did.
“Is that it?”
“No, two more. I want to descend on the French judicial system like an Ottoman horde. Besides, you may only pry one or two of them from their nests.”
“Typical writers then?”
“Hey!”
“Names, please.”
“All right, but you better promise to treat them with respect. And don’t forget the kid gloves. Third is Jemimah Heartsleeve.”
“Oh, I read one of hers. Not bad. What’s that genre of romance called? Something about steam.”
“Steamy. Or did you mean steampunk? Yes, a reviewer back in the nineteen seventies told her she has a voice, and she’s never let anyone forget it. However, when aroused, she’s like a marmot with a bone, or whatever they gnaw. She lives in a hovel.”
“A hovel?”
“Atalanta’s assessment, not mine. That dyspeptic snob looks down her imperious nose at a house with a mere twenty rooms and only one indoor sunken garden. What’s worse, it’s in that bastion of rebel resistance, Charleston.”
“A step up from a rusty beach chair, I’d say.”
“Yes. Well. Her number is 843-555-2337…Ready? Last but not least is Bernard Guttersnipe (not his real name). Styles himself a modern progressive. In other words, he writes depressing novels with wholly unlikable characters and plots so vague you’re not quite sure when the book is over. His email is nihilism-at-Guttersnipe-dot-com.”

There’s nothing more satisfying than making fun of writers that remind one of oneself, right? Now, guess which (if any) of these quirky writers is the villain? Oh, by the way, the murderer may be someone else entirely.
You can find The Pit and the Passion: Murder at the Ghost Hotel, here:
Wild Rose Press
Amazon
ITunes
Barnes & Noble
Google
KOBO
Walmart
Indigo
IndieBound

A little about me:
Although M. S. Spencer has lived or traveled in five continents, she spent the last thirty years in Washington, D.C. as a librarian, Congressional assistant, speechwriter, and non-profit director. She has two grown children and a perfect granddaughter. Ms. Spencer has published twelve mystery/romantic suspense novels, and currently divides her time between Florida and Maine.

hilarious. Congratulations on your new release.

Sounds like a delightful read! My guess, none of the above.

Thanks Margaret--I had so much fun writing Rancor--there are some scenes I still laugh at (one in Paris when he's arrested). And Kait--your guess is as good as mine :). Thanks to E. B. and all the Writers who kill for letting me guest post!

It must be a lot of fun researching methods of murder and mayhem. Good luck with the book!

Jennifer--it is fun to research. Actually for The Pit & the Passion I consulted my dentist for technical details on dental forensics--how to identify a skeleton with no teeth by bone loss etc. He was super excited to be the technical consultant!

I like the concept of evil writers since there really aren't any.

I so envy and admire mystery writers! It is a level of plotting I haven't achieved yet!

The Pit & the Passion sounds like a fun read - especially for writers!

Warren--these writers aren't evil, but they are quirky!
Thanks for reading, Colleen--yes, writing a mystery is hard--you want lots of red herrings and twists yet still at the end have the reader think, "Sheesh, I should have figured that out!"
Karen--both hero & heroine are writers in this story, so it's doubly fun.

Yikes! You must have been devastated when you realized you'd thrown out your manuscript. If it's any comfort, I think the same thing happened to Hemingway. Not bad company. Loved the excerpt.

You certainly have a way with naming character!

I bet the murderer is someone else. Passion Pitowski, perhaps?

Your research resulted in a good book I bet. I also wager you found out how to kill and make people laugh, a feat if I ever heard of one. Best with your new release.

This excerpt reads very well. Congrats on the new novel.