Release from Prison by KM Rockwood


One of my assorted past jobs was in a medium security state prison, where I supervised a work crew

of about ten inmates.


Working day in and day out with a small group of convicted criminals offers an interesting perspective on our law enforcement, courts, corrections and some of the people who get caught up in the system.


As long as I worked for the state, I was careful to follow the regulations surrounding interaction between staff and inmates. Not everyone is. One of my co-workers became pregnant by an inmate, and married him when he was released.


When budget cutbacks and changes in administrative practices gutted most of the programs and services available in the prison, changing the entire atmosphere, I decided to move on. Once I was no longer a state employee, I was free to keep in touch with many of the inmates, primarily by mail. For some, I was their only contact with anyone outside prison.


Having access to inside information on how things worked, from a convict’s point of view, has been a wonderful asset for my writing.


At some point, I promised one guy, Smitty, that I’d pick him up and take him to lunch when he got released from prison. And drive him to whatever program or housing he managed to find.

To tell the truth, I never thought the day would come.


Smitty’d been caught in the revolving recidivism cycle for most of his life, starting as a fifteen-year-old, and understandably a judge finally got fed up with it. He sentenced Smitty close to forty years for a whole slew of burglary, robbery and drug offenses.


He’d have parole hearings, of course, but who’d ever vote to parole him?


Prisons got more and more overcrowded. Budgets got cut. Public and political opinion on “lock ‘em up and throw away the key” thinking began to change.


Smitty got older and mellowed out. He started working as an observation aide. In that position, he took eight-hour shifts sitting outside the cell of an inmate on suicide watch, checking on him and making a notation every ten minutes. It paid a little over a dollar a shift. He was careful and conscientious.


Finally, he was granted parole on a delayed release.


He didn’t realize it at the time, but another factor probably figured into the decision. He was at a very high risk for liver cancer. If he developed it while he was incarcerated, the prison system would be responsible for providing expensive care, probably including trips to outside facilities. Each trip would take several corrections officers and a vehicle, a considerable expense. And always a security risk.


The eighteen months before his release date were supposed to prepare him for re-entry to society. Transfer to a minimum security/prerelease program. Participate in Narcotics Anonymous. Be assigned to an outside work detail, probably picking up trash along the highway. Finally get a job on work release, preferably somewhere he could save up some money and continue to work after he walked out that gate.


Something went wrong with these plans. Smitty wouldn’t tell me exactly what happened, but he ended up being charged with a disciplinary violation that resulted in an overnight transfer from the prerelease program to a maximum-security prison miles away.


Whatever the violation was, the charges didn’t stick, and there was no re-consideration of his release date. He would be released on schedule. 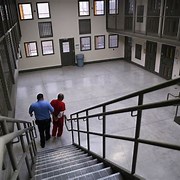 But now he was in a prison which didn’t expect and wasn’t equipped to release inmates directly. It didn’t have the cadre of social workers, drug counselors, re-entry specialists, and programs the pre-release centers had.


Since it was a long-term, maximum security facility, re-classifications were held annually. Smitty had one at the pre-release program the night they transferred him, which increased his security level to maximum. He wouldn’t get another one for a year. Well after his scheduled release date.


He would step directly from one of the most restrictive environments in the corrections system to the street. With the clothes on his back and fifty dollars gate money.


One of the few people to whom he could appeal for help was the chaplain. To give the man the credit he’s due, he set Smitty up with a religious re-entry program that would house and support him for six months as he found a job and a place to live.


To stay in the program, he’d have to attend religious services and NA meetings regularly, but the meetings would be required by the terms of his parole, anyhow. As would an ankle monitor and periodic drug tests.


When I arrived to pick him up, at the time the prison’s information officer gave me, Smitty’s release hadn’t been processed yet.


The actual release took place in an auxiliary building across the huge, wind-swept parking lot that separated it from the main prison. He was escorted, handcuffed and shackled, by two corrections officers. Until he had the paperwork signed and approved, he was a maximum-security inmate and would be treated as such.


The officers had jackets, but Smitty was shivering by the time they arrived.


I wasn’t surprised at the delay. If there’s one thing prison inmates have an abundance of, it’s time. Very seldom does anyone have a sense of urgency. I knew I’d just have to wait while he was unshackled and a clerk went through a whole pile of paperwork with him.


Sign away a number of rights. Agree to parole search and detention, which meant no warrant or even reasonable suspicion was needed. Promise to pay the not-inconsiderable costs of drug testing, the ankle monitor and all parole-related expenses. Report to the parole office within 24 hours.

Property returned. The clothes in which he’d been arrested, a pair of shorts & a T-shirt, no longer fit. He hadn’t been wearing shoes.


A few coins, no folding money. A paper clip. A worn wallet with an expired drivers license and a scrap of paper with phone numbers of people he hadn’t heard from in twenty years and probably were no longer in service, at least to anybody he knew.


Aware that he’d be released with one set of clothes, I had been visiting thrift stores for the past few months looking for what he’d need. I also got some basic, easily fixed, food supplies. I went to the car and got him the jacket I’d found.

When he was finally done, both of the officers shook his hand and wished him luck. “Don’t let us see you back here.”


Holding his emotions firmly in check, Smitty slipped on the jacket and followed me out the door.

He marveled as I unlocked the car using my key fob. He had never seen a seatbelt with a shoulder strap, and struggled with that.


As I settled into the driver’s seat, he said, “Let’s get far away from here. Fast.”


I will continue the saga of Smitty’s re-introduction to the world outside prison on my next blog.

You know how to make a story interesting. I'm eagerly awaiting the next installment.

Wow, this is both thrilling and so sad. I hope Smitty does well. I'm looking forward to the next installment.

What an amazing story. I, too, am eagerly awaiting the next installment.

Not only as I interested in the next installment, but it makes me wonder about the news stories and movies showing interaction (good and bad between guards, prison workers, etc). Would love your take on that in a blog sometime.... for now, my concern is Smitty.

Barb, the whole experience was interesting.

Kait & Susan, I will continue the story on my next blog (serial non-fiction?)

Debra, in my experience, both prison inmates & prison staff are people, and as different (and similar) as people everywhere, as are their interactions.

This is so enlightening on so many levels. Thanks for the serial--also awaiting the next installment. Hey, this is how Dickens did it. Not a bad example.

Your perspective is so unique, KM. Few people have your experience, which is why your series is so authentic. Can't wait until next week!

KM, I am holding my breath to see what happens next! What a perspective you have on the system. Glad the chaplain could find Smitty a situation and I'll be keeping my fingers crossed that Smitty can make the most of this opportunity to start over.

If only I could replicate Dickens' success, Kaye.

E.B, I try to be a voice for people who seldom are in a position to be heard by most people.

Shari, starting over is hard, especially for someone in his fifties who has spent three quarters of his life in prison. But at least he's been given a chance.

Kathleen, you are a good and caring person. People like Smitty are fortunate to have someone like you enter their lives.