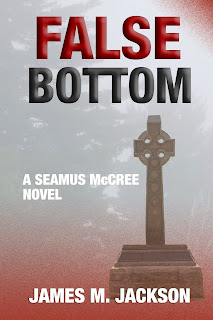 When authors consider self-publishing, they are usually attracted to being in control. They can decide on the cover, pricing, how quickly to publish. All profits accrue to them.

All the hassles also fall on the author’s back, as the past few weeks have reminded me.

The Amasa (nearest village to where I live) historical society offered me the opportunity to sell and sign books at their Memorial Day event. I donate a copy of Cabin Fever for their auction each year. Terrific timing, I thought, my next Seamus McCree novel, False Bottom, will be out by then. I agreed, and then things didn’t go as I planned.

I hope readers of my books find very few typos or formatting errors. Assuring that is the case was one reason I switched from traditional publishing to self-publishing. The problem was, I thought False Bottom had gone through its final copyedit and only needed proofing and formatting to be ready. A final read revealed issues. Fixing anything has the potential to introduce additional errors. It took a lot longer than I anticipated to polish this novel. 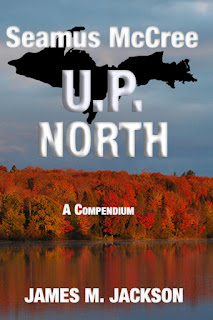 I’d put together a schedule with drop-dead dates and I was still okay. While I was fussing with False Bottom, I decided on a marketing idea directed at new northern readers. I’d produce a compendium of the two novels (Cabin Fever and Empty Promises) set in Michigan’s Upper Peninsula, plus two short stories set in the same area. I called it Seamus McCree U.P. North. That meant another cover to design, print and e-book formatting, but at least I didn’t need to proof anything other than the introduction. That would be perfect for Memorial Day. The timing was tight, but I could do it.

Before I order a bunch of print copies of a book, I’ve learned to order a proof copy. Despite thinking an electronic version is perfect, things can go awry in the printing process. Colors may not appear as expected, placement of graphics on a page might change, who knows what else. I ordered the False Bottom proof with the understanding it could take up to a week to arrive.

Good news: it showed up in three days. Bad news: When I created the cover using Photoshop, I included an extra layer that made the cover much darker than I had intended. Good thing I ordered a proof.

I had plenty of time to order a new proof, but there was a rub. If it arrived in three days, I could have it shipped to Madison; but because we were heading to our place in the U.P., we’d be gone if it took a week. And if it arrived in three days in the U.P., it would get forwarded to Madison. I had to wait three days to avoid the issue. This time, the second proof took the entire week. My drop-dead dates were fast approaching.

The proof looked great. I tried to take the book live on Kindle Direct Publishing (KDP) and got an error message to fix the highlighted issue. No issues were highlighted. Support told me the problem was that a book with the same ISBN had been previously published. I knew that was wrong. He told me to Google the ISBN. I did. False Bottom showed up on Goodreads with an expected publication date of that day. Oh, he’d write a support ticket. They’d get back to me in the next 24-72 hours.

The drop-dead window was upon me. 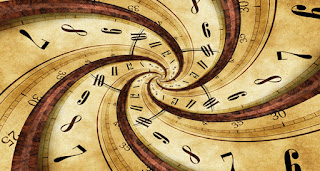 At 5:11 pm Central time, I received an email with the explanation. The Bowker listing for the ISBN had the titled spelled Fasle Bottom, which did not match my title. My transposition typo, something I am doing more frequently these days. I fixed the Bowker listing—but any change needs review, and it sat with a Pending status until the next morning.

Either I published the print version that day or I couldn’t guarantee having books in hand for the Memorial Day event. I resubmitted to KDP to publish. Good news: No errors. Bad news: It can take up to 72 hours for KDP to approve a new publication. Because the most recent changes I’d made to my files had been to electronic versions—and KDP had always approved those the same day—I neglected to add three days to the schedule.

In the meantime, I received the proof version of Seamus McCree U.P. North on the same day as the one for False Bottom arrived. It looked good. I went to publish it on KDP and got the same error. Aha, I said, I know what this is, and sure enough I checked the Bowker listing for that ISBN and discovered I had put in Seamus Mccree U.P. North (small c, not capital C). Weirder, I had done the same thing on both the print and e-book ISBNs. I’ve typed McCree so many times, I couldn't imagine I’d screwed it up twice, but the proof was before my eyes.

I submitted the changes, waited a day for “pending” to change to “approved.” The next morning, I checked. Something in Bowker’s software had changed it back to Seamus Mccree U.P. North. I called the help line; he understood the problem but couldn’t fix it. I’d have to email a specific address he gave me and describe the issue. They’d respond within 72 hours. As I write this blog, I have just passed the 24-hour mark.

KDP approved the False Bottom print version the day after I submitted it. I placed an order for books, which will arrive May 24 - May 28. Memorial Day is May 27.

On Memorial Day, I’ll have the proof copies to showcase and take orders. I’ll hand-deliver the books for locals. If they are out-of-town visitors, I’ll mail them for free.

And if there is a next book, I’ll push my drop-dead date two-weeks earlier. I don’t need this stress.

What a mess. I thought self-pub was on YOUR schedule. I guess not.

Well, it is on your schedule, if you make the right schedule!

Good tip. I was thinking of bypassing proof copy this time round but maybe I better not. Do you order from KDP and Ingram, or just Ingram or just KDP?

Judy -- I order from both because I use cream pages for Ingram and white pages for KDP, having found that 50% of my readers prefer each, and so for those who buy directly from me I give them a choice. A bit of an added complication, but I've decided it's worth it for the extra interaction I get with readers.

I hope you make a lot of sales to make up for your stress. Maybe the books will come on time. Merrily

Oh my, what an ordeal! I hope your book arrives before Memorial Day!

Oh my! A heart-pounding race with time! 😳 Jim, you can tell a story!

Oh, Jim, I'm so sorry for your woes. After each release, there are always new items I've added to my check list. The very first book I self-published had a deadline of my luau launch party, planned before my publisher closed down. I did not have time to review the proof copy so I ordered the books. They arrived two days before the launch. Fortunately they were fine except for one name spelled in different versions. (added to my list) I ordered the proof of book six when I was vacationing in Hawaii. CreateSpace did not deliver on time. They refunded me my enormous express delivery fee but that didn't help the issue. When it was finally delivered to me at home, the burgundy red of the dress on the cover turned out to be brown. Ack! It's all a learning process and after your presentation you may even chuckle over it. I know you'll sell a bundle of books. Good luck.

I'm looking forward to reading your two latest books even if you don't like the covers. I know I'll enjoy the books.

Sorry to hear about all the troubles, Jim. I publish through KDP and Ingram Spark, too. I haven't tried to do what you did - publish a compendium. When I do, I'll be extra careful. Anything automated runs the risk of the computers rejecting a tiny little error. Regarding the big picture, I'm still a self-publishing fan for several reasons, one of which is time. I'm older now, and I just don't have time to wait and wait and wait for a publisher (or more than one) to evaluate a manuscript and offer a contract...or not. I've heard too many stories about writers who waited months to be rejected, and then had to move on to another publisher(s), and then IF they are offered a contract, wait a year to see the book actually published. I've written three Letty Valdez Mysteries in the past three years. Two are available and the third will be published in August. I don't think I could have done that had I gone the traditional route. Self-publishing has a lot of challenges to be sure. But it works for me.
C.J. Shane

Thanks for the good thoughts, everyone. I have my fingers crossed for better news this week.

Lordy. I feel your pain. I had to switch to a new vendor to pub a short story collection. I'm way behind.

What a nightmare! But from what I know of you, you'll manage to get it fixed, the book out, learn from it and share the lessons with us. Which we appreciate.