Where Evil Grows by Diane Bator 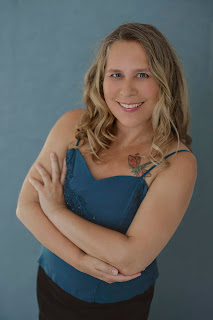 I’ve always had an active imagination, and I’ve never bothered to tuck it away as an adult. Although now I work in a haunted theatre, which will one day become the setting for a new mystery series, my first real memory of being fascinated with mysterious settings was when I was a kid and would have to use the washroom in the small grocery store we would shop in where I grew up.
In order to get to the washrooms, a side-by-side pair of cramped rooms, we had to walk down a narrow set of creaky stairs into the basement. I always hated having to walk in front of anyone. Back then, basements of old stores were not finished with drywall and a coat of cheery paint. They were dirty, musty, bug-infested, and scary!
That basement in particular had dirt or old cement floors, but sometimes we’d need to walk on pallet board walks between stacks of boxes, which also sat on pallets. Old basements were notorious for seeping walls and flooding, fair enough, but anything could have been hiding behind those boxes.
Even creepier were the bare lightbulbs that hung every few feet. Far enough apart to cast shadows. When you are four or five, those shadows are enough to make you reach for Mom or Dad’s hand.
By far, the scariest part of the whole experience was the song that looped through my head. Where Evil Grows by the Poppy Family. Yup, I started having creepy thoughts young! If you’ve never heard the lyrics, it’s worth a listen. Looking back, I believe that song/basement combination laid the foundation for a lifetime of fascination with mysterious tales.
The safest place in the entire basement was locked inside those little rooms with nothing but a toilet, a sink, and a bright light. Then again, you could never be too careful about what might crawl out of the sink or the toilet…
Eventually, I’d have to leave the safety of the bathroom. Sometimes I’d have to wait for my little brother or a parent. That’s when that song would become even louder inside my head. I was never so happy to head back up the stairs and into the brightly lit store. Yet it seems a part of my imagination brought the whole experience with me.
I have grown to love a good whodunit and suspense, both in movies and novels. It’s led to many a story that begins when I ask myself “what if?” My very first mystery, a novella written for a contest, was based on one of those old murder mystery party games. I actually found the exact same game in a second-hand shop not long after my story was published. My homage to my first mystery, which I’ve since followed with eight mystery novels.
I guess it shows, you never know where evil grows. 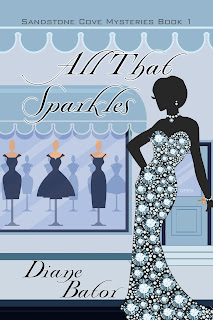 What do a trunk full of vintage clothes, a handsome land developer, and a fifty-year-old diamond heist have in common? Find out in All That Sparkles.

Diane Bator is an avid hiker who loves to make a mess in the kitchen. Joining a writing group was the catalyst for coming out of the creative closet and writing her murder mysteries:
Wild Blue Mysteries, Gilda Wright Mysteries, and Glitter Bay Mysteries.

I have my own "creepy basement" childhood memories. Congratulations on your latest release! I look forward to reading it.

Oh, my, what a perfect setting! Sounds like it would still be creepy today. Best of everything with your latest release.

That's one creepy song, and to have it turn into an "ear worm" in an already spooky basement must have been terrifying for a kid. Glad you have put it to good use.