An Interview with James M. Jackson by E. B. Davis

An interview with James M. Jackson by E. B. Davis

Seamus McCree returns to his native Boston to bury his Uncle Mike, a retired Boston police captain, who has been murdered. Seamus has been named executor of the estate, which is easy enough for him to settle. But he soon learns Uncle Mike has left a second, secret legacy - and that triggers an earthquake's worth of problems. Added to his troubles is the discovery that Uncle Mike's killer is now gunning for Seamus and his family.
Seamus must find a path through a labyrinth of lies and secrets stemming from his father's death more than forty years earlier and resolve all of Uncle Mike's legacies before the killer can strike again.
https://jamesmjackson.com/ 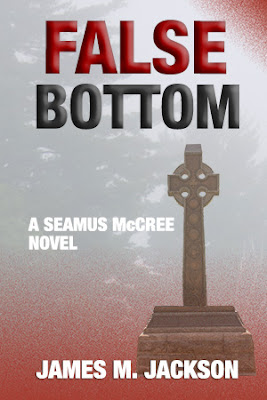 In James M. Jackson’s sixth in the Seamus McCree series, False Bottom, he starts with Seamus having a hangover from Uncle Mike’s wake for which he paid. His mother states, “Then it was stupid and a waste of your own money. You should suffer.” As unmotherly as his mother is, Trudy fascinates me. She’s cutthroat honest, and yet, she’s full of secrets, which is where, I suspect, her attributes as a mother are hidden. Which is why I will follow this series. It’s all about family, a Boston-based Irish Catholic family, whose sons have done well monetarily and who have a sense of justice. Remind you of another family, who is equally fascinating?

I think Jim has a winner of a series in unwinding the secrets of this family. Too fast moving to be a saga, it still imparts multigenerational dimensions along with the changing values of each era. Additional characters, who come out of hiding, have been and will continue to please readers, especially me.

Seamus made his career as a bank stock analyst. Why bank stocks?

I had a number of banks as clients when I was a consultant, and I figured I knew enough to cover Seamus’s backstory.

Why are cops so sentimental about their Crown Victorias’? Seems to me, the new Dodge Chargers they’re using now are better.

Uncle Mike comes from a generation of cops where Crown Vics were the ride of choice. They’re big; they’re heavy; they’re comfortable; and they reminded Mike of the “good old days.”

I’m always surprised by Seamus’s mother Trudy. Does she endorse the adage “an eye for an eye?”

Trudy is an Old Testament kind of woman. No “turn the other cheek” for her. She is all about tribe (family), and when she or her kin are threatened, she goes on the offensive.

What was the purpose of Uncle Mike’s secret fund?

[Spoiler alert] Uncle Mike and his friends used the secret fund to take care of children and surviving spouses of fallen police officers. They believed politicians didn’t do enough. 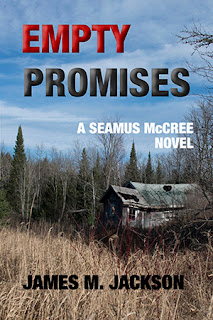 When Seamus doesn’t eat, Paddy worries. But for the Happy Reaper, fasting is a good preparation. Is the assassin much younger than Seamus or is Seamus already too skinny?

Depression affects people in different ways. Some eat to excess; Seamus shuts down and forgets to take care of himself. Paddy knows Seamus not eating is a warning sign.

Tell readers about Seamus’s older sister who was MIA for over thirty years. Why did she change her name from Fiona McCree to Ailish Jardine?

[Spoiler Alert] Fiona McCree was “Daddy’s Little Girl” and idolized the father she lost when she was 14. Seamus, three years younger, turned to gangs and eventually sports for male-bonding. Fiona chose as her crutches religion and a fanatical defense of the McCree family name. When Trudy “disrespected” her father through her actions, Fiona gave up the family name and chose her own. Ailish means “God is my oath.” She thought she picked Jardine because of a crush on Beach Boy Al Jardine. Trudy suggests her real motivation was because it comes from the same roots as Gairden, her father’s name.

Uncle Mike, who helped raise Seamus had three rules he had to follow. When he violated one, he suffered a broken nose. What are his three rules, and were they ones you had to follow?

1.     Respect your mother (his father was dead).
2.     Stand up for whatever you believe in, regardless of the personal consequences.
3.     Never drink alone.

I was brought up to respect all elders (and mostly complied). My parents were just a step away from teatotalers. Mike’s drinking rule has more to do Irish history of alcohol abuse. My parents thought beliefs were important but not all battles are worth fighting. They wanted me to make my own decisions.

Trudy knows about Uncle Mike’s secret money. Everything seems to be a secret in this family.
Why won’t she tell Seamus the truth?

Trudy has one story she believes is too painful for her to ever share. Because of that event, she built walls around her past, even going so far as to remain silent for decades. We learn from our parents. Seamus is more open than Trudy, but he’s guarded. Paddy rebels and breaks the mold, believing there should be no secrets.

Why does Seamus’s sense of morality confuse Trudy? 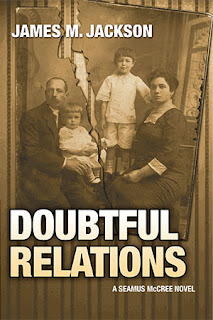 Trudy understands those for whom ends always justify the means, and she understands those who have lines they will not cross. Seamus’s sense of right and wrong is more fluid, and she isn’t quite sure what Seamus will do with the mess Uncle Mike left him.

Trudy is precise in her language and fine motor skills—so is Seamus. What did he get from his father?

Seamus gets most of his physical attributes from his father. His sense of responsibility to society came largely from his dad.

Paddy seems hyper-vigilant about Seamus’s heath. But he’s only 55. How did Paddy get to be such a mother hen?

Despite his age, Paddy is the most mature McCree, and that’s part of what causes him to worry when his father doesn’t take care of himself. I suspect every son measures himself against his father using a variety of comparisons. Physical ones are the most obvious. In the early novels Paddy tested things like speed and endurance and the father and son joked about it. Now, Paddy is reaching his physical peak and notices his father is slowing a step or two.

Paul Revere had to row before he rode? I didn’t know that. Tell us the story, please.

Revere lived in Boston. In order to alert patriots in the outlying towns of British movements, he needed to slip past British guards. He rowed to a waiting horse; his compatriot William Dawes managed to ride past soldiers on the Boston Neck. The two met in Charlestown and traveled together to Lexington. Here’s a more complete story: https://www.boston-discovery-guide.com/midnight-ride-of-paul-revere.html

Is it true? Over a certain age, guys don’t confide in their mothers?

I suppose there are exceptions to the rule.

What is a Swan boat?

They are in the Boston Public Garden. Here’s a link to provide the details: https://swanboats.com/ 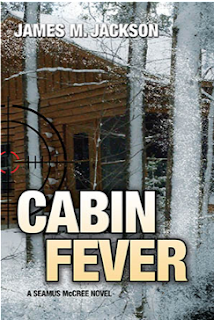 If you were resuming traditional publishing, would you whitewash the language? You used five POVs. Would you reduce that number?

Swearing is not the taboo it once was. I tell gritty stories and many of my characters curse. I won’t change them. My rule on point-of-view is to use only as many as I think I need to tell the story. Used well, it’s a technique that adds suspense because the reader often knows more than the protagonist. The spinoff series I am working on, for which I may solicit agent representation, also uses multiple POVs.

Seamus is trying to recover from his grief of losing Abigail when his “Uncle” Mike O’Malley dies. He also suffers a friend’s death and a broken ankle in this book. The title, False Bottom, sounds like the next one will sink Seamus. Is the title a foretelling?

False Bottom has several meanings in this story, running the gamut from a physical false bottom in a drawer to the mistaken belief that we can know when we’ve hit a low so bad there is no where to go but up.

Seamus may always have to struggle with depression, but without giving anything away, I’m happy to say that he is now on the road to physical and mental recovery.

You left two important elements to answer in the next book. What’s next for Seamus?

I had planned to set the next Seamus McCree novel back at his camp in Michigan’s Upper Peninsula. However, early readers wanted answers to the questions you mention, and that story needs to take place in Boston. As a compromise, I’ve started a Seamus McCree novella that will address those reader needs.

Thanks for reading False Bottom and preparing this interview, Elaine.
Posted by E. B. Davis at 12:00 AM

Elaine loved False Bottom. Why not risk a buck and enjoy several hours of reading entertainment. Here's the link.

congratulations on your latest release. I look forward to reading your series in order.

Margaret -- the first two (Ant Farm and Bad Policy) take place in your neck of the woods (Cincinnati and SE Ohio).

Having read all the books in the series, I’m a fan of your characters, plots, and settings. Your knowledge of the world of numbers and money makes your thrillers more complex, while still being easily readable. Good interview, Elaine.

Love this series. Thank you for the discount and the link for False Bottom! It will be fun to visit with Seamus in his native land.

Thanks, everyone. When I enjoy a book the interview questions flow naturally. Good luck with the book, Jim. 99 cents is a bargain--it's almost criminal--a steal.

I've enjoyed reading your series and can't wait to order your latest books. I don't read Kindle books so I'll be ordering the books I don't already have to continue the series.

I've already read False Bottom in a pre-release form, and it's well worth your while to order this, especially while it's at this sale price.

Grace -- shhh - not everyone has read all of the series before False Bottom!

As always, Elaine, a wonderful interview. I've read several of Jim's books and they never cease to be exciting with twists I didn't see coming.

Oops! Sorry, Jim. My blunder. I wish I knew how to delete a comment.