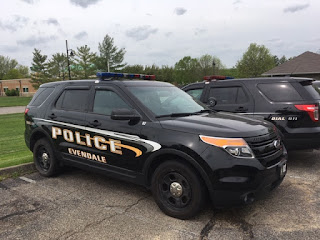 
Evacuate, help others, prevent people from entering the building, call 9-1-1. Central dispatch will radio patrol cars in the Cincinnati suburbs, which will arrive in two or three minutes.


Have a plan. You have three to five minutes to survive. If you are wounded, you need to have a survival mindset. Whitney Austin, who survived the 2018 Cincinnati Fifth Third Bank shooting with twelve bullet wounds, chanted to herself as she played dead: “I have a five and seven-year-old who need their mother.” Austin recovered and later founded the Whitney Strong Foundation to promote a reduction in gun violence.


The 1995 TransContinental Trucking shooting in Evendale still haunts the police. A shooter, angry about his reduced work hours, entered the offices and shot and killed two employees. The receptionist hid under her desk. She could have run away, but hid until the shooter found her. After he shot her, she ran, but it was too late. She was dead by the time she reached the patrol cars.


Barricade the door with tables and chairs. Turn off the lights, pull down the blinds, silence your cellphone, and hide behind a large object. Use a belt or purse strap looped over the double lever open/close mechanism on an exit door to prevent entry. A wooden or metal door will not deflect bullets, but will affect bullet trajectory.


In classrooms, teachers are equipped with a large garbage can containing a trash bag liner, a hammer, a rope, a sheet, an epi-pen, granola bars and bottles of water. A sheet can cover a window. A hammer can break a window and be used as a weapon. A rope can be used, tied to a doorknob, to prevent entry. In lengthy lockdown situations, the trash can with liner can serve as a toilet.


If you are with a group of children, help them exit through a door or window and tell them to run to a soccer goal, tree, or jungle gym. Within minutes, enough first responders will be on the scene to care for them.


If you are shot in an arm or leg, apply a tourniquet. You can last an hour without treatment. Treat chest wounds with compression. Pack the wound with gauze or strips of clothing to slow bleeding. You need transport ASAP.


Their job is to stop the shooter, not administer first aid or help you evacuate. Stay calm and quiet with your hands visible.


Readers and writers, have you had active shooter training?

It is desperately sad that we need this knowledge, but better everyone knows.

The recent Colorado STEM school shootings referenced the run-hide-fight concept. The kids followed their training. My husband's lab has the same protocol, but with few outside doors.

I agree with Jim. Especially in light of the latest school shooting, it is tragic that we, and our children, need to know these things. Thank you for sharing the information, Margaret.

What a sad commentary that in this day and age we have to be trained to survive if attacked in a public place. Thank you, Margaret, for posting these tips.

Shari and Grace, watch the video. Sargent Holloway makes his college kids watch it at the start of every semester. It's a horrible feeling to be seated in a public theatre and locate not only the nearest exits but plan a retreat in case of an active shooter.

One thing I was taught in active shooter training is to never, under any circumstances, open the door to let anyone in. This include people you know & trust. They just might be the shooter. Or someone could be using them to get a door opened.

When I was in hostage training, they gave us a list of things to do that people who had been held hostage had complied. The first one was, "Remember, even if yo are not religious, you can pray." This was followed by, "Never leave home for work with feelings of antipathy toward your loved ones." and "Make sure your life insurance is paid up."