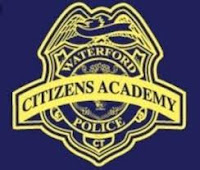 The last class in my citizens police academy wasn’t as fun as the other classes, such as the K9 demo or instruction at the gun range, but it was gripping and exemplified the range of incidents police encounter every day. Our topic: domestic violence.

The instructor took us through the evolution of domestic violence law from the “beat your wife with a stick no bigger than your thumb,” to the attitude that everything - even abuse - that happens in a family is a private matter, to the watershed case of THURMAN V. CITY OF TORRINGTON, CT, a case that made headlines and sent shockwaves throughout the country.

Tracy Thurman had endured years of physical abuse from her husband, Charles, with the police often called to their home. Finally in 1983 she got a protective order – to no avail. Ten minutes after calling police, Charles Thurman burst into her house, stabbed her thirteen times in the face, neck, and chest, kicked her in the head, and took their child. Somehow, she survived. After months in the hospital and injuries that left her with permanent nerve damage, Tracy Thurman sued the city of Torrington, claiming that because the law treated her differently from any other victim of assault, she had been denied equal protection under the law.  The stand she took led to the state's 1986 Family Violence Response and Prevention Act which made domestic violence a crime that must be prosecuted whether or not the victim chooses to press charges. Other states quickly followed suit.

Connecticut law has continued to evolve with more study into the victimology of domestic violence and more comprehensive support for victims. Domestic violence is no longer a “family issue” to keep behind closed doors and is no longer considered in the traditional context of women battered by their male spouses. Abuse happens within all kinds of households, in nontraditional relationships, among relatives, people who are dating, or friends who choose to room together. All are considered domestic relationships.

The evolution of the definition of “self-defense” led to many “dual arrest” scenarios, where officers were mandated to arrest everyone who had caused injury to another, even if it was in self-defense against a batterer. With a January 2019 change in Connecticut law, there is now a focus on the “dominant aggressor.”

Now the police response to domestic violence is swifter and more comprehensive. There is zero officer discretion; if an officer sees injuries, they “shall arrest” as Connecticut law states. The offender will go to court the next day and referrals are made to the Office of Child and Family Services.

Some quick facts: Alcohol or other intoxicants are almost always involved in domestic violence situations. Our medium size town averages one domestic call a day. Also, police hate Lifetime TV shows: too unrealistic and salacious, too many people making bad decisions, and too often police are depicted as clueless.

One term caught my attention: the “rolling domestic.” This is when a person in a relationship batters another as they drive. Hard to believe but one of my classmates had a ride-along with an officer when he responded to this kind of call.

The officer said that often when you see people walking on the side of the highway and you wonder why they’re there, it’s because they’ve had a fight, have been kicked out of the car by a spouse, fiancé, or friend, or jumped out to avoid a beating.

Police – and public attitudes – have made strides to help those in dangerous domestic situations.

My class wraps up with a graduation ceremony this week. I’ve learned so much and have renewed respect for law enforcement officers, who never know what they’ll encounter when they go out on a call.

Have you taken a citizens police academy course?

It's interesting to me how far we have come during my lifetime in terms of treating both substance abuse while driving and domestic abuse. In both cases, women have had to lead the efforts against the boys-will-be-boys attitude that kept punishment minimal.

If I ever stay in one place long enough, I'd love to participate in a citizen's police academy.

Blue Ash Ohio CPA! I wear my official black polo to the annual law enforcement open house in September. We covered domestic violence, but not in such detail.

Thanks, Shari, for posting about your training. So sad that this exists, but also that victims will stay in an abusive relationship out of fear or any other reason.

Police departments in different jurisdictions have incredibly different policies about this.

Hi Jim, If you ever stop gallivanting around, you'd love these classes.

Hi Annette, I hope to take the FBI course you've been taking. It's cool that you, Margaret, and I have been doing these classes at the same time. I've been taking notes every week!

Hi Margaret - you got a polo shirt?! We get t-shirts!

Hi Grace, this class was definitely sobering and so sad to know that the problem is so prevalent.

Hi Warren, it would be interesting to learn how other jurisdictions handle domestic violence. Since my class is in Connecticut, I only get one very small look at the law. Please share if you know about how it's handled in your part of the country.

I'd love to take a course like that (and/or go to the writer's academy for the several day course) and I will do so if I get the opportunity. There's nothing like these close-to-first-hand experiences to give us a good perspective!

KM, you are so right. These officers were so open about their experiences, but I know they were sharing only the tip of the iceberg (and what they are allowed to tell).

Shari, I would love to take a course like that, too. Right now I'm rereading all your Zoe Chambers mysteries and enjoying them just as much as I did the first time. I really liked reading the back
page telling about your life on a farm and being and EMT for an ambulance just like Zoe Chambers. No wonder I'm enjoying your main character Zoe Chambers so much. I imagine your husband is like Pete, too. I think I have all of your Zoe Chambers books, but in case I don't, please let me know which ones are your latest books in the series.