The Little Voices by Catherine Bruns

Everyone has them, especially writers. Those little voices inside your head. An idea urging you to take notice. A future character calling to get your attention. Sometimes you can't shut them up. Other times, they're painfully silent, and you beg for them to speak.

I’m guessing this happens to every writer, but I probably endured more than most. I knew from the young age of eight that I wanted to be a writer. I started out with short stories and plays. I worked as a reporter for a local newspaper. But after I graduated from college, I entered a different profession, and the little voices started talking less and less. I spent the next 20 years waiting for them to speak again and say something—anything. Procrastination took over and fear and doubt as well. Tomorrow, I told them. I'll write tomorrow. Hold that thought!

A writer needs to have a lot of patience, and that sometimes has been my downfall. I expected to get everything right the first time I put it all down on paper, and that simply doesn’t happen. If an idea or thought wasn’t working, I got frustrated and crumpled up the paper. Years later, I’d simply hit the delete button on my computer. I never put the time in to try and work with what I already had. Perhaps I should have taken Nora Roberts’ words to heart: "I can fix a bad page. I can't fix a blank page."
In the meantime, I got married, had three children and worked a full time job. I was too tired to make the effort at night. Tomorrow, I told myself over and over. Even though I'd stopped writing, my love of reading continued. Sue Grafton's Alphabet Mysteries have always been a favorite. Before Facebook existed, Sue had an online forum where she would answer questions readers posted. I told her I had writer's block and no idea how to fix it. She wrote back and told me that it wasn’t writer’s block. I was getting ideas every day, but my ego was probably shooting them down. Sue said that I was afraid to fail, and not to worry about doing something that had been done before. She assured me that everything had been done before—it was my personal spin on the idea that would make it original. She ended her response to me in a personal email, dated September 14, 2001, in classic Sue Grafton fashion: “Obey me.”

As more time passed, I thought about what Sue had said and knew she was right. Another idea came to me and the little voices started to babble again. One day, about five and a half years ago, I forced myself to sit down at the keyboard. I always wanted to write mystery and thought it would be great fun to create a story about a real estate agent accused of killing one of her co-workers, especially since I was licensed and knew the business. So, I went to work. This time, I didn’t delete the story when I came to a bump in the road. I kept at it and the process got easier the more I wrote. Who knew?

I wrote my first novel, Killer Transaction, back in 2013. A few months later I had an agent. She started querying the book for me. While that was happening, I started a second series. Tastes Like Murder was the first book in the Cookies & Chance series about a young divorced woman who runs a novelty cookie shop in the Buffalo area.

When Killer Transaction didn’t sell, my relationship with my agent came to an end. I was crushed but even more determined than ever to become a published author. I liked what I saw at Gemma Halliday Publishing, a boutique publisher of cozy mysteries. Gemma published both books in 2015. Tastes Like Murder performed better than I’d hoped. I never expected to sell thousands of ebooks in the first month of publication.
Crumbled to Pieces released this week. It’s the sixth book in the series. Since 2013, I’ve written 13 novels (all cozy).  With the help of my new agent, I’ve also landed a traditional deal.  The Italian Chef Mysteries debuts with Sourcebooks in August 2019. I’m excited to start this new chapter in my career. I’m even working on my first book that’s not a cozy! 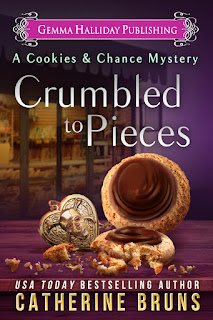 Now the little voices have taken over. They talk to me all the time—when I'm driving, in the shower, when I'm people-watching at the grocery store. They enjoy keeping me up at night. They've awakened from their twenty-year sleep in typical Rip Van Winkle fashion and I don't think they're going anywhere.
Remember, the little voices are always there. Just make sure that you’re listening for them.

USA Today best-selling author Catherine Bruns lives in Upstate New York with an all-male household that consists of her very patient husband, three sons and several spoiled pets. Catherine has a B.A. in both English and Performing Arts and is a former newspaper reporter and press release writer. In her spare time, she loves to bake, read and attend live theater performances. Readers are invited to visit her website at www.catherinebruns.net.

To celebrate the upcoming release of Crumbled to Pieces, Catherine’s publisher has put the first book in the
series, Tastes Like Murder, on sale for 99 cents. https://amzn.to/2O8zCSn
Posted by E. B. Davis at 12:00 AM

I'm always grateful that the people in my head have not learned to type.

Congratulations on your new series!

I don't think I have voices in my head, however my dreams always have people I don't know, but only know them in my dreams.

I look forward to reading your new series.

Thank you for having me here today!

Thanks for a fascinating look at your journey! It's inspiring.