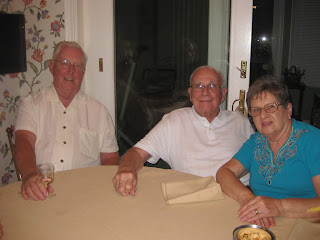 Several weeks ago our class of 1956 had our 62nd class reunion, and it was one of the best I ever attended. Because of the age of our class members, we decided to have another one next year instead of waiting two years or more because already 18 of our seventy class members have died and some others are in nursing homes.
As we did two years ago we again met in Jeannine Beagle Morris’s home where she and her husband had it two years ago. They fixed some food and others of us also brought something to eat. Jeannine had put out four albums with class pictures on a card table for us to browse through that had graduation pictures as well as pictures from prior reunions.

There were a little less than twenty people there. I lost count because some were classmates and some were spouses. When you very rarely see these people it’s hard to recognize them. Some I knew right away and others who may not have come to a class reunion for some time I wasn’t sure if it was a class member or someone’s spouse. 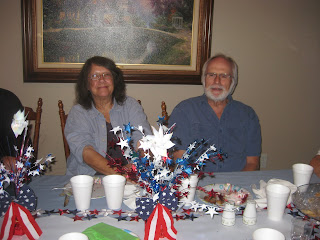 Because it was the Friday before Labor Day, Jeanne had decorated the tables a little for this holiday with red, white and blue center pieces as well as American flags. She had set up a large round table in the kitchen and a long table in was the dining room or a section of the living room which was el shaped. There were ten people sitting at that table where I sat. 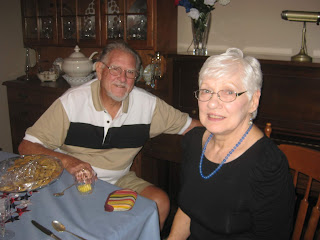 We had lively conversations getting reacquainted. After we were filled with food we took our plates out to the kitchen where Jeannine’s husband Karl rinsed them off and put them in the dish washer while the rest of us went out to sit in the longer section of the living room. She put some chairs up there in a row and three men sat on a couch there and some people sat in chairs and others lined up behind us while Jeannine took pictures and others sort of sat in other places. 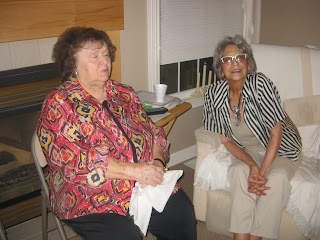 Then Jeannine had a contest where she asked questions about our class such as “What was our class color?” Only one person guessed correctly that it was pink and white, and it wasn’t me. “Class flower?” Someone guessed carnation which was right, but I didn’t remember that. She asked other questions, too, like who was the principal? Who was the school superintendent? Which teachers taught what? Etc. Everyone who got a correct answer got a small bag of candies.

The highlight of our reunion in my opinion and I think the others there, too, was when Jeannine passed out a page of Patriotic Songs for us to sing while she played them on the piano. She is a very talented pianist. Everyone sang the songs we were all familiar with like AMERICA – My country, ‘tis of thee, Sweet land of Liberty of thee I sing. Etc.  Next was AMERICA, THE BEAUTIFUL       , O beautiful for spacious skies, etc. BATTLE HYMN OF THE REPUBLIC, Mine eyes have seen the glory – etc.  GOD BLESS AMERICA, God bless America, Land that I love, etc. LET THERE BE PEACE ON EARTH, Let there be peace on earth, and let it begin with me. (This was the favorite and we sang it more than once). The last one was THIS LAND IS YOUR LAND, This land is your land, This land is my land, etc. Every song we sang had all the verses to it printed there, too. My only regret is that I didn't contact Jeannine to get the pictures she took, too.

This was the highlight of our evening. If only someone had recorded all of us singing. Ralph Hoover, a very large man, who sat on the couch close by had the most gorgeous singing voice. I’m sure there were a few who didn’t put their all into it, but they were few. After we finished with those songs someone suggested Christmas songs and that Jeannine play her organ, too. So she played a few Christmas songs before we called it a night. It was before we left that we all decided to have another class reunion next year instead of putting it off for two years and having it at Jeannine’s house again. So many of our members didn’t come because either they lived out-of-state or they never had any interest in coming. And some of them we have no idea where they live so Jeannine couldn’t contact them. Still there were some who came from out-of-state this year, too.

Do you go to your class reunions?
If you don’t, why not?
If you do, do you enjoy them?

It's great that you were able to attend your reunion and connect with so many classmates.

I've attended a few college reunions but that's it.

Margaret, I was lucky. As for college reunions, I don't remember there ever being one, but then I
went to a Kent State Trumbull county college and ended up going to the main campus my third year. The few friends I made at both campuses we connected a few times but haven't for years now.

I haven't attended any class reunions. I enjoy family reunions.

I'm so glad you had an enjoyable time at your reunion. I always enjoy my class reunions, but I find that some of the people I really want to see don't show up. So disappointing. Which reminds me, I have a copy of Libby Klein's "Class Reunions are Murder." I'll have to dig it out of my TBR pile and read it sooner than later.

Warren, I enjoy family reunions, too. Usually I have one at my house every summer for the last four or five years, but then last summer I got pneumonia and ended up in a hospital and even after I got out didn't have the strength to put one on again. This year I was too busy to have one, and my uncle on the side of the family who I have the reunions for died.

Grace, that happened this year, too. My two best high school friends who live out of state came home this past summer to see their family and didn't contact me unless they called when I was out of town. They didn't come back for the reunion because they didn't want to make that long trip again. That sounds like an interesting book, Grace. I haven't heard of it.

I recently went to my 50th reunion. May not go to any others. I have no family where we grew up and visiting the family plots will come soon enough.

It's fun seeing folks, but exhausting for those of us who would just as soon be reading a book!

Last spring we went to a 50th college reunion for my husband. We had a great time, and he reconnected with many classmates. Imagine our surprise to discover we had lived within 30 miles of one of his old friends for years, with his wife and me both teaching special education in neighboring district!


Jim, I understand that because a lot of events I go to I'd rather be reading a book. I think the singing is what really made me enjoy it.

K.M. Wow Kathleen! That had to have really pleased your husband and you, too.