A Spa to Remember By Wendy Tyson


The year was 2002 and life was particularly crazy. I was a new corporate lawyer at a large Philadelphia law firm, working twelve-hour days to prove myself. After some success with short stories, I had begun writing a novel. My husband had been promoted to a Big Job at work, and we had an energetic seven-year-old at home. Oh, and we decided we wanted another child. They say there is no “good time” to have kids. In hindsight, some times may be more opportune than others.

I was under a lot of stress.

My best friend and I decided to take a spa trip to relax and unwind. She booked a weekend at a spa in the Catskill Mountains of New York. It looked nice from the website: lots of healthy food, exercise classes, beautiful buildings, and—most importantly—spa treatments. What could go wrong?

As it turned out, nothing. But the experience was definitely one to remember. The rooms, although expensive, were spartan. The food? A large, crunchy salad bar—all vegetarian, all low calorie—unless you were on the colonic program, and then your meals were served in a glass. You weren’t allowed to bring outside food or drink to the spa, and so we ate our contraband cookies and drank our contraband wine in a darkened guest room at night like teens sneaking around behind our parents’ backs.

The spa offered sessions with a medium, encouraged attendance in the sweat lodge, and the yoga and Pilates classes were hard. While other clients twisted effortlessly into pretzels or managed minutes-long headstands, my friend and I were lucky to master Downward Dog.

Guests were scheduled for outdoor time, which meant hiking along their many wooded paths or riding the spa’s horses. No television, no movies, no pool, no hot tub, no loud noise. Did I mention this was 2002 and we were two city girls? We thought we were signing on for a luxury spa in the mountains; we’d arrived at a health spa boot camp. (We later found out it’s a popular celebrity destination.)

At the end of the day—and by the end of the trip—we’d racked up a lot of memories and a few healthy habits. Admittedly, I returned home refreshed and relaxed (and, as it turned out, pregnant with twins). The spa adventure stayed with me through the years, not only as the subject of some inside jokes but also because of the contrast between our expectations and the reality of our experience.

And because of all the great places to hide a body.

At the time, I saw myself as a contemporary fiction author. I didn’t start writing crime fiction until a few years later, but as soon as I started writing mysteries I knew the spa would fit into one of my books someday. That day came last year when I wrote Rooted In Deceit. I had such a clear vision of the spa it would become, now set in Pennsylvania’s scenic Bucks County rather than the Catskill Mountains. I, of course, took artist’s license with the venue, making it posher and bigger than it was—and way more luxurious. The general landscape, with the horses and the pastures, and the miles of hiking trails, is the same. And, of course, I added a sinister atmosphere—and a murder. 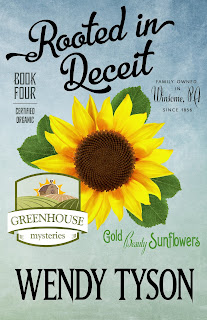 People often ask me if I borrow from real life in my novels. I do, but not in the way they expect. I’ll see an abandoned building or an eerie subway tunnel or a man walking along the highway and I’ll know that it’s something I want to include in a book. If I can, I’ll take a photo to capture the image or the feeling. I once was hiking on a trail near our home in Vermont and came across an Adirondack chair in the middle of the trail. It was facing the view of the mountains in the distance; someone’s treasured retreat. I photographed that chair because it was unexpected. One doesn’t think they’ll see a chair positioned that way on a public hiking route. The chair was later moved to a trail that overlooked Megan’s home in Bitter Harvest; an ominous opening for a mystery.

At times, it’s an experience that inspires a scene or a setting or a concept for a book—like the spa trip—but always the experience is remade into something unrecognizable from the original. I think that’s what we do as authors. We take real life, the essence of an experience or thing or person, distill it down into some fundamental form, and use it to communicate, to share in a way we can all relate to.

If you read Rooted In Deceit, imagine two women in a cell-like guest room, furtively drinking wine and eating Oreos, shades drawn, lights dim, laughing at the irony. You won’t get that image from the book but know that it inspired a novel.

A remote spa is the perfect murder setting. Especially with the spa clients crazed with hunger.

Perfect, Wendy! I always wondered what went on at those spas. Now I know. The perfect setting for a murder. Looking forward to reading ROOTED IN DECEIT.

I know you can not take a writer anywhere.

Wendy, you were on my panel Small Town Murder at Malice Domestic in 1916.

Wendy, you were on my Small Town Murder panel at Malice Domestic in 1916. I enjoyed reading your books, but as for the spa the only thing I would like is hiking down the trails.

Anything can be used as a component in our fiction! Sounds like you were able to bring the spa to life as the scene of murder!

Thank you for hosting me on Writers Who Kill! Yes...writers certainly can twist anything. Sometimes the more benign-seeming, the better!