My Walk to End Alzheimer’s

I’ll never forget the day the neurologist at the VA hospital gave us my dad’s diagnosis of Alzheimer’s Disease. To be honest, I knew enough to have made the diagnosis myself as I observed the testing. Dad flunked every one of the tasks asked of him.
Mom and I suspected Alzheimer’s but had been living solidly in denial for a couple of years. Dad’s jolly, easy-going personality had changed to insensitive. Uncooperative. Sometimes mean.

The diagnosis came years before he passed away. We lost him, though, in dribs and drabs, as he withdrew from us and from reality. But he never forgot us. He knew who we were until the end.

Alzheimer’s is one of those diseases that affects everyone a little differently, and it morphs from day to day.

Which is why I was even more deeply in denial when my mom started showing symptoms. Not the same symptoms, but something wasn’t right. Even worse, having dealt with her mother and husband’s illnesses, Mom knew. The look on her face when she started losing her words broke my heart. Her diagnosis wasn’t Alzheimer’s but a “close cousin,” vascular dementia.
She passed away almost exactly ten years after we’d lost my dad.

So, yeah, I’m passionate about the Alzheimer’s Association.

I created the character of Harry Adams, Pete’s father, to honor my dad. I’ve written and blogged in the past about how I imbued Harry with a number of Dad’s more endearing traits while leaving out or only lightly touching on the difficult stuff. I want readers to want to spend time with Harry. More rarely do I mention that I donate a portion of my royalties from the sales of Lost Legacy and now Cry Wolf to the Alzheimer’s Association. It seems awkward, maybe even disrespectful somehow to shout “buy my books” in order to raise money for my pet cause. 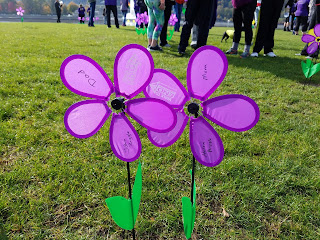 However, I’m participating in the Walk to End Alzheimer’s for the fourth year coming up next week, and I’m in full-blown money-raising mode. More than merely “buy my books,” I’m asking, begging, please consider donating. I’ve set a modest goal of $500, a goal, which as I write this, I’m very close to meeting, but I’d still love to see the total grow. Maybe $5 or even one dollar is all you can spare, and you don’t think it’s worth the effort. Honestly, every dollar helps, and if you contribute it on my fundraiser page, the dollars will add up and be much appreciated.

I also promise I won’t blog about this again…until next year’s Walk. 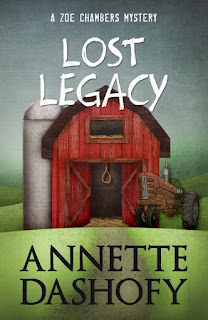 BUT if you buy Lost Legacy or Cry Wolf, you’ll also be donating indirectly. (Just had to throw that in.) 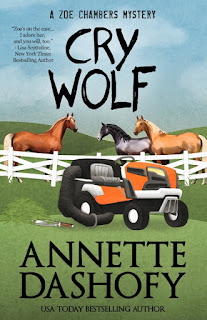 It is so sad to lose a loved one while they continue living. Jan’s mother suffered dementia for years before her death, and I know she worries she will suffer the same fate. What a wonderful thing it would be if we could find relief from these diseases. Thanks for your efforts on behalf of all of us.

Jim, I completely understand Jan's concern. Since both of my parents suffered from it and my maternal grandmother as well, I admit that I panic a little everytime I forget something or can't remember the word I want to use. I desperately want to see a cure or at least a long-term treatment that works for the disease sooner rather than later.

All of us support your goal of finding a treatment for this horrible disease!

What a lovely post, Annette, and what a sad story. Hopefully, there will be both a cure and a preventative in the near future - tomorrow wouldn't be too soon! Nor would today, for that matter.

Thank you. And amen to that, Kait.

It is painful seeing parents and friends slowly disappear from our lives. Thank you, Annette, for supporting this cause.

Annette, my father had dementia and he was well aware of it, but I don't think it was Alzehimer's. I remember him telling me several months after my son died that he knew he died, but he couldn't remember the funeral. He suffered from a stoke and gradually he passed on one night. We had all been with him that evening, but I had to go home because I needed to get some sleep because I had to teach the next day. Our mother had some heart problems because she'd had rheumatic fever when she was sixteen and had open heart surgery when she was in her early 60s and then a year after her husband died she developed more heart problems and died. Her mind was always good. I've often heard that when one of a married couple dies, the other one will die within a year. It happened with them. They are buried close to where my son is buried. I'm glad you're working to end this terrible disease.

Thank you, Grace and Gloria.

I'm sorry to hear about your folks. It doesn't seem to run in my family, but I can't imagine the terror. Bless you for fighting this terrible disease. I can't imagine a worse fate. Take care, Annette.