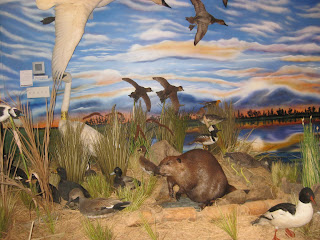 Last weekend my sisters Elaine, Suzanne and I went to the most fascinating natural history museum and education center in Beaver Creek State Park in Liverpool, Ohio.  It had large Ohio Wildlife Habitat Dioramas with one of the largest collections of mounted animals in the region. Many of the animals were displayed in their natural habitat. Each display was in front of dioramas painted as beautiful backdrops of where they would have lived.
The museum is operated entirely by unpaid volunteers and there were about a half dozen there that day and very helpful. It is funded by grants, gift shop sales and donations. It receives no federal, state or local tax dollars.

We wandered through room after room that had different animals as well as signs identifying them. We saw bears, raccoons including two albino ones. There were deer and fawns as well as beavers, ground hogs, foxes both red and gray ones, coyotes, squirrels, mountain goats, as well as all kinds of water fowl and a room with stuffed birds behind glass. 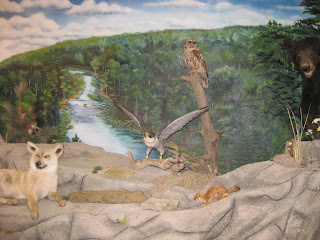 There were bobcats and even a cougar and a wolf although we don’t have them in our area. 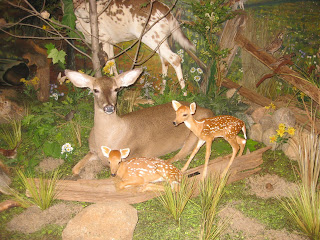 There was a hands-on room for children, too, where there were animal pelts that could be felt as well as a place that children could go into that represented a beaver lodge with branches up above it and more mounted animals.  I was surprised how soft the fur of a beaver is.

One room had a live animal display with snakes and turtles as well as a contained indoor bee hive displaying live honey bees building the honeycomb while the queen lays her eggs. At the back out of sight was an opening tube where the bees could go out to get their honey from many flower gardens all around outside the large building. A TV in another corner showed them coming out and going back in. One of the volunteers pointed out the queen bee laying an egg and after she was done her back was tan. 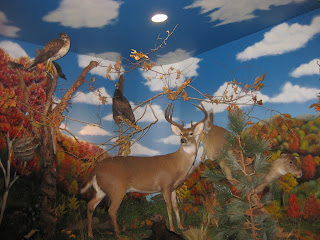 There was a room with bird eggs and another with rocks, minerals, fossils and shells, and a room of Native American Artifacts and another room with insects including butterflies.  There was a research library and a gift shop. In the gift shop I bought a cute soft bluebird that sings a beautiful song when you squeeze it. 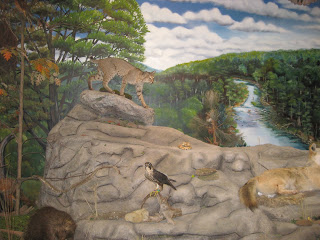 The nature museum is only open from 1:00 to 5:00 and only on Saturdays and Sundays from the first weekend of May until the first weekend of October. Outside there was a nature trail, but we didn’t take it because we were ready to go to supper elsewhere at a restaurant on our way back to my sister Elaine’s house where Suzanne and I had left our cars.

We drive south of the Beaver Creek area on I-70 when we drive to DC. I'll keep it in mind for a stop.

I've never been in a museum like that with so many ex.hibits

Warren, it was totally awesome. I hope some day you can find one like that.

That's spectacular, Gloria! I think I may have visited there in the late 1960s early 1970s when I visited with my brother in Akron. My niece was a baby at the time and my sister-in-law and I decided to take her. I'm not sure if this is the same place, but it was very similar.

Such nice displays! We have an interactive and rescue center with similar displays (and lots of animals and birds being rehabilitated, or, if they can't be released to the wild, tamed so they will interact with people.

Kait, I'm not sure if it's that old or not. I've heard there is another one somewhere north and close to Lake Erie, too. I know that a eight or ten years ago when my sisters and I went to the park to have a picnic lunch and hike the trails it wasn't there yet. Akron isn't more than 50 miles west of me. Recently I visited the Akron Zoo and enjoyed that, too.

KM, these are all animals who have died and been mounted. I imagine some could have been hit by a car or something else. Maybe even shot by a hunter. I like the idea of a rescue center that helps wild animals or birds. We have something like that near us who rescues wild injured birds and tries to heal them or at least to care for them.