Janet Evanovich's One for the Money 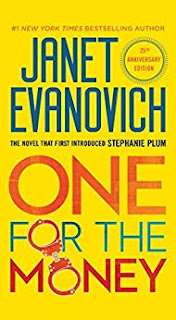 My on-line crime writers’ book club recently read and discussed Janet Evanovich’s first Stephanie Plum novel, One for the Money. (1994) I read the book in tandem with Evanovich’s subsequent publication, How I Write: Secrets of a Bestselling Author. (2006)

After publishing twelve category romance novels, and with her two children in college, Evanovich was anxious to explore what she terms the “adventure/mystery” genre: a female protagonist who works not in law enforcement, but in a related profession. “In the end, I simply wanted a heroine that I could relate to—a New Jersey-type heroine. I wanted someone who had the same familial guilt that I did.” (How I Write, pp 9-10). Evanovich takes what she likes best about writing romances—action and a hero-heroine formula--and adds a first-person point of view and her signature humor. With a plot that includes a battered woman and two murders connected to a drug-ring, Evanovich’s first book is darker than subsequent books in the series. New to her job as a bounty hunter, sassy, street-wise Stephanie Plum is deeply afraid of her stalker. I suspect Evanovich lightened up subsequent books to appeal to readers who would enjoy a less grim and more humorous character-based mystery series.


With Stephanie Plum as the protagonist, the hallmark of Evanovich’s books is her secondary cast of characters. In each book, Evanovich varies which cast members have a prominent role.


Ranger and Joe Morelli are Stephanie’s two steady guys, vice cop Morelli a childhood friend and Ranger a bounty hunter at Stephanie’s agency. Evanovich explains her definition of a “bad boy hero straight out of a Regency romance”:


“Bad boy heroes bring excitement and sexual tension to a story. Bad boy heroes can’t be completely irredeemable—they need to have something likeable about them. Actually, a bad boy hero isn’t bad at all…just different. He’s really a very strong guy whose code of conduct is based on what he instinctively knows to be right and wrong, and not necessarily what society dictates. Joe Morelli and Ranger are bad boy heroes. We can count on them to do the right thing—we’re just not sure if their methods will be entirely legal.” (How I Write, pp.20-21)


Despite her mother’s admonition to stay away from the Morelli boys, Stephanie and Joe Morelli have a history. “As a kid, Morelli’d been out of control. I’d reached the conclusion that as an adult Morelli had control in spades. The Italian temper was clear in his eyes, but the amount of violence displayed was tightly calculated. He was wearing a black rain-drenched T-shirt and jeans. When he twisted toward the towel rack I could see the gun stuck into his jeans at the small of his back.” (One for the Money, p.118)


Ex-Special Forces Ranger Manoso runs a lucrative private security service in addition to working as a bounty hunter. He’s fond of Stephanie, periodically comes to her rescue, and keeps her supplied with cars of an untraceable origin. “His straight black hair was slicked back in a ponytail. His biceps looked like they’d been carved out of granite and buffed up with Armor All. He was around 5’10” with a muscular neck and a don’t- mess-with-me body. I placed him in his late twenties.” (One for the Money, p.33)


Grandma Mazur is a combination Evanovich’s aunt and grandmother, an energetic senior full of curiosity and a regular attendee at local funeral homes visitations. “I gotta get me a pair of those,” she said, eyeballing my shorts. “I’ve still got pretty good legs, you know.” She raised her skirt and looked down at her knees…Grandma Mazur had knees like doorknobs. She’d been a beauty in her time, but the years had turned her slack-skinned and spindle-boned. Still, if she wanted to wear biker shorts, I thought she should go for it. The way I saw it, that was one of the many advantages to living in New Jersey—even old ladies were allowed to look outlandish.” (One for the Money, p. 8-9)


Lula is Stephanie’s sidekick, a hooker who leaves the street after the first book to become a file clerk at the bail bond agency and Stephanie’s frequent driver and fellow bounty hunter.


“Two hookers stood at the corner, looking like they were waiting for a bus, except buses didn’t run down Stark Street. The women were standing there, obviously bored and disgusted, I suppose because nobody was buying at this time of day. They wore cheap plastic flip-flops, stretchy tanks tops, and tight-fitting knit shorts. Their hair had been chopped short and cleverly straightened to boar-bristle quality. I wasn’t sure exactly how prostitutes determined price, but if men bought hookers by the pound, these two would be doing okay. (One for the Money, pp. 139-40).


Evanovich places her characters in a straightforward linear narrative. As the series progresses, Stephanie grows more experienced as a bounty hunter, but it’s clear she’ll never settle down in the Burg, marry, and raise a family. I admire Evanovich’s pacing and how she seamlessly includes humor.


“No one had been paying attention to Grandma Mazur. She was still playing with the gun, aiming and sighting, getting used to the heft of it. I realized there was a box of ammo….A scary thought skittered into my mind. ‘Grandma, you didn’t load the gun, did you?’


‘Well of course I loaded the gun,’ she said. ‘And I left the one hole empty like I saw on television. That way you can’t shoot nothing by mistake.’ She cocked the gun to demonstrate the safety of her action. There was a loud bang, a flash erupted from the gun barrel, and the chicken carcass jumped on its plate….


‘Dang,’ Grandma said, ‘guess I left the wrong hole empty. She leaned forward to examine her handiwork. ‘Not bad for my first time with a gun. I shot that sucker right in the gumpy.’” (One for the Money, pp.70-1)


Readers and writers, have you read any of Evanovich’s twenty-eight Stephanie Plum books? And if so, are you a Ranger or a Morelli fan? 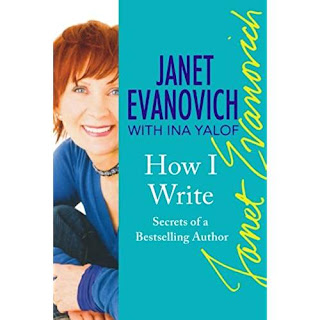 A friend from my New Jersey days introduced me to the Stephanie Plum novels. By the time I read the tenth, I had become bored with what I took to be essentially the same story. I haven't read anything since (although millions of others have!)

How I love this series! I wish Grandma Mazur would have her own spin off.

I'm sort of with Jim on this. It's been years since I read about four or five of her books and
felt it was the same story with very little changes. I liked Morelli best.

I like Janet Evanovich's mysteries. I don't think they are books to "binge" on--I feel that way about a lot of series--because the similarities do become too familiar. However, if I read one every once in a while, they seem fresher and I enjoy them more. I do like the Jersy setting.

Jim, Evanovich's novels are a known commodity: humorous, with a quick-paced plot.

Gloria, a reader knows what's she getting in one of Evanovich's books.

Kathleen, I agree the Jersey setting is carefully drawn and very compelling. I grew up in Jersey, and Evanovich gets it right.

How's her how-to book, "How I Write?" Did you glean any useful tidbits from it?

Ellen, while Evanovich's querying information is out of date, how she transitioned from romance to crime fiction is not. In One for the Money, she describes Morelli and Ranger as a romance writer would. I enjoyed learning that she considers them both, in romance terms, as "bad boys."

lol. I'm a total Joe Morelli fan. I've often wondered if he was named after the "Joe Morelli" in The Thin Man movie. I've been to several of Janet's booksignings and she is very entertaining--think "freakin" instead of another word.

Vicki, I would love to see "Jersey Girl" live.