I have always been fascinated with writerly spaces. Mine is my office, which is filled with things that inspire me to be creative: a comfy loveseat with a view of dogwoods and azaleas, shelves lined with my most cherished books, bowls of crystals and stones to run my fingers through. When I enter this room and sit down, my brain recognizes the cue and shifts into appropriate gear. 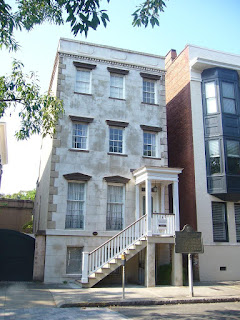 I have toured Ernest Hemingway’s Key West home, where I laid eyes upon his desk and petted his six-toed cats. I have knelt in wet grass and smelled the daffodils that inspired William Wordsworth. And last month, I stood by the window where the young Flannery O’Connor first gazed at Savannah and began to write about the South that she saw through that wavy glass.

The Flannery O’Connor Childhood Home sits on Lafayette Square, one of Savannah’s twenty-four downtown mini-parks arranged in a neat grid pattern. It is grassy and shaded with live oaks, the murmur of traffic mingling with the burble of a fountain. Much about it has changed since Flannery lived there in the early decades of the twentieth century, but one thing has remained the same: it provides a stunning view of the Cathedral of St. John the Baptist, the Mother Church of the Roman Catholic Diocese of Savannah. 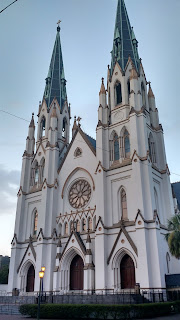 Flannery attended mass at that cathedral every single morning, along with her mother. It was one of the first things she ever saw as a baby, its spires dominating the landscape just outside the window next to her bassinet. In a similar fashion, her Catholicism would loom large in her writings, though not always as obviously or picturesquely. As Flannery herself explained, “I think it is safe to say that while the South is hardly Christ-centered, it is most certainly Christ-haunted.”

The rest of the home was equally revealing, richly restored with help from the Savannah College of Art and Design, whose students researched and replicated the décor as closely as possible, from the colors of the paint to the gilded gold trim that runs along the top of the walls, an opulent touch in an otherwise modest dwelling.

We saw the bathroom where young Flannery would hold “reading salons” with her friends, arranging pillows in the bathtub and decorating the toilet with fresh flowers (she would get in trouble many times for flushing those flowers, and also for featuring Grimm’s Fairy Tales in her readings—the violence and bloodshed in those stories delighted the precocious Flannery but terrified her more sheltered playmates). We saw the yard where she taught her chicken to walk backwards, which so startled her aunt that she called in a film crew (you can watch that video of Flannery and her amazing chickens, for even though the fowl refused to perform its trick for the camera, the director managed to fix the problem just fine, as you can see for yourself here).

We also saw her library, which is filled with Flannery’s books. Some of them contain what amounts to one-star reviews written in her elementary school handwriting. She was a harsh critic—“I didn’t like this book very much,” reads one summation—but she obviously loved the concept of books as much as she loved language and words and stories. Her devotion shows everywhere you look.

I look now at my own writing space with fresh eyes. Though I do not think my childhood home will be immortalized, I do think I can learn a great deal about my writerly self by pondering the view from my bedroom window. Scuppernong vines planted by my father stretch along the edge of dense woods, a liminal zone where wildness meets civilization. It looks safe out there, but the lush grass grows tall in the spring and hides rattlesnakes and cottonmouths. The train no longer runs behind those trees, so I no longer hear that lonesome call in the night.

Except that I do, no matter where I live and write. Just like I imagine Flannery always saw those elegant French Gothic spires, even on her farm, even on her sick bed, even with her eyes shut.

Tina Whittle writes the Tai Randolph mysteries for Poisoned Pen Press. The sixth book in this Atlanta-based series—Necessary Ends—is available now. Tina is a proud member of Sisters in Crime and serves as both a chapter officer and national board member. Visit her website to follow her on social media, sign up for her newsletter, or read additional scenes and short stories: www.tinawhittle.com.

I long to have a lovely writing space. Alas, mine is a small cluttered mess, but I can dream of sights like these.

Great visit to Flannery's Savannah home. Will you do a sequel on the peacock farm?

Interesting post, Tina. I’m still trying to get over the shocking ending of Flannery O’Connor’ “A Good Man is Hard to Find. “ LOL. It would be interesting to see her home and where she wrote.

Combining two of my favorite vacation adventures--visits to historic places, especially houses, and exploring the backgrounds of writers I admire!

Wonderful post! I love looking at writer's workspaces. It's fascinating to see where their creativity came to roost.

I am VERY excited to get to Andalusia, which may be open now after a multi-year remodel. The ending to "A Good Man" haunts me too, but seeing Flannery's first workspaces, I understand that she saw grace everywhere. Even in chickens and murderers.

Maybe someday I'll have a writing space - when the kids leave. For now, I'll have to crab space where I can get it.

I visited Ngaio's home in New Zealand and sat in her writing chair.

What a wonderful post, Tina, haunting, just like O'Connor's work. Flannery is one of my favorites, or maybe I should say, writers I greatly admire. Who can forget those stories!

I've been to Emily Dickinson's home, Henry David Thoreau's home as well as Emerson's home and Louisa May Alcott's home. I was also at Abraham Lincoln's home in Illinois. I'm sure there were others that I forgot, too.

I've visited the house and sold books on Lafayette square during the annual Flannery O'Connor celebration. And I drive by the cathedral every Sunday during the winter months on my way to the Unitarian Universalist church one square over. No doubt that the places we live imprint themselves on us for better or worse.