Then I made coffee. I even whispered to Mr. Coffee,
“Two shootings in one day. It’s a good thing Mother is in Palm Springs.”
He offered me a sympathetic gurgle.
Julie Mulhern, Shadow Dancing, Kindle Loc. 4175

Visiting a psychic is outside the norm for Ellison Russell. Finding bodies is not. Unfortunately, the psychic’s crystal ball says Ellison will soon be surrounded by death. Again.

Now there’s a corpse in the front drive, a witchy neighbor ready to turn Ellison and her (not so) little dog into toadstools, and a stripper named Starry Knight occupying the guest room.

Ellison must handle Mother (who’s found a body of her own), make up with a certain handsome detective, and catch a killer, or the death surrounding her might be her own.
www.juliemulhernauthor.com/books.html

I’ve always hated when children called their parents “Mother” and “Father.” They are roles not names. It’s like calling your dog, “Dog.” Ellison Russell, Julie Mulhern’s main character, calls her mother, “Mother,” but she calls her father, “Daddy.” I don’t have to tell you how Ellison’s relationship with her mother and father differ. A word says it all. But even if forty-year-old Ellison calls her father, “Daddy,” she doesn’t want or need a paternalistic man, somewhat unique for many women in the 1970s, the era of The Country Club Murder series. She’s a grown up. What she calls her father is more sentiment than deference.

In Shadow Dancing, Ellison became my hero. She’s taken it upon herself to help a runaway and, in the process, saves Anarchy’s life. She’s been a strong character since book one, The Deep End, but even though she’s too old to be a flower child, she is ahead of her time, which can be trying when the rest of the world expects the status quo. She has a little problem, though. She talks to her coffee maker, with whom she’s a bit too infatuated. But if her dependence on Mr. Coffee is one of her detriments, at least she can make coffee even if she doesn’t cook or bake. 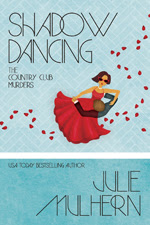 Do you think parental imperiousness is a function of personality or the era?

Frances Walford is a force in the community, in her social circle, and in her daughters’ lives. Part of that forcefulness is pure Frances and part of it comes from the era in which she was raised.

What is an ambiance committee?

An ambiance committee decides the décor for an event. That has not changed since the 70s.

In the seventies, Blue Nun wine was popular. What kind of wine was it? (Chablis? Where did Chablis go?)

Blue Nun was Liebraumilch. I actually had a bottle ordered in (my local wine store doesn’t carry it as a matter of course—imagine that). So, so sweet.

Why did desegregation cause a massive flight from Missouri to Kansas?

In the 1970s, Kansas City, Missouri was a more diverse city than the smaller Kansas cities.

With the advent of desegregation in Kansas City, Missouri, many families moved to Kansas where the majority of the citizens were white and the schools were homogenous.

How were Shawnee Mission schools top ranked? The reality must defy the description.

The Shawnee Mission school district is where many Missourians who moved to Kansas sent their children. They had dedicated teachers, engaged parents, and were top-notch in academics. Don’t let the name “Shawnee Mission” fool you, the schools were great.

When Jinx went into rehab and gave up drugs and alcohol, she takes up smoking, which none of her friends complain about. Do you think her friends would be as accepting today? Do you think no tolerance is the best policy?

I asked one of my dear friends, who still smokes, about this and she promises me smokers have become pariahs. In the 70s, smoking was accepted.

Whether 1975 or 2018, kids run away from home with the same result—prostitution and drug addiction. Do we have better policies in place to save these children today than in 1975?

I wish the answer was yes, but the reality is that very little has changed. Children are advertised on on-line forums, children are groomed for exploitation, and predators are real.

How did Aggie go from being a P.I. to being Ellison’s housekeeper?

Aggie’s beloved husband, who held the P.I. license, died after a long bout with cancer. When Al passed, Aggie did not have a license and she needed a change.

What is a ruana?

A ruana is essentially a large, square poncho with a slit down the front.

During the 1970s, many cities had urban blight. When did revitalization of the inner cities start? Big money was involved, right? 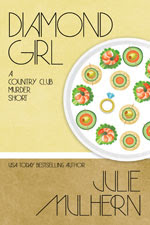 In the early 1970s, things were hopping in Kansas City. We had a new airport, we’d won a Super Bowl (and would surely do it again soon), we had an expansion baseball team, and Kemper Arena was built and was the host for hockey, NBA basketball, and the Republican National Convention. Kansas City also built a convention hotel which involved tearing down some seedy business downtown. And yes, big money was involved.

If secrecy was such an issue for Bruce, why did he pick Ellison’s car in which to have carnal relations with another woman?

Ellison’s car was parked far from the clubhouse, it wasn’t locked, and Bruce didn’t want to have carnal relations in his own car.

After catching the two in the back of her car, one her parents had given her, one she isn’t wild about anyway—is the car a goner?

Absolutely! Just as soon as she can get around to it.

Although Max, Ellison’s snack and nap-loving Weimaraner, can be a traitor, he really defends and protects not only Grace, Ellison’s teenage daughter, and Ellison, but also the witch next door, Margaret Hamilton (no relation to WWK’s Margaret S. Hamilton), after romping through her house in pursuit of a squirrel and breaking household items. I was surprised that the witch was so forgiving. What changed her mind?

How to answer this without revealing a twist or two? Let’s just say Max redeems himself when the chips are down.

Although Ellison didn’t label the men’s bad behavior when she accepted a blind date from Libba, she knew it was sexist. How were women objectified during this era?

There’s a laundry list. Women were paid less (a lot less). Sexual harassment was rampant. Married women who worked were earning a second-income which was often regarded as supplemental rather than essential. The slogan, “You’ve come a long way, baby” was widely recognized (cigarettes again)—if the woman smoking a Virginia Slim had come such a long way, why was the manufacturer still calling her baby? Don’t get me started…

Libba has lousy taste in men. What is she looking for in a man? How can she be Ellison’s best friend? 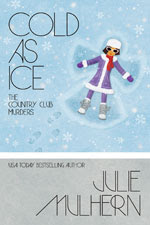 Libba does have lousy taste in men. She wants someone who is exciting but dependable. Someone who won’t hold her down but won’t wander. Someone who wants stability but not marriage. That’s a hard man to find.

As for being Ellison’s best friend, having bad taste in men has nothing to do with being a good friend. And, when it comes to friendship, Libba is exciting but dependable.

Ellison is unusual for her time. She’s glad Anarchy helped her solve a problem, but she doesn’t want him solving her problems. Why?

Ellison would rather have a partner than a white knight. The disparity in power between a damsel in distress and white knight troubles her. Also, when it comes to knights, all that armor gets in the way of building something real and lasting.

It must be wonderful to make money by doing something that is a heathy and creative outlet. How does painting restore Ellison?

Each of your books has the same title as a song of the era. How do you choose them?

Finding the right song title is one of my great joys. I was over-the-moon thrilled when I discovered Watching the Detectives was released in 1977. As for Shadow Dancing, what better title for a book with a stripper as an important character?

What’s next for Ellison?

Back Stabbers (an O’Jays title) will be out in October. When Ellison’s stockbroker is murdered (of course she finds the body) she discovers what sexual harassment in the workplace looks like.

As women’s rights have improved, do you think children are better or worse off than in the 1970s?

Growing up in 70s, I enjoyed an idyllic childhood. It was an era of free-range parenting. I roamed the neighborhood with my friends, unfettered by cellphones or the lure of video games.

Most of my friends’ mothers were stay-at-home moms. They mothered with Neosporin, Band-Aids, bologna sandwiches, and homemade popsicles.

Those women were our safety nets.

That was then. This is now. Changes in children’s lives have much more to do with new technologies, social media, video games, and a push to succeed at the expense of playground time than they do with their mothers’ rights. 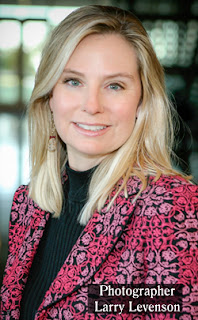 Thanks so much for hosting me today!

Congratulations on your new release! I look forward to reading it.

Congratulations, Julie, on your new release. It sounds intriguing.

You described Kansas City to a T. Good job.

One of my all time favorite series Can’t wait to read Shadow Dancers. All the best with the new release!

Julie, I can tell I'll like your books so I wrote down the titles to all three of them to order.

Sounds like a fascinating series. Thanks for sharing with us!