Why Cops hate Police shows on Television by Warren Bull 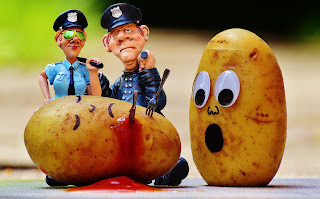 Why Cops hate Police shows on Television  by Warren Bull

There are many things television cops do that are so far from reality that the shows should be called science fiction.  For example:

Unfortunately even officers pure in heart armed only with pistols wouldn’t stand much of a chance against automatic weapons. Cops wouldn’t leave safety to rush toward the firing. They wouldn’t take on the shooters alone. And evildoers are not necessarily abysmal shots like they are in police shows. In the North Hollywood shootout in 1997 two heavily armed bank robbers wearing homemade body armor fired about 1,100 rounds while pretty much the entire police department fired about 620 rounds. The armor protected the robbers against handguns and a 12-gauge shotgun.   The thieves wounded twelve officers, eight civilians and caused immense property damage before a SWAT team put them out of action.

A detective at a shoot scene wouldn’t say, “I smell cordite.” Invented in 1889, cordite, a type of gunpowder, was replaced by better propellants. It hasn’t been used since World War II and it’s not even manufactured any more.

An officer wouldn’t tell a suspect, “Don’t leave town.” A cop can arrest someone or let the person go. Unless the officer takes that person into custody, the suspect can go wherever he or she wants.

Investigating officers in the lab

With the popularity of the shows, members of the television audience serving on juries expect the technical razzle-dazzle and gee-whiz gadgets that don’t exist. Forensic experts now get called to testify to explain why no fingerprints were taken when none were found and why there was no DNA analysis completed in crime scenes lacking genetic residue.

Police shows never deal with the real bane of a cop’s existence — paperwork.

I'm reading a book right now that has the old "don't leave town" ploy in it. I think the author thinks that even though it isn't legal, it would be something the police would say just to intimidate or convince the suspect that they did have that authority. I don't by it and it is a detriment of the book. Wish it had been left out.

The "don't leave town" comment is one of my pet peeves. Ugh. Just...stop using it. Please.

And nobody wants to read or watch about the paperwork. I love the tiny scenes in "Lewis" where you see Hathaway going through mounds of paper ("I was going to feel sorry for the poor sod who has to go through all this, then I remembered it was me.") or watching hours of video footage where nothing happens. ("I'm watching the next in the collected works called 'Watching Paint Dry.' Guess what it's about?"

Our local SINC chapter recently had a retired policeman-turned writer speak. He pointed out a number of things seen on TV shows about police procedures that he said are not correct. One that I particularly remember is police don't take time to cock their pistols before they take aim at someone. It is already cocked. That may not be the exact terminology, but you get the gist of it.

Also, cops on TV who shoot someone never get assigned to desk duty until they're cleared.

I've been binge-watching DVDs of a police TV program. It's getting annoying, though, because one of the main characters seems to kill a couple of suspects in every episode. Eventually, that city will need to start importing their dangerous criminals!

I haven't watched a police show in years. Actually, I watch very little TV. Great blog, Warren. I'll keep this in mind when I'm writing my series. By the way, my police chief and his officers never said "Don't leave town."

TV shows (and movies) are scripted scenarios with a time limit and a previously determined outcome. I bet a lot of real police officers would love to know ahead of time what was going to happen, and when!

The same is true of lawyers who work in prosecution or legal defense. To them, these TV shows are irritating because they live the real thing.

Good stuff, Warren. I watch police shows and enjoy them for what they are -- entertainment, not examples of police work in the real world. As we say in the world of fiction writing, you have to suspend your disbelief. I also watch a lot of true crime documentaries (48 Hours, Dateline, and many others) which are closer to reality. That's where I see real cops solving real crimes.


Good stuff, Warren. I watch police shows and enjoy them for what they are -- entertainment, not examples of police work in the real world. As we say in the world of fiction writing, you have to suspend your disbelief. I also watch a lot of true crime documentaries (48 Hours, Dateline, and many others) which are closer to reality. That's where I see real cops solving real crimes.