An Interview with Author Abby L. Vandiver by E. B. Davis 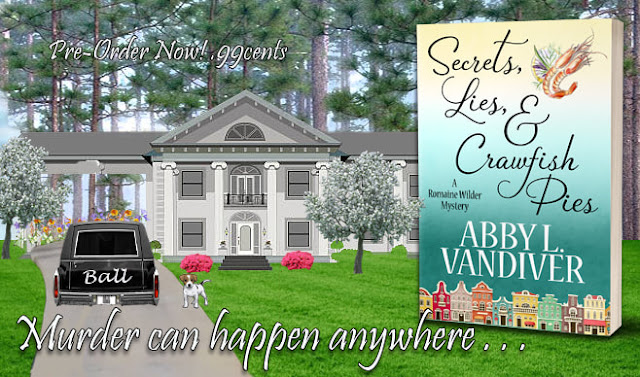 Now I was starting to feel bad. Giving my auntie such a hard time. I probably
could have been more supportive of her breaking the law and snooping around.
Wait…that didn’t sound right.
Abby L. Vandiver, Secrets, Lies & Crawfish Pies, Kindle Loc. 1830

Romaine Wilder, big-city medical examiner with a small-town past, has been downsized and evicted. With few other options, she’s forced to return to her hometown of Roble in East Texas, leaving behind the man she’s dating and the life she’s worked hard to build.

Suzanne Babet Derbinay, Romaine’s Auntie Zanne and proprietor of the Ball Funeral Home, has long since traded her French Creole upbringing for Big Texas attitude. She’s a member in a number of ladies’ auxiliaries and clubs, including being in charge of the Tri-County Annual Crawfish Boil and Music Festival.

Hanging on to the magic of her Louisiana roots, she’s cooked up a love potion or two—if she could only get Romaine to drink it. But her plans are derailed when the Ball Funeral Home, bursting at the seams with dead bodies, has a squatter stiff.

Dead Guy is a problem.

Auntie Zanne can’t abide by a murderer using her funeral home as the dumping grounds for their crimes, and Romaine doesn’t want her newly elected cousin, Sheriff Pogue Folsom, to fail on his first murder case. Together, Romaine and Auntie Zanne set off to solve it.

With a dash of humor, a dollop of Southern charm, and a peek at current social issues in the mix, it’s a fun romp around East Texas to solve a murder mystery of the cozy kind.
Amazon.com

Henery Press released Abby L. Vandiver’s first book in the Romaine Wilder Mystery series, Secrets, Lies, & Crawfish Pies on June 12. But this release isn’t Abby’s debut. She has self-published three other series, one of which is written with a friend and is paranormal. (It’s on Kindle Unlimited—I just downloaded it!)

The characters are what make Secrets, Lies, & Crawfish Pies special. Raised by her powerhouse of an aunt, Romaine Wilder is caught in her small hometown until she can find another Medical Examiner job in Chicago, where she’d rather be. Aunt Zanne keeps Romaine busy delegating tasks that entail everything from making Crawfish pie to solving the murder. She gets things done all the while denying reality or adding one plus one and getting five, driving Romaine crazy.

Roble, Texas is a real town, but you’ve changed it some, haven’t you? My little town in Secrets, Lies & Crawfish Pies is called “Roble.” It is made up and means “oak” in Spanish.

Auntie Zanne’s real name is Suzanne Arelia Sophie Babet St. Romain. Does everyone in that region have long names? lol. I don’t know. I did that because my characters were christened in the Holy Roman Church. I hope that won’t get me in trouble, but I thought it would be apropos.

Although your story is light-hearted, part of the family’s story is based on racism. Due to the horrible story of Naomi Drake, the New Orleans City Registrar for the Bureau of Vital Statistics, who wasn’t alone in her race categorization as the State of Virginia had its own eugenics-based racists, was there a mass exodus from Louisiana to Texas in the late 40s? Yes, there was. Mixed-race French Creoles, as I explain in my book, didn’t like being categorized according to other people’s mandates. Many moved to the Golden Triangle – Orange, Port Arthur, and Beaumont Texas, and some even as far as Houston. They were able to resume their community and way of life there.

Auntie Zanne runs a funeral home, serves as president of the National Funeral Directors Association (NFDA), is a member of the Tri-County Chamber of Commerce, heading up the 25th Annual Sabine County Crawfish Boil and Music Festival, and a Red Hat Society lady, among her other activities. How does an eighty-year-old have the energy? I think it’s because of her brews! She’s a Voodoo herbalist, don’t forget. I was inspired to write about it when I read about a 95-year-old park ranger and discovered many of our older citizens are still vibrant and active members of our society. I did, however, make the character of Aunt Julep, who is close to Auntie Zanne’s age, a little slower.

Rhett Remmiere seems a bit mysterious. Auntie Zanne says she grooming him to take over the funeral home along with her friend, Josephine Gail Cox. Doesn’t he have to be licensed? Who is he really, an FBI agent? Rhett Remmiere really is an FBI agent. We’ll learn his story in Book III, Potions, Tells and Deadly Spells. Right now, however, Rhett isn’t taking on any actual mortician duties, he’s just an employee. But that is a good idea. She does need another mortician in training!

Did Romaine become a Medical Examiner due to her family’s owning a funeral home? Was she used to dead bodies already? Romaine admits that her legacy is death. She’d been around the funeral home most of her life. So, yes, I think that her upbringing, once she decided to be a doctor, was very instrumental in choosing her specialty.

What’s the difference between a coroner and a ME? Many people use the terms interchangeably. However, by definition, a medical examiner is a licensed medical doctor who is trained as a forensic pathologist. A coroner does not have to be a doctor. 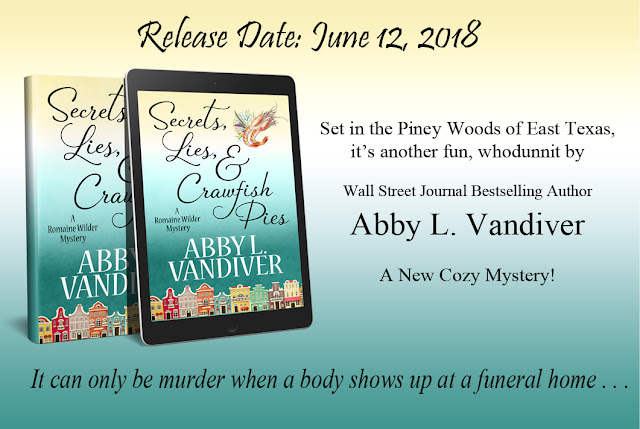 With all the potions Auntie Zanne makes, her being a voodoo herbalist, can’t she concoct something to help her friend Josephine Gail Cox’s depression? There are many medical and holistic means of treating depression; however, there is no cure. Auntie Zanne does give Josephine Gail some of her brew. But in the end, being accused of murder, as Josephine Gail had been, can make anyone get into a rut.

Do they still administer electro shock therapy? Yes, they do. My mother had it in the sixties. I wasn’t sure because it seems so barbaric, but I spoke to a psychologist and she assured me that it is still a mode of therapy used for certain mental illnesses.

Auntie Zanne forms a negative opinion of Pogue based on his awkward adolescent years. Is her opinion based on her rivalry with Romaine’s other aunt, Aunt Julep? No, Auntie Zanne loves Romaine’s Aunt Julep. They’ve been friends for decades. Auntie Zanne’s impression stems from her desire to protect Josephine Gail.

What do they now use to embalm bodies? Not formaldehyde? They use embalming fluid, as they always have. Now however, there is a formaldehyde free option. It is safer for the environment.

Why does Romaine feel that in Roble she loses her identity? Does she associate it with being young or is Auntie Zanne too overpowering? Romaine doesn’t want to be a small town girl. She likes things that small, rural towns, such as Roble, can’t offer. Because of that, she forged out a life that included culture and a life conducive to a place like Chicago.

Catfish, who is sweet on Romaine, brings her three tubs of crawfish (filled ¾ with water) because, much to Romaine’s surprise, Auntie Zanne has promised that Romaine will make Crawfish Pies for the festival. Does that mean Romaine will have to cook and shell all those crawfish? How long will the crawfish stay fresh?  Romaine will use mostly the tail meat for her dishes, so she will have to shell them all. In the book, however, Rhett and Auntie Zanne give her a hand. Crawfish are freshwater crustaceans and can live in a tub filed with water for about five days. Romaine didn’t wait more than two days to use them.

Why is Death Romaine’s legacy? She was raised in a funeral home. And as she states in the book, her name, Romaine Gabriela Sadie Heloise Wilder, were the names of her dead relatives. She quips that translated her name is: “Dead Family Name – Dead Aunt – Dead Grandma – Dead Grandma – Wilder.”

When Romaine fixes her childhood room to suit her adult tastes—does that mean she’s staying in Roble? No! Far from it. She only updates her room so she can stay there until she can find a job back in Chicago. She definitely has no plans to stay. Her Auntie Zanne on the other hand . . .

What’s next for Romaine and Auntie Zanne? A wedding and the 100th Boule of the Distinguished Ladies’ Society of Voodoo Herbalist. And, of course, murder! 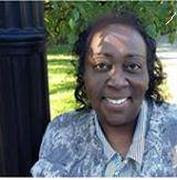 Delightful! What a rich topic. Definitely on my must read. Belated happy book birthday wishes.

Welcome, Abby! I love the premise of this book. I have it on my Nook and can't wait to read it!

Thanks for a wonderful interview! The book sounds fascinating, and best of luck with it (although I know very well it's mainly hard work & perseverance, with a bit of luck thrown in.)

Looking forward to reading your book!

It is so much fun to read a mystery and learn something about a culture too. Your book sounds fascinating.

This looks like a great book! Years ago, in my small hometown, a doctor ran for coroner, but didn't win because people said, "he already has a job!" and elected a HS graduate instead.

Abby, this sounds like a series I would really enjoy. I've got it on my to be ordered list now.

Ah, being from south Louisiana, I love the title and the premise of your book. Ordering a copy now. Can't wait to read it!