The Western Star by Craig Johnson: A Review by Warren Bull

The Western Star by Craig Johnson: A Review by Warren Bull 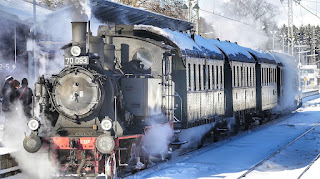 I had the pleasure of meeting Craig Johnson and his wife at a writing conference some years ago. He
was friendly, approachable and he told me how to set a cowboy hat on a flat surface.

In addition to his novels, Craig Johnson’s Longmire is on a television series on Netflix.

So I am delighted to be able to give my highest recommendation to The Western Star. The story
presents Walt Longmire as a young man recently returned from Viet Nam and as the veteran
Wyoming Sheriff in two parallel plot lines, either one of which could easily sustain a novel.

The characters are memorable. The dialog is witty.  And as usual the landscape of Wyoming is one of
a character all by itself. Guff, but sensitive, the Sherriff finds himself entangled in problems that
reach all the way back to his trip as an uncertain Deputy to Lucian Connolly on a train carrying 24
Sheriffs on an vintage excursion trained pulled by a steam engine — The Western Star.
Johnson, as superior mystery writers do, writes about human nature against the background of
physical nature. This is a great read.

I've seen the Longwire shows on TV, and enjoyed them. I will have to seek out the new book.

I love hearing author's success stories--he found an interesting and current plot. Is there some reason a cowboy hat doesn't sit on a flat surface?

E.B., you always set a cowboy hat upside-down on any surface. In theory, it's to keep the good luck from falling out. But in fact, if you set it the other way, it flattens the brim which has been carefully shaped. (I used to shape and sell cowboy hats, which is why I know this stuff.)

I love Craig Johnson and could reasonably be accused of stalking him. Just kidding. Sort of.

For anyone new to the books, I recommend starting at the beginning with The Cold Dish. Each one is better than the one before.

I haven't read the books or seen the TV show. On my list.

Warren, I remember being with you, Linda Rodriguez, and our dear friend Sam Morton at the conference. Wasn't Craig Johnson gracious? He and his wife were heading to Paris. He's loved worldwide!

Annette, You know your cowboy hats!

Paula, He was and his wife were very friendly.

Warren, yes I do. Have you noticed my WWK photo to the left? ;-)

I'm having a fan moment thru you. I loved Longmire.

I am "thrilled" to learn about the latest work featuring Longmire :) I loved the series, so off I go to Amazon! Great review :)