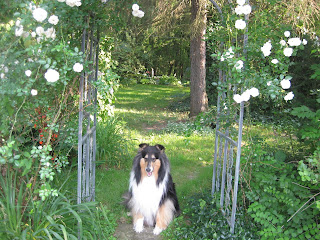 This past week summer finally arrived although I’ve always considered the first day of June summer. I have to admit that although I’ve always enjoyed gardening, this year I’ve totally neglected my gardens largely because March and April were either cold or rainy much of the time, and in May my sister, Catherine, who lives in Washington State, and her husband came to town for two weeks. My sister Elaine had planned activities for all of her siblings to do on the days they were here in Ohio like visiting Zoar Village, hiking in Cuyahoga National Park not far from my home, and Moraine State Park in PA., the Akron Zoo and other places so there was no time for weeding or planting the plants I had bought at the beginning of May.


After being hospitalized with pneumonia in June last year, I didn’t get much gardening done, either, and I decided then not to worry about it. Instead I decided to let nature take over in the several acres of the twelve acres my small farm has with half of it in woods and a nice sized pond out near the woods. My son mows the large open area behind my barn, but I do mow my lawn around the house and on the other side of my driveway where I have gardens, too. And I don’t have a riding mower so I consider that my exercise.

Last year I hadn’t planted very many vegetables in the large vegetable garden my son had fenced in for me at least eight years ago. The little I did plant, the rabbits had managed to get under the fence and eat what came up. So this year the vegetable garden has no vegetables planted and the whole area including the raised beds with brick walkways around them is one huge mess of tall weeds. On my list of things to do sometime this summer is to pull up all those horrible weeds, and then put something down like layers of newspapers and cardboard or the black material I bought before to hold down with rocks to cover where I pulled them so next year I can again put in a garden of vegetables and flowers.

My little farm has a large red barn and tall beautiful spruce trees in the area behind the house and a few in the front yard, too, with old maple trees, a few oak trees and a large weeping willow beside the house that when it died had to come down. It also has some apple trees, too. In the years that I’ve lived here, I’ve planted several Japanese maples, a dogwood tree, a redbud tree, a few crabapple trees, three magnolia trees, two pear trees, a sweet gum tree, a sycamore, a linden tree, another weeping willow, a blueberry patch and at least a dozen rhododendrons plus azaleas. I have many, many hostas of all kinds and hundreds of daylilies, too.

Years ago I had my grandsons dig out a place to put in a small goldfish pond, and two parents of one of my students (the father was a supervisor of Ohio’s Sea World) who learned that I was going to put one in, came over with their kids, rocks (which I already had a lot of) and put in a lining and brought some water lilies as well as goldfish to finish the little pond close to my house and the patio with a gazebo over it.

I had some retired teachers to lunch two weeks ago, and they looked at my backyard and side yard and thought it was so beautiful. You see many people don’t know the difference between weeds and perennials.

Since I bought my small farm in 1989 after my divorce, and two years after the elderly man who lived in it since 1938 had died. I finally moved into it in the fall of 1990 after my son had gutted it, replaced the wiring and put up new walls and made the house a nice place to live. He put in a new kitchen. He and one of my cousins and her husband came over and sanded and varnished the hardwood floors throughout my downstairs and upstairs. I hired someone to turn one of the front rooms into a library with built in bookcases on two walls.

Over the years my son added two rooms and a bathroom upstairs, and turned a sad back porch into a sun room. with

I love my small farm with two ponies, four hens, two barn cats, and of course, my beautiful collie, Maggie, my house cat Brat Cat, or Pixie, as my daughter wants to call her, my two old African Ring Neck Doves and Pavarotti, my canary who loves broccoli.  I love it even more since I’ve decided to let nature pretty much take over. Yes, I’m still doing some weeding around the edges of my gardens and pulling out weeds that are taking over here and there and mowing my yards although sometimes my son comes down the road on his riding mower to mow my front yard and the old orchard beside my house. Most of the time I mow the front yard before he comes.

Do you have gardens that you keep weeded?

Have you ever thought of letting nature have its way?

Nature wins in our back yard!! Your farm looks lovely, Jim.

Carla, I posted this for Thursday. Someone else was supposed to be up today. I hope I didn't get
rid of them.

We put in a small veggie garden that Hubby keeps weeded. My flower beds have been overrun. My intention is to someday have it all planted in herbs and perennials. Low maintenance is my keyword.

Gorgeous, Gloria! I so admire your gardens. I always wanted an English cottage garden, but never quite got the hang of it. We had a large veggie garden in Maine and I keep promising myself an herb garden, but I think that will wait until Maine as well.

Carla, this is my small farm and gardens. Jim posted it on our Facebook page.

Thank you, Annette. I wish I had someone to help with the weeding. I bought a bunch of herbs
from a local business that was having a sale. Unfortunately, the individual herbs were not
labeled so when I get around to planting them, I'll only be able to recognize a few like the
parsley. I'm going to put them in large pots that I can bring into my house before winter.
By the way, Annette, I'm reading Bridges Burned right now and totally enjoying it.

Kait, I traveled to England twice and really liked their homes and gardens, too. I've read English mysteries and for years I wished I had an English garden, too. I'm afraid my gardens aren't so English. However when I look out my windows from upstairs and downstairs, too, I really love them weeds and all.

Great photos of your place! Alas, the weeds have taken over my gardens with a vengeance.

I have a wildflower meadow that we seeded when we finished building our house in 2005. I have to weed it every year to get rid of the trees that think they should be there (we are in a forest, so they have a legitimate claim).

This year I mowed it for the first time. Over the 12 years it had been in place, the taller plants were taking over. After the mowing the devil's paintbrush are back in large numbers.

Margaret, I think it doesn't help that we had an awful lot of rain this spring.

Jim, a large ash tree beside my side woods died a few years ago, but before it died probably to the ash borer insect, it spread seeds everywhere. Every one of my gardens and sections of lawn have small ash trees coming up. I go around either pulling them if they're small enough or cutting them down. I would love to see your wildflower meadow. Sometimes between mowing my front or side yard, I used to get devil's paintbrushes, too. I stopped getting them last year when my son came over with his riding mower to mow my front yard. They may come back in the side yard that he can't mow. I have lots of wild daisies, too, that I pretty much leave where they are in some of my gardens.

And with the herbs, you can often recognize them by smell. Rub a leaf between your fingers and then sniff.

I was so pleased that the deer seemed to be leaving my daylilies and hosta alone this year. Then this morning, I went out to get the newspaper and discovered lots of healthy stalks with the buds bitten off.

Annette, I have a fool-proof method for determining if a plant is a weed or not. Pull it up, and if it grows back, it's a weed.

KM, weeds are just flowers with a bad publicist.

Hi Gloria, I like the hanger for the flower pots by the barn door, pretty! I just love the lush look of your property. I always laugh when you point out the weeds. I'll bet your goldfish pond is full after all the rain we've had! I failed miserably trying to grow tomato plants on my balcony last summer. This year I'm just going to do my harvesting at the Farmers Market. LOL - Laurie

Annette, I'll have to try that once I get them planted.

Thanks, KM. I took a lot more pictures, too, but didn't have enough room to post them all.

Laura, my daughter Susan gave it to me for Mother's Day. Yes, my goldfish pond is full enough to cover the filter. Laura, I'm doing the same thing with getting tomatoes this summer. I haven't gone to the downtown farmer's market yet, though.