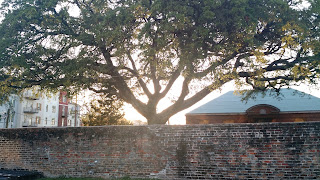 Few cities capture the writerly imagination like New Orleans, and all it takes is one visit to understand why—as settings go, it’s an embarrassment of riches.

Sultry and gorgeous and ripe with various temptations, New Orleans is a sensory overload, especially as spring warms into summer. The rising heat will set your blood on a slow simmer and make every horizon shimmer like a mirage. The air smells of river water, beignets, jasmine, and last night’s beer. The sound of a second line jazz parade competes with the laughter of Bourbon Street tourists and the clip-clop of carriage horses. It’s sex and death, brawl and languor, high passion and low company. 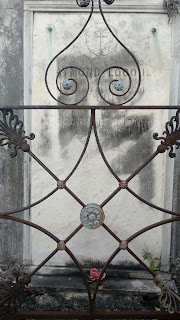 I thought of all this as I strolled through St. Louis Cemetery #1. Famous for being the final resting place of Marie Laveau—the celebrated voodoo queen—this cemetery is now off limits to anyone not a part of a tour group after someone vandalized her tomb with pink latex paint. The bill to repair the damage came to around ten thousand dollars, and to prevent further destruction, the Catholic Archdiocese of New Orleans, which oversees the cemetery, created new rules governing how and when tourists could visit.

Luckily for my family and me, one part of the prohibition was dropped while we were still in town—visitors could once again tour at dusk. We were the only group there that evening, and we got to see the cemetery in the warm, honey-colored glow of sunset. During the day, the white above-ground tombs reflect the light and heat with merciless ferocity. As the sun sinks, however, the graveyard takes on a different flavor. The dead feel even closer, friendly even, and the weathered beauty of the brick and wrought iron can be fully appreciated. 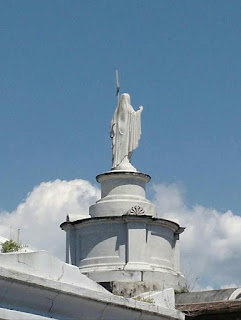 It feels timeless there, liminal, as if the veil between this world and the next has thinned. New Orleans is said to be the most haunted place in the US. One of its rumored supernatural residents is Pierre, who has a table set for him every night at Muriel’s restaurant. Pierre supposedly died by his own hand, distraught that his gambling debt meant that he would lose his beloved home. He committed suicide as a way to avoid eviction, and according to the legend, succeeded in staying put for over a century now.

I understand Pierre’s reasoning, I really do. For even though New Orleans is not my own, it is magnetic in its pull. I’m a Lowcountry girl, but I know I’ll be back to the Big Easy. It doesn’t feel as if I have a choice.


*     *     *
Tina Whittle writes the Tai Randolph mysteries for Poisoned Pen Press. The sixth book in this Atlanta-based series—Necessary Ends—is available now. Tina is a proud member of Sisters in Crime and serves as both a chapter officer and national board member. Visit her website to follow her on social media, sign up for her newsletter, or read additional scenes and short stories: www.tinawhittle.com.

I've only been to New Orleans once and that was for Bouchercon a couple of years ago. For this Pennsylvania farm gal, NOLA was like a different planet. You've captured it beautifully. I didn't manage to tour the cemeteries though and after reading this, I wish I had.

I've been to New Orleans a half-dozen times over the decades. It always has something new and interesting, but I find I have less tolerance for drunks and loud noise that isn't music. One of its draws was it "unique" architecture -- and then we moved to Savannah, which has many of the same features. Never say never, but I think we're done with the Big Easy.

In recent years, for family reasons, I've logged four month-long visits to NOLA. I miss its magic. I've learned to embrace the heat and take my morning walk early. My son had a New Orleans wedding. We flew down for Thanksgiving and experienced the magnificent Christmas lights display in City Park. We spent a lazy Sunday afternoon under the trees at Bacchanal Wine listening to a jazz violinist.

The pace is slow. People (and the ever-present pit bull mixes) are friendly. Music is everywhere. I sat on the grass in Jackson Square for a French Quarter Fest concert, until we all stood up and danced.

My daughter lives at the end of the Canal street car line, destination "cemeteries." On Thanksgiving Day, we strolled through the four adjacent cemeteries, re-living local history.

Tina, I've never had time to take the tour of St. Louis #1 and #2. On my list for my next visit. My favorite cemetery is Lafayette #1 on Washington Street in the Garden District.

New Orleans is also the home of a wonderful museum about World War II, which is one more reason to visit.

Annette, I hope you get to go back. I grew up in middle Georgia, and this city is far from the cotton fields. I have found that it unfolds a layer at a time. I'm sure NOLA will welcome you back.

Jim, I am also a crown and noise-adverse person--it's the one great detriment to any NOLA visit. I have been 4 times, once pre-Katrina, once a year post-Katrina, and two times in the past few years. Like you said, there's always something new, but I am finding my attention drawn to the smaller joys--the beignet shop in the park, the quiet courtyards, the out of the way restaurants. I got out of the French Quarter this time, to the Marigny, the Tremé neighborhood, City Park, some of the smaller cemeteries too, like Odd Fellows. I like the NOLA that's off the radar.

I went to three of those end-of-the-line cemeteries, Margaret -- how wonderful to have a relative there! The Canal Street streetcar is one of my favorite rides, just sitting and listening to the people and watching the houses pass by. Our tours there was powerful and poignant. Also, we were the only group, so they were solitary too.

Warren, we also visited the WWII museum, which was powerful and moving. I'm still processing my time there--it's still too raw to write about. I was in tears before we left. And now I'm home, watching one candidate for governor driving around in a hate bus that threatens to take "illegals" back to Mexico. Another candidate says he'll do the same in his pick-up truck. And the White House used the word "animals" to describe human beings. I saw similar things in the halls of that museum, not even a hundred years ago, words that led to the Holocaust overseas and interment camps on our own land. History is trying to repeat itself, in a most horrible way.

But yes, that's too much for me to write about right now. Nonetheless, I highly recommend a day at that museum. It's full of perspective. and I left both grateful and horrified, proud and ashamed.

I've yet to make it to New Orleans, but your post makes it sound so enticing. Thank you, Tina.

I hope you get there, Grace!

How beautiful! Truly a gracious city that's seen more than her fair share of trouble and risen above it. Definitely on my bucket list as an adult.

Tina, I'm going to NOLA at the end of June for a conference - can't wait to get there. I've been twice and both times couldn't pack enough into my days. The cemeteries are a dream for those of us who haunt them (I know you understand!) The food, the music, the architecture, the people... I could go on and on. The biggest negative (aside from the drunks) was the heat. I think I experienced heat stroke for the first time there, touring No. 1 in August. Note to self - go to NOLA in the winter.

Kait, you have pegged something extraordinary about this city -- the resilience of its people. Hardship pays regular visits to this place, and yet there is always joy here. Even the funerals are a cause for feasting and dancing.

And yes, I agree, Shari, the heat is punishing. I know a little about heat, being from Georgia, but NOLA heat is a creature all its own. We were there during record heat (for the spring) and I had to be very careful. Even 90 degrees was fierce.

It absolutely it, Gloria. You should give it a whirl.

New Orleans has been on my to-be-visited list for a while.


I have several friends who went to graduate school there, and they make it sound like a fascinating place.


However, the person who got me truly intrigued is a friend who sometimes spends summers there, working in a family-owned cigar rolling business. As well as talking about non-tourist, working class residents, he has tales of events that drift easily over into the paranormal, and says that while he doesn't believe in "that kind of nonsense" when he's north, whenever he gets back to New Orleans, he changes his mind, at least for the duration of the visit.

New Orleans will change one's mind about a lot of things, and the paranormal is one of them. Ghosts feel right at my elbow there, and I'm not a particularly sensitive person to such. But fertile ground is fertile ground. Definitely check it off your list real soon! (but after the summer. Always after the summer).

Did you see Nicholas Cage's plot?

Definitely felt the same things there. Very beautifully worded, Tina. Its a city for revelers, where life is meant to be lived and enjoyed, perhaps a little too mich for a stick in the mud like me, ut as a professional observer, I loved every minute of it and want to go back just to sit with the ghosts.

Dru Ann, I DID see Nicholas Cage's pyramid tomb! It was covered in lipstick kisses. You will appreciate that the first thing I thought when I heard that it was empty was, wow, what a great place to stash a body! But then I saw the cameras everywhere and realized I was wrong.

Karla, you and I would have the same kind of good time in NOLA methinks -- a good meal in a quiet courtyard where we could watch the revelry but not be IN the revelry. And New Orleans is perfect for that. We'll leave a seat open for a friendly ghost. or two.