I can't believe I'm Doing This 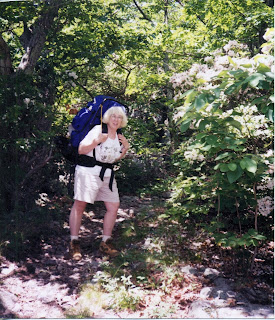 I couldn’t believe I had let my sister, Elaine, talk me into this. Here I was almost sixty years old and staggering out of a parking lot at Fisher’s Gap Overlook for a backpacking trip on the Appalachian Trail in Shenandoah National Park. I’m only five foot one inch tall and sort of pleasingly plump and though I like to walk and garden, my physical activities certainly hadn’t prepared me for carrying a pack that must weigh close to thirty pounds at least or maybe more. Elaine’s son, Caleb, had to put it on my back, not only that time, but for the next few days before I was able to swing it up on my back on my own. On that first trip three of Elaine’s teenagers went with us Caleb and two of his sisters.

For the next few days Elaine kept smiling and saying “Isn’t this fun?” She is seven years younger than I am, and both of us are teachers unused to carrying much more than book bags with papers to grade.

It all started with both of us reading A Walk in the Woods by Bill Bryson, and then other books on backpacking, and figured if Katz in Bryson’s book could do it, so could we. After all we had all camped from the times we were young. Our youngest sister, Cathi and her husband Bill entered into the spirit of the adventure and sent us volumes 1 and II Hiking the Appalachian Trail. This was our first introduction to Grandma Gatewood long before her book came out a few years ago. If she could hike the AT three times in her late sixties in Tennis shoes with a plastic curtain, a few clothes, a rain cape, a denim bag some nuts and raisins and little else why should we have any problem? 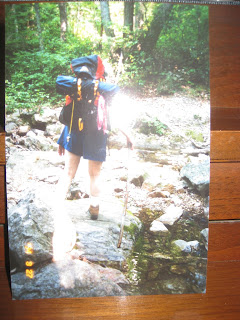 In preparation, we had bought a few things like backpacks, a backpacking stove and a water filter, and I bought a light weight sleeping bag. Our youngest brother, Phil, who had backpacked before with his Scout troop helped us with our selections so this became a real family endeavor. My children and another brother and sister thought we were crazy.  For the rest of our equipment we made do with what we already had or borrowed like sleeping mats, small tents, and a cooking kit. And, of course, we carried flashlights, ponchos, compasses, maps, whistles, books, playing cards, and I carried a small notebook and pens to write in. Certainly it was all more than Grandma Gatewood carried.

And there was the food, of course. Elaine loves cooking and wanted to make sure all five of us were well fed so she brought lots of canned food, meat, vegetables, peanut butter and jelly and packaged food like macaroni and cheese, and also bagels, crackers, carrots, apples, oranges, trail mix. As we ate the food our packs became much lighter and I was able to easily swing the pack onto my back. Elaine’s daughter, Emily, carried the tent Elaine and I shared so that helped us with weight.

I usually lagged behind all of them checking out flowers or stopping to look out over the Shenandoah Valley at overlooks. Elaine’s kids were always far ahead of us and would end up on a rock playing cards waiting for us.

That first night our sleep was disturbed by large animals moving around our tent throughout the night. Elaine thought they might be bears because when we registered for our backpacking permit, we had discovered that Shenandoah National Park has an extremely large population of black bears, approximately six hundred in all. We had put all our food and toiletries into a bear bag which hung high overhead and not close to the trunk of a tree for a bear to get.

As we went on the trip got easier and we so enjoyed looking at the incredibly beautiful views, the mountain laurel bloomed everywhere, and the birds, wildflowers, the rocks, the lichen, mosses, ferns and even the creaking pack on my back reminding me of the sounds of a saddle when I used to ride only now my role was reversed.  I love the experience of having everything I needed in the pack on my back, the freedom from the modern world and no concerns beyond reaching the evening’s campsite. It was nice to be totally unaware of what was going on in the world outside of our little world. On the first day, I doubted that I
would ever do this again. By the sixth day I couldn’t wait to go again.
My sister and I continued backpacking for ten more years and each year her son, Caleb went with us and the second year my sister Cathi, with a newly broken shoulder, flew in from Seattle with her son Michael to join us, and our brother Phil with his two sons joined us, too. Cathi wore a fanny pack but everything else she came with was divided by the four teenage boys. The following year her husband Bill came with her and joined us, too.

Elaine and I also backpacked on different trails in Pennsylvania. We continued until she had a heart attack one November. She’s okay now, but because cell phone service isn’t reliable in the mountains, we only took shorter trails in Pennsylvania and eventually stopped then and stuck to camping in campgrounds on our yearly trips to various areas around the eastern states.

Do I wish I could go back packing again? Yes, but I’ll be eighty in a few months and although I think I could still do it, I don’t have anyone to go with me, and being with younger people would never work out. I couldn’t keep up with them. I still have all my stuff though.


Have you ever gone backpacking?
Would you like to try it?

Email ThisBlogThis!Share to TwitterShare to FacebookShare to Pinterest
Labels: back packing the AT.and other trails.

In college, we used to go to the Shenandoah mountains to backpack and camp. But we lived in the city then and it gave us a different environment. Now, I have no need or want to backpack or camp. We go to the beach and live the outdoor life, but go home to our creature comforts. My husband lives at jobsites all day, sometimes without running water or electric. The last thing he wants to do is camp out on vacation.

I'm glad you enjoy it, Gloria. I know others do. You have to make reservations now to go on vacation in our National Parks. Have a great time and take lots of pictures for us!

Great stories, Gloria! Have you set a mystery story on the Appalachian Trail?

I've hiked pat of the John Muir trail in California. That was years ago.

What adventures, Gloria! I never want to get that close to a bear....
I did a lot of hiking and some backpacking when I was younger, and I did enjoy it, but mainly the hiking part. There's a tiny bit of the AT that passes through the northwest corner of CT (I think it's Mount Graylock) and we did that, but mostly it was in the Presidential range in NH, and one trip in NY. Now you're making me consider it again!
I like Margaret's idea - have you considered a mystery on the Appalachian Trail?

I'm not really steady enough on my feet to hike on uneven trails, and even when I was young, I had balance & endurance problems (it was almost a relief to discover, in my 60's, that I have serious congenital heart defects, and that explains a lot of the problems I've always had keeping up with everyone else--I used to just think I didn't try hard enough) but I enjoy the outdoors.

The AT runs close to us. I've parked and walked a bit of it, but not far.

Sounds like you and your family really enjoy this!

Elaine I love hiking in the hills and woods and thank goodness my siblings and one of my daughers like's that, too. But everyone has their own likes and dislikes.

Margaret actually in my 2nd book I had the mother of my police chief go on a backpacking trip with a environmental activist who came to town and stayed in her B&B. Then in the next book she tells about a murder on the AT that she and the guy she went with solved.

Warren, I've hiked sections of the John Muir trail, too, when I visited my California daughter.

Shari, actually sometimes teenage male bears come from Pennsylvania because the older male bears
will attack them. I've had them in my woods although I couldn't see it, I heard it and Maggie barked at it. The next day it was near my son's barn. My daughter-in-law saw it. The following year every blueberry on my patch of blueberries was eaten overnight. But I'm not afraid of them unless it would be a female bear and I got between her and her youngsters.

KM, none of us are backpacking now, and my brother, Jerry, who died about 8 years ago had no interest in it, and neither does my sister Suzanne, who loves camping and hiking, but not back packing. I use walking sticks when I hike, at least one if not two. It helps keep me from tripping or stumbling.