Give Them What You Advertise

I read reviews of my books on Goodreads and Amazon. I know “pro” authors don’t, and if one of my books had 16,484 reviews as does Stephen King’s The Shining on Goodreads, I wouldn’t read reviews either. But during its first month, Empty Promises earned 13 reviews each on Amazon and Goodreads. Most are duplicates between the two sites; some are not. Let’s say 16 reviews in total. 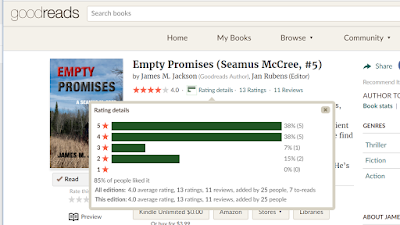 Assuming the actual writing is good (and for Empty Promises many have praised mine, and no one has complained), bad reviews generally are based on the reader not getting the book they expected. Reader expectations can be set from many sources. Here are four that authors that need to consider.

Where the book is “shelved.” If I find a book labeled as mystery, I expect something particular. If it turns out to be mostly horror with a touch of mystery, I will not be a happy reader (because I don’t like horror); and even if the book is well-written, that issue will likely cause my rating to slip a star or two. This is why it is so important for authors and publishers to choose the correct categories for their books. Amazon’s algorithms sometimes misclassify books. At one point their algorithms decided Ant Farm (Seamus McCree #1) was a medical thriller. Yes, there were scenes set in a hospital, but in no way would someone who expected a story involving doctors and medicine used for bad purposes be satisfied with my story. Fortunately, that hasn’t hurt Ant Farm’s overall ratings, although maybe that's why it gathered three 2-star ratings (although none of those people left reviews -- a big difference compared to Empty Promises). 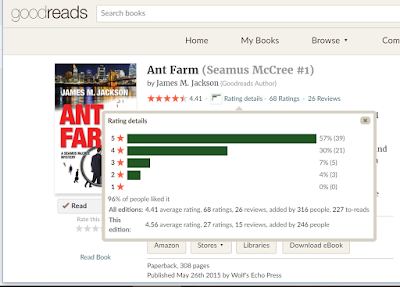 A second source of information is the back-cover or jacket-flap blurb or online description. It is designed to entice the reader to pick up the book and start reading. Sometimes these include comparisons. If you love Stephen King, you’ll love . . . Reading the two 2-star reviews on Goodreads for Empty Promises, leads me to the conclusion I may have screwed up my blurb. Both were exasperated by Seamus McCree’s incompetence (as they saw it) as a bodyguard.

“I expect some level of credibility to the storytelling. Sadly, I did not find it here. Bodyguards generally carry a gun ... which Seamus doesn't appear to have. Bodyguards do not leave their charges alone for any reason, especially if it's a teenager.” (Note: the person Seamus is guarding is middle-aged).

“Seamus McCree strikes me as a man who is totally incompetent in his role as a protector of federal witnesses. He screws up constantly, and his incompetence could cost him his business partner and soul-mate, Abigail. He is facing a hired killer, and he doesn’t even arm himself for the protection of his loved ones and his own life. How stupid is that?”

The problem is that these readers had expectations about what a bodyguard is and does. Seamus was supposed to hide the guy until time for the trial, with no expectation on anyone’s part that anyone could find them deep in the Upper Peninsula woods. Series readers know Seamus never has and never will own a gun. But I set an expectation in the blurb which says in part: “Seamus McCree’s first solo bodyguard assignment goes from bad to worse.”

I’ve shot myself in the head, that two-star review is by someone with a ton of Goodreads friends who have “liked” the review, putting it as the first one someone checking out Empty Promises will read. I can only hope that the 4.0 average rating will be high enough to encourage prospective readers to also look at some of the positive reviews.

Live and learn and by the time you read this or soon after, I’ll be changing that blurb, at least as it appears online.

The opening of the novel should make a promise of what kind of novel it is. One key to writing a satisfying novel is to have the book deliver what the opening promises. I hoped readers would realize Empty Promises is not a happy-ending story.

Everyone agrees that my decision to go into town that day cost one person his life. Attribution for the other deaths wasn’t clear-cut, although I thought I also bore that guilt. And it so easily could have been otherwise.

I can tell you that not everyone got the message. Some apparently want only happy endings and down goes the rating when their needs are not satisfied. 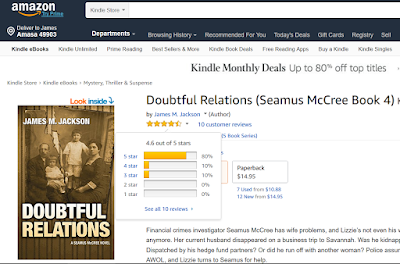 Consistency in a Series. People who have read earlier books in a series and come back for more do so because they enjoyed the earlier books. When an author makes changes to the series; i.e. the stories become lighter or darker, the protagonist starts acting differently, or the author kills off a reader’s favorite supporting character, it risks ruining what the series’ reader expected. A three-star review for Doubtful Relations (Seamus McCree #4) lamented:

I could have responded, when your family is falling apart around you, stress shows up in different ways. But even when reviewers are factually wrong (e.g. the person being guarded in Empty Promises was not a teenager), it does no good to point out the error of the review. You write the book you want to write, and once you release the book it is no longer yours; it belongs to the readers and they can share their views as they choose.

Unfortunately, the ill-informed and negative tend to share the most and loudest. (Oh, that was snarky of me, wasn’t it?) It does remind me how important it is to post positive reviews when you like a book because you never know who else is rating it.
Posted by Jim Jackson at 12:00 AM

Amazon won't let me post reviews (probably because I didn't purchase the books from Amazon) but I do post Goodreads reviews, almost always with five stars. But yesterday I'd had it with a book in a series that was the "same old" with no change in the series character arcs. Reading a book in a series is usually like spending an afternoon with an old friend, but in this case I kept counting the pages until it ended. And then I had to figure out why, so I don't make the same mistake in my books.

Margaret, As long as you have an Amazon account, you should be able to post reviews there. When you buy from Amazon the thing you review, they add an orange "Verified Purchase." So, I'm not sure what the issue is there.

It is very useful as writers to consider what specifically about a book we did not enjoy as part of our learning how to avoid those pitfalls.

I recently wrote in a guest blog about the importance of reviewing. Of course, I hope all of my reviews are positive, but honest negative reviews have also taught me much, too. Your post points out the value of both the positive and the negative.

Margaret, the same thing happened to me with Amazon. Every now and again, it will also pull my reviews and then not let me post no matter where I've purchased the books. Eventually, my reviews come back and my posting privileges are restored. I think it's because they realize that although I am an author, I am really not BFF with every other author on the face of the earth.

Jim, your comment, "Unfortunately, the ill-informed and negative tend to share the most and loudest"is, unfortunately true. Also, like the news--if it bleeds, it leads--those kind of reviews do end up being the loudest and most noticed. But it's a fool's errand to respond defensively, as you end up reducing yourself to their miserable level. Wonderfully gratifying, however, is when other readers add a negative comment about the reviewer's negative comment!

I do agree that reader expectation and gratification is extremely important. No one likes to be misled. Still, some of these reviewers are trolls who live to tear others down. I find more trolls on Goodreads than Amazon. I just had a dreadful Goodreads review for my new book, THE DARK SIDE OF TOWN: I think this woman hates me: "I raced (pun intended) though the final 1/3 of the book, just to be done with it, it was so painful. Two dimensional characters; lack of nuance; painfully trite dialogue; and just the WORST "romance" freaking ever. In places it was almost gag worthy." Yet somehow the overall rating on Goodreads is 4.26 and on Amazon 4.5. It also got terrific trade reviews. But, you can tell, I'm still agonizing over this one nasty, baseless review. What a waste of time to do this! Back to the next book. Carry on and march forward!

Kait -- Yes, we authors cajole readers to take a few moments to support us with reviews -- and on Goodreads all you have to do is leave a rating! Still, even after people promise it's often just not high enough on their to do list to get it done!

I can't keep myself from reading the reviews of my books, either. I try to learn from them. I figure all books will have some people who don't like them, and I don't worry about it. In my Jesse Damon series, I pretty much ascribe to the "leave it as the bedroom door closes" principle for sex, but I've still had reviewers who protest the sex aspect.

Amazon is so weird about authors leaving reviews for books, even if they don't know the other author and even if the book was purchase through Amazon, that some authors just refuse to leave reviews for any books.

This was so instructive! Those blurbs, as you pointed out, are very important. One little misplaced, misguiding, mis-stated word can throw off the reader--and the review. Thanks for pointing all of this out. Now I'll be SO nervous writing the blurbs!

The one review that will always stay with me (for CHOKE, Agatha-nominated): "Seemed pretty mundane. Don't know why it won any awards. Amateurish effort, but I'm a reader, not a writer, so try it yourself." It was three-star, at least.