The day after Murder and Mayhem in Chicago, I attended Jeffery Deaver’s Writing Commercial Fiction workshop, sponsored by the Midwest MWA chapter, and held at Concordia University in a nearby suburb. Deaver is giving his much-praised workshop to every MWA chapter nationwide. The experience was well-worth the trip to Chicago. 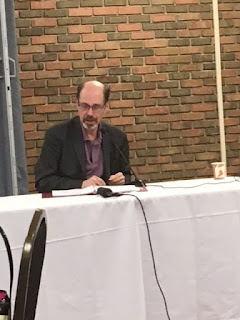 I’ll add my impressions of the three-hour workshop to Paula’s overview.


Deaver made a compelling and persuasive argument for extreme plotting. First, he fills a wall with sticky notes for every character and scene. He shifts the notes around, mulling over plot problems (in humid North Carolina summers, they often fall off the wall). Deaver spends eight months writing a seventy-five-page outline, with bullet points for each scene and point of view. During this time, he conducts all the necessary research for his book. He inserts into his outline the location in his research notebook of necessary facts and figures for quick reference (unlike less organized souls fumbling through a messy stack of print-outs).


Deaver's outlines are detailed enough to include dialogue and description. He gave us an example of how he rewrites a scene from his outline:


A character bandages another character. He rewrote the scene to include the specifics of “pressing gauze” against the wound secured with “criss-crossed adhesive tape” that reminded the patient of childhood tic-tac-toe games.


Deaver rejects the idea of writer’s block, terming it instead an “idea block.” If you don’t know what to write, it might not be the right time to try. Move on to something else.


Deaver writes his books to be emotionally enjoyed by his readers. There is a core story, embellished with “soap opera” family and relationship subplots as well as geopolitical situations or themes. Subplots must have a twist and a surprise ending. He maintains and heightens suspense in his novels.


Of the four components of a novel, plot and character are more important than setting and dialogue. Creating active characters is crucial. Deaver reminded us that villains should be likeable too—they are the heroes of their own story.


Deaver likened the pacing of his books to a symphony, with varied intensity of movements rising to a vast crescendo at the climax. He matches his writing style to individual scenes, more languid, with longer sentences, for description, and staccato for fast-paced action scenes. In recent years, he’s shortened sentences and paragraphs to match the faster, succinct pace of social media. He prefers a close third person point of view, showing the story unfold through the character’s perceptions and actions.


It will take me weeks to sort through all that I learned during the two-day workshop. Perhaps I’ll try sticky notes stuck to a table top as a plotting method. My dogs would rip them off a wall. 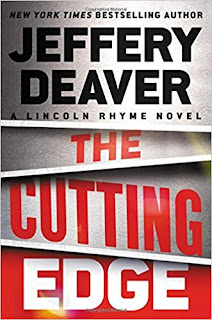 I enjoy Deaver’s books, but would give up writing if I had to follow his process. I am a pantser. I’ve come to the conclusion it’s part of my voice – just as Deaver’s intricate process is part of his voice. There is not a single method to writing, and that's an important lesson for us to learn.

Jim ia right. It's instructive to learn how other people write, but that does not mean a writer should adopt another writer's method. I think about how others work and I find bits and pieces to try out but I'm not willing to give up what has worked for me.

I attended this workshop in MA a month ago and agree that his methods works for him but would make me crazy. I find for me that a writer's tool that blends the best of the sticky notes world with actually writing the fine details works best. I use scrivener and write fairly short scenes. This lets me have a virtual sticky note wall.

Deaver's presentation is instructive no matter your writing style, as he has much to offer that anyone can learn from and adapt to their needs. Glad you like his presentaiton and posted this.

Thank you for sharing this, Margaret (and Paula). I love seeing how writers approach their work. I still am figuring out what works for me, but I'm getting lots of ideas and inspiration. Deaver's "idea block" is a good thought to mull today.

I took his workshop here in L.A. in September. Loved it. I could never do Post-its, I hate writing by hand, but I outline, too, although mine aren't as long as he are. My last one was 40 pages. Outlines are organic, too, which will eventually be the title of a blog post I write. And in my experience, they aren't the word of God. I can go over that thing a dozen times and still have to write my way out of it at some point. But the benefit of getting stuff organized first? I spent a few weeks doing nothing but creating my last outline, and finished a first draft in 10 and a half weeks. A good one that will require plenty of work, of course, but the bones are sturdy.

I tried a very bare outline for a stand-alone. I had trouble coming up with a major plot point so I thought, you know what, I'll pants it for a change. Well, what I came up with didn't work and I haven't figured out a solution so the draft is in my computer collecting e-dust.

I wish I had outlined it.

And sorry about the typos!

Thanks for this summary, Margaret. I saw his presentation in Denver earlier this spring. I love the idea of being able to write any scene in any order if the outline is there. I'm going to give it a try for a new story, although it could backfire with me and turn into procrastination.

Glad to hear these tips from an organized writer. You certainly make a case for attending one of the workshops if we can!

Thanks for the information, Margaret! It's amazing how differently people approach writing. I have to start with a plan, but nowhere as detailed as he does it. I take a week to a week and a half to line up my ducks, then go in. Actually, that initial phase includes writing the first chapter to get myself acquainted with my characters, especially if it's a new series. But old series always have some new characters, so it helps for all of my novels.

Jim, I'm less of a pantser, but I use a very fluid outline that's subject to change.
Warren, I agree. As writers, we try everything before we assemble our own toolboxes.
Claire, I'm glad you had the opportunity to attend Deaver's workshop.
Ellen, I've tried it both ways and while I free write the initial outline, I carve it into some semblance of structure before I start writing.
Nora, I'm not sure I'm ready to write scenes out of order, though I do free write character sketches before I start a new story.
Kathleen, it was wonderful to learn how a real pro writes commercial fiction. Commercial, not upmarket, not women's, not literary.
Kaye, I'm doing more plotting these days. It's easier to take the plunge if I have a general idea of characters and situation.