A few years ago, Lida Sideris introduced her character, Corrie Locke, to readers in her book Murder and Other Unnatural Disasters, the first in her Southern California Mystery Series. In April, the second book in the series, Murder Gone Missing, came out, and not a day too soon for readers who have been anxious to read more about Corrie and her madcap adventures.

I met Lida online when I interviewed her about her debut mystery, and I liked her a lot. Imagine my pleasure in getting to meet her in person at the recent Malice Domestic conference and discovering that she is just as sweet in person as she is online. It was a pleasure interviewing her again, this time about Murder Gone Missing.

Welcome back, Lida, to Writers Who Kill.

Jacket Text for Murder Gone Missing
Book 2: Southern California Mystery Series
A girl, a guy, and a missing body. What could go wrong?
Newly minted lawyer Corrie Locke has taken a vow of abstinence. From PI work, that is. Until her best friend Michael finds his bully of a boss stabbed in the back after confronting him earlier that day. Michael panics, accidentally tampering with the crime scene…which could lead the cops to Michael instead of the real culprit. He turns to Corrie to track down the killer. She doesn’t need much coaxing. Her late great PI dad taught her the ropes…and left her his cache of illegal weaponry.

Congratulations on the publication of Murder Gone Missing.

Thank you very much, Grace.

After you published Murder and Other Unnatural Disasters, did you find it easier or harder to write the second book in your series?

I’d love to say it was easier, but it wasn’t. There was a lot of hand wringing and foot dragging. I got stuck on what backstory to include, how to work the regular characters in and so forth. So I studied the #2 series books of more seasoned authors, took notes, and carried on.

It was a pleasure catching up with Corrie Locke, Michael, James, and the other characters you created in Murder and Other Unnatural Disasters. Once you’ve given your characters personality and traits that your readers become familiar with, do you feel constrained to keep them the same or comfortable allowing them to evolve?

A little of both. I enjoy placing my characters in uncomfortable situations and watching how they grow, interact and react, but there’s also bit of comfort in knowing their capabilities and weaknesses. For instance, Corrie doesn’t do well around bodies of water…big or small, and she proves it again in Murder Gone Missing.

As an attorney in the entertainment industry and surrounded by some zany people, you had lots to draw on for your writing, especially adding lots of humor. Do you find the job you have and the people you work with influence the book you are writing?

Definitely. I listen and take notes all the time. Recently, my first short story (“The Nut Job”) was published in Snowbound: Best New England Crime Stories. I’d met the inspiration for one of the characters during my day job. An elderly gentleman with big, black, space invader style sunglasses, hobbled in with a cane and a crew cut needing legal help. While we chatted, I was thinking he could be ex-CIA, now retired, and butting in where he shouldn’t. Little did he know…

Corrie is a licensed attorney, yet she isn’t adverse to possessing some, ahem, illegal weaponry or gaining entry into places without a key. What accounts for this bit of rebellious streak on her part?

Blame it on the PI gene she inherited from her late, great private investigator dad. Half of Corrie longs for a tamer, fairly normal life, okay, maybe a quarter of her is doing the longing, but she is, at heart, a thrill seeker. She thrives on catching bad guys, and she’s good at it. So far it’s been fun; she’s not been caught law-breaking. She’ll probably keep on pushing the boundaries, until she’s busted, which is bound to happen sooner or later.

In her bag of weapons, Corrie carries a six-pointed shuriken. What is a shuriken? Is it legal to possess one, and could you use one if the situation warranted it?

It’s a Japanese, or ninja, throwing star, traditionally used to distract or misdirect an opponent. But before you run out and buy your own, Grace, I’d check with local law enforcement to determine if it’s legal in your state. It’s illegal in most states, including California, where I (and Corrie) live. So it’s not likely I could use one. That’s my story and I'm sticking to it.
Pacing is so important to a good book. You start Murder Gone Missing with a real bang and keep the pace moving throughout. No soggy middle in this book. What is the greatest challenge to keeping the pace moving?

Thank you so much for that. I work hard to eliminate sogginess. I like chapters crisp. I try to conjure up as many action scenes as I can, which can be a challenge.

Yes, exactly, it was a given, thanks to my being a So Cal native. Diversity is what I’ve always known. I’ve been fortunate to be exposed to many cultures and a very diverse group of individuals, so it’s really writing what I know.

Veera, Corrie’s African-American friend and assistant (or should we say “accomplice”) is a fun character. When writing about characters of various backgrounds and ethnic groups, how do you protect against using stereotypes to describe them?

Friend and accomplice is more like it! Veera is smart, logical, loyal, and a hard-worker. She can also be quite creative and confidant. I think in terms of individual character traits, so that should steer me away from stereotyping.

When reading your books and the situations you put Corrie in, I find myself shouting at her, “Don’t go there!” Corrie is one gutsy woman. Are you as brave or foolhardy, or is she your alter ego?

Me too, Grace. I am so not brave or foolhardy. I’m the cautious, law abider. I wanted to create a heroine that is my polar opposite (except we both have a soft spot for a nice wardrobe and desserts). I’m hoping some of Corrie’s courage, though not necessarily her foolhardiness, may rub off on me!

Corrie can’t remember a single hug or normal father-daughter time with her father, but his mysterious disappearance haunts her. Please explain their unusual relationship. 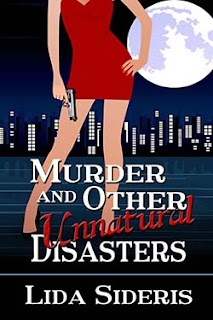 Corrie thinks of what wasn’t (normal father-daughter relationship) and what might have unfolded if her dad had still been around. Perhaps they might have become close one day. Maybe he would have put his seal of approval on her solo PI work, unlike her mother. Also, a big reason why it haunts her is because it’s an unsolved crime, a mystery that eludes her.
In the series, Corrie deals with her inability to forgive James for his treatment of her when they were younger, which complicates their relationship. Why is that, especially when she admits that she can barely remember why?

With promotion now being primarily on the writer, what promotional activities do you enjoy the most, or least?

I really enjoy meeting readers, and inspiring other writers (or wannabe writers). I love visiting bookstores and libraries (book people are the absolute best)! I’m happy to admit I’ve not come across a promo activity that I’ve not enjoyed. I’m so grateful to have a novel or two to promote that I can’t help but enjoy it all.

Now that you officially have a series with book two out, what things have you learned that you wish you had known when you started out?

Spend more time writing, and less time worrying about whether it’s any good.

When you have time to read, what authors do you enjoy the most?

Oh, Grace, there are so many authors I enjoy. Everyone from Donna Andrews to Tina Whittle. I also like reading the Stephanie Plum and the No. 1 Ladies’ Detective Agency series.

What’s next for Corrie Locke? I hope we’ll be seeing more of her.

In book three, Corrie’s working at the movie studio when life imitates art and a fictional murder mystery turns real.

Thank you, Lida. I look forward to book three.

To learn more about Lida and her books, visit her at www.lidasideris.com

Look for her books at your favorite independent bookstore or from the following:
Amazon, Barnes & Noble, Kobo, iBook, or through links on her web page.

Congratulations on your latest book! I look forward to reading it.

Congrats on your most recent. I wish I could truthfully say I enjoyed all forms of marketing -- good for you!

Thank you, Margaret! I hope you enjoy it! :)

Thank you, Jim! I even enjoyed speed dating with authors, which I understand most authors would rather not do. I like anything that allows me to connect with other readers and writers.

Lida -- I had a blast at the speeding dating with authors I've participated in several times. I'm lucky that I have a voice that can carry across a large table without a problem!

It's interesting that people ask if a second novel is easier to write than the first. The challenge is different but the process is just as demanding.

Hi, Warren - that is exactly right. It can be a demanding process all around, as I'm discovering with Book Three. :)

This should be a great series! Although I like classic mysteries, I also enjoy the action-packed ones with quirky, energetic characters. Sounds like your books fit the bill!

Thank you, KM! I'm glad you like the classics and the action-packed! Me too! :)

Lida, Ihis is a series I want to read. I'm putting you on my to be ordered list now.

Thank you very much, Gloria! I sincerely hope you enjoy it! :)

Congratulations on book 2, Lida! It sounds like a fun series!

Hi Donna! Thank you so much, and thanks for the visit - much appreciated! :)

A great big thank you to the wonderful Grace Topping for inviting me back!