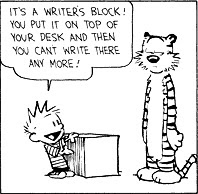 I know, I know, Stephen King says be a professional.
Plumbers don’t get plumbing block.
I was going to write about social media for writers but I got exhausted just thinking about it.
I considered my favorite writers’ rules for inspiration. Here’s a good one from the aforementioned writing guru: “If you don’t have time to read, you don’t have the time (or the tools) to write.” I’m dying to take Stephen’s advice and dive into Louise Penny’s latest.
But I put the Kindle down.
Usually when I want to avoid writing, I do housework.  Some people exercise (bless their hearts). Some cook, some paint. But for undeniably necessary excuses, you can’t beat housework. I mean, look at those dust bunnies! That laundry isn’t going to fold itself. I have to pack for Bouchercon! Better plant those bulbs. My poor husband will starve unless I go to the Stop and Shop right now!
Why does this happen? Why do I want to avoid writing? I love writing. Or, more honestly, I’m in the Dorothy Parker camp: I hate writing. I love having written. Plus I have a deadline. Actually, I have more than one deadline: One for Book Three in my Lobster Shack mystery series and one for a short story anthology I’d love to be in. Being in an anthology is a kick. Writing is such a solitary activity, while being in an anthology, seeing what other writers come up with for the theme, that’s actual writing fun.
But I have to rake the leaves…. and do research....

My Googling – okay I’ll be honest – writing avoidance led me to an article on writer's block in The New Yorker by Maria Konnikova. You can read it here.


Turns out that some researchers believe writer's block exists and for some people, stress can trigger it (see aforementioned social media for writers). The article was reassuring and reading it, I wasted a total of ten minutes I could have been writing. Research, right? (Writing Avoidance 101) The researchers also believe writer's block can be beat. I’m simplifying a complicated article, but there was an effective remedy: professionals gave the blocked writers “exercises in directed mental imagery” - essentially writing prompts.
This led to an epiphany. Sometimes that’s what I need – a prompt to write to.
I gave a cold shoulder to the clean but unfolded laundry and pulled out my laptop. My writing prompt? How to beat writer's block.
Sorry, honey, takeout again tonight. The laundry will have to fold itself. It’s time to write.

How do you beat writer's block?
Posted by Shari Randall at 12:00 AM

I switch up my writing time thinking that my muse is either sleeping in or staying up late.

It may be a hangover from the morning pages days. Did you do those? If I can get myself to the keyboard (and that is an if) I will simply type, nonsense, stream of consciousness, whatever, until something comes to mind and ideas begin to flow. It often, but not always, works. If I'm stuck but not blocked (plot point, painted my character into a corner, that sort of thing) I'll put pen to page. The act of writing by hand seems to open different neural networks and solutions can present themselves.

I don't beat it; I finesse it. I always have a number of not-yet-completed projects, and if I can't figure out where one of them should head, I put it down (reminding subconscious brain it has work to do) and pick up something else.

Now procrastination is another thing, especially if I have a camera near by. Then it's taking the picture multiple times to make sure I captured what I wanted, making any corrections in Photoshop, shrinking it to under 1 Mb so I can post it on Facebook, posting it on Facebook, and then responding to comments.

The only time I get writer's block is at the beginning of a book when I haven't nailed down the plot. I can "pants" write along the way, but in the beginning, I have to have a clear notion of where I'm going. That first chapter is so important to captivate and retain readers, I can't just write out of my head. If I can't write, it means I'm not ready to write, not that I'm unable. It's not a psychological problem--it's that I haven't thought out the problem thoroughly enough to take it full circle, which leads to the beginning.

I spent the weekend weeding, deep cleaning the house, and finishing a greeting card portfolio.

And had a major plot break-through!

Here recently, I've been setting daily deadlines for myself. I've started keeping a journal and at the beginning of every day, I write "TODAY'S BIG GOAL." I'm not always meeting the daily goal, but it does seem to be helping me focus on what's important to me at the moment.

For me, stress is the biggest factor in my inability to write. That and too many things competing for my attention. I recently participated in a write-in where local SINC and MWA members gathered in a room at a local community college and had a place to write without disturbance. Since I was beginning a new book, I used the time to brainstorm and handwrite notes. It showed me that I need to find a place other than my home to be able to at least get started. A library reading room sounds perfect.

Once I sit down and start, my chapters almost write themselves. It's all the other things on my list of things to do that stop me from writing. Also, I don't have the whole plot for the book I've just started, either. I do know my murderer, but that's about it. "I'm adding a new family, but only have a vague idea of how much they will figure into my book. The big thing stopping me is the piles and piles of papers on the table behind me - papers I've printed out, junk mail mixed with bills, etc.

By the way, the latest Louise Penny is excellent as always.

I once heard writing/writer's block described in "bathroom" terms. You are full and need to "deposit" your writing or... you are empty and need to put something in to digest... research, life experiences, etc. Sometimes, I just don't need to go to the bathroom. LOL Liked your blog.

Working on re-writing something I wrote earlier helps.

Kait, I've never done morning pages, but I am a firm believer in writing by hand to get the juices flowing. Something about it does help me get over the hump for sure.

Ah, finesse! That's it, Jim! Procrastination is a whole nother story. But I must say, your photography is procrastination we can all enjoy.

EB, it sounds like you truly understand your process. I'm getting there....slowly.

Julie, that's such a big part of the writing life - clearing the cobwebs and setting the goal. Hard with such busy lives, especially when you have kids at home.

Hi Grace, I've gotten so much done in library quiet study rooms. At home it's too easy to get distracted by all the chores that need doing.

Gloria, lucky you! I can't wait to get to my Louise Penny.

Anonymous - LOL! thanks for stopping by!

Warren, I do that too. It's a good jump start.

I always have lots of ideas, but life can certainly get in the way!

When I can't work on my novel, I turn to short stories. I like to answer anthology calls--the guidelines give me focus.