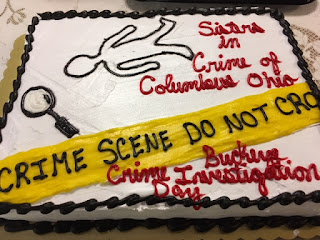 On September 23rd, I followed the rising sun north and east from Cincinnati to Columbus, Ohio, where the local Sisters in Crime organization hosted an all-day seminar at Blacklick Woods Metropark. 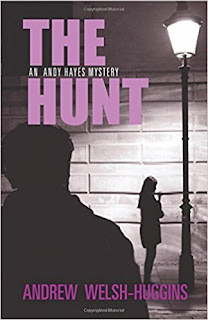 Andrew Welsh-Huggins served as program and panel moderator. He is the author of two non-fiction books and the Andy Hayes private investigator series set in Columbus, Ohio. First, he summarized his education and journalism career, before he discussed expanding research he did for news articles into his non-fiction books, the first on the death penalty and the second on domestic terrorism.
While he continued to work as a reporter, Welsh-Huggins wrote four mysteries. His PI protagonist Andy is an ex-OSU quarterback who committed a crime and was jailed a week before the crucial Michigan game. This is Ohio: there is no worse sin. Andy Hayes is based on Rex Stout’s fictional character Archie Goodwin and Robert Parker’s Spencer, with a “dollop of Travis McGee thrown in.”

In his most recent mystery, The Hunt, a young woman is missing. Andy agrees to find her, assisted by his sidekick Theresa Sullivan. Columbus is full of dark streets and deserted buildings as they make the rounds.

The Parthenon wasn’t quite as I remembered it: once dark, dilapidated and rank with the smell of spilled beer, it now sported actual ferns, brass railings around booths, and a real live menu instead of bowls of stale bar nuts. It had something else I didn’t recall: a bartender in black jeans, a tight Christmas sweater, and a smile bordering on saucy who asked me what I was drinking. (p. 83)

Andy Hayes is a likeable character, juggling his career, two ex-wives and two sons. And a girlfriend. And his parents. He confronts a very bad guy and uses his street smarts to survive. An ambitious politician and serial killer further complicate the plot. Andy succeeds, after a hair-raising scene in a deserted industrial tunnel.

You weren’t the best college quarterback in America by mistake. You accomplished that because you were chasing something. Glory, the thrill of it all, dreams, whatever. And all that got taken away from you…All of a sudden, you’re back in the game. You’re feeling it again. You’re the man, even if sometimes you get manhandled a bit on the way to the goal line. You’re fixing problems, not scoring touchdowns, but what’s the diff? (p.125)

Peter Tobin, U.S. Marshal for Southern District of Ohio, regaled us with stories from his long career in law enforcement. He described the hunt for a serial rapist solved by scanning license plates of cars parked in the area. The police found a car that wasn’t local, the registered owner with prior convictions. After obtaining a warrant, the police found the rapist’s souvenirs hidden in the car trunk and soon arrested him.

In another case, after reviewing local Walmart security tapes, the police matched the killer’s purchase of duct tape and tarps with a time and date stamped receipt found at the crime scene, and identified and arrested the killer.

Gary Wilgus, Special Agent Supervisor of the Ohio CBI Forensic Underwater Dive Team, gave a fascinating explanation of diving in lakes, rivers, and ponds to collect evidence. His divers work in black water with zero visibility, performing inch by inch touch searches in silt. Hand-held metal detectors vibrate instead of signaling with a sound. The evidence is collected in coolers to reduce oxidation.

Though his team collects evidence, not corpses, Wilgus patiently answered many questions about dumping weighted bodies in water. I suspect from feverish note-taking, many works-in-progress will feature a body surfacing in a pond or river, after the failure of whatever method was used to weight it down.

Detective Mitchell Seckman, Columbus Police, recounted his experiences in the “short north” neighborhood in Columbus. Over the past thirty years, he recounted gang violence and generational disputes, wonderful material for a crime novel.

Eliza McCune, Columbus PD Intelligence Analyst, discussed how she assists officers and detectives by supplying them with information and evidence gleaned from social media. Using a Facebook persona, she “friends” persons of interest and forwards their postings about weapons, crime, or cash made from drug deals. A major part of her job is searching for patterns of activity in different Columbus police zones. Eliza is a young woman dedicated to her profession, filled with passion and conviction. I hope she starts writing about her many and varied experiences.

With thanks to the Columbus Sisters in Crime for putting together an informative day on crime investigation.

Writers, do you write about police investigations in detail? Readers, do you enjoy reading police procedurals?

Sounds like a terrific meeting, and I’ll be you’re right that a lot of that material will appear in future manuscripts.

What a great meeting. Don't you feel energized and ready to write after something like that? I feel that way just reading about it.

Killer Nashville has a faux crime scene as part of their program.

I do like to read police procedurals, but I don't like to write them because I don't know enough details to give the scenes an authentic feeling. There are several cops in my family (brothers & brother -in-law) I can turn to with questions, a few lawyers who will help me, including a retired public defender from Los Angeles, and some other people (like convicts) who are fairly well versed in procedure, but I still feel my lack of feeling for it shows through if I try to write extended scenes.

What a terrific line-up of speakers. This type of program always motivates me to get writing or to stretch myself. The only problem is that I need to attend them frequently.

Thanks to all for commenting. I had met Andrew Welsh-Huggins at a spring book-signing with Lori Rader-Day, and enjoyed his book very much.

I was intrigued by the role of a Columbus PD intelligence analyst and wish I had her education and background to write a book with an analyst as the protagonist.