An Interview with Earl Javorsky by E. B. Davis 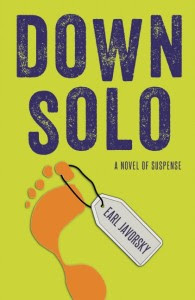 Things haven't been going well for Charlie Miner. His work as a private investigator involves him with an endless roster of shady characters. His ex-wife is borderline crazy. And he hasn't been getting to spend anywhere near enough time with his teenage daughter Mindy, the one person in his life who truly matters to him.

When he wakes up on a slab in the morgue with a hole in his head, though, things get even worse. 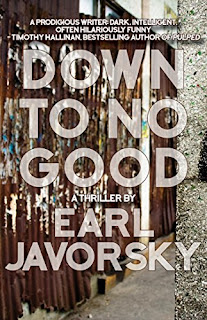 Down To No Good

An edgy and intense thriller with a touch of the paranormal.

Private investigator Charlie Miner, freshly revived from his own murder, gets a call from Homicide Detective Dave Putnam. Self-styled “psychic to the stars” Tamara Gale has given crucial information about three murders, and the brass thinks it makes the Department look bad. Dave wants Charlie to help figure out the angle, since he has first-hand experience with the inexplicable. Trouble is, Charlie, just weeks after his full-death experience, once again has severe cognitive problems and may get them both killed.

If you like feel-good reads, Earl Javorsky’s novels are not your cuppa. Violence, drugs, sex, freaky paranormal—yes, yes, yes and yes. Earl Javorsky writes well, very well—like reading an action-adventure movie with a loud soundtrack—more voices than speakers. Those voices coax the reader into the multidimensional world of main character and pragmatist Charlie Miner, a participant observer. Charlie’s like a twenty-first century Bob Newhart, logical, likeable, well intended, if only Bob were a divorced, dead, PI, drug addict living in LA.

After reading Down Solo, I intended to read something else. I almost succeeded, but then my morbid fascination poked the Kindle screen on Down To No Good, which will be released on Halloween (like duh). But please, start with the first book, Down Solo. Reading some scenes felt between terror and death. Charlie is down the White Rabbit hole. You want to wrap him up and yank him from the scene. He eventually helps himself (later rather than sooner) because of his daughter. We’re so glad she exists because she is his lifeline and also one source of much needed dry humor.

When Charlie wakes up in the morgue dead with a gunshot wound in his head, he steals another morgue roomie’s clothes. Too bad the guy was a skinhead. He covers the hole in his head with a baseball cap turned sideways. His daughter thinks he looks weird, remarking that, “You look like a retarded Eminem fan.”

Q:  How did Charlie become a drug addict?

A: The same way a lot of people develop a dependency these days: he had a bike accident and hurt his back. When the pain pills stopped working (and got too expensive), he found something that did work: heroin. The old path to addiction (alcohol, “recreational” drugs, opiates) has been replaced by a shortcut and broadened the demographic dramatically.

I need a plan. I’m jonesing pretty bad, so, bail out of the morgue,
score some dope to tide me over, and then on to the next order of
business: find out who killed me. The easiest way to do that, I figure, is
to visit everyone I know and see who looks surprised.
Earl Javorsky, Down Solo, Kindle Loc. 78

Q:  Logical and funny. But Charlie is the one who gets surprised first. Who is his Rasta cabbie, Daniel, and what gets Charlie’s attention? Why does Daniel keep popping up?

A: Daniel is Charlie’s mentor—his guide to his unusual circumstance. We come to find out (minor spoiler alert) that Daniel was Charlie’s facilitator at an unsuccessful ibogaine treatment ceremony in a Mexican clinic.

Q:  Charlie finds that he has the ability, with limitations, to scout outside of his body. How does this assist and detract from solving cases? 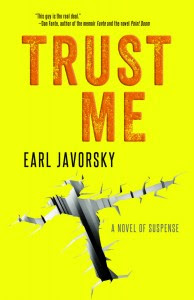 A:  Charlie calls it “roaming” and uses it to surreptitiously eavesdrop on characters who would not otherwise divulge information. The downside is that it leaves his body vulnerable while he’s gone.

Q:  Charlie “blanks out” at times. He isn’t aware he loses time. It’s like he’s in a trance to those around him. Drugs or death? What’s going on with him?

A: In Down to No Good, Charlie has been damaged by trauma at least twice: once by taking a bullet to the brain and once by—well, he doesn’t figure that out until the middle of the book.

Q: Fifteen-year-old daughter Mindy smokes weed. Should Charlie be concerned or in the scheme of his life, is this such a small infraction as to not matter?

A:  It’s a conundrum for parents in this age of wonders. As someone who’s parented teen stoners, I can tell you it’s tricky terrain. I could go on, and on . . .

Q:  I like Detective Dave Putnam, but I don’t know why. Do you?

A:  Because he’s a great guy. And  a real guy. The real Dave Putnam is a friend of mine, and in fact was a cop for over thirty years—Narcotics, SWAT, homicide, all the cool stuff. And, he’s a terrific writer—look him up on Amazon.

Q:  Charlie, induced by a radio-announcer-like instructor, learns how to repair the damage that killed him. Charlie seems to be able to exist without healing. Why is it the healing necessary?

A:  Well, the key there is in your phrase “able to exist.” Is that enough? He’s damaged, his memory is impaired, and he has to will his autonomic system to function.

Q:  In one scene, when bad people die, Charlie sees a shadow form take them away. Do you believe in heaven and hell?

A:  Not in the traditional sense, by any means. There’s enough of that in this existence. That said, “this existence” is quite likely not what it seems to be.

Q:  How did you get a publishing contract with The Story Plant and the endorsements by some well-known authors?

A:   Ha! I hounded Lou Aronica, The Story Plant’s publisher, after I heard an interview with him on NPR. He was talking about the  sad state of the publishing industry and how “good writers were falling through the cracks.” The first time I pitched him, he rejected me, so I emailed back  “Well, I guess I’m just another good writer falling through the cracks.” I mentioned that I could promise a clean manuscript because I worked as a copy editor and proofreader, and he started giving me other novelists’ work to clean up. Eventually, he asked for my first two books. He read them and wrote back that I had the potential for a good writing career.

About the good blurbs—it seems like the first good one opened the door for the next and I kept accumulating credibility.

Q: What’s next for Charlie Minor?

A: He might have to go to Alaska. I’ll ask him. 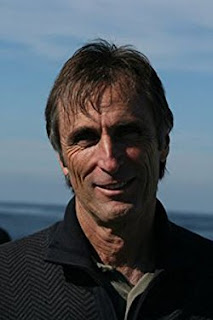 The interview is a full on page turner. These books belong on my TBR. What a great concept. I can visualize Charlie coming to in the fridge, right down to the toe tag.

Fascinating plot idea. It also sounds like a book that would have me checking all the locks on the windows and doors.

Another interesting interview, and who isn't intrigued by a guy with a hole in his head?

I didn't think I'd enjoy these books--but they are very well written--something all writers enjoy. The humor is deadly dry, welcome, and fun. Thanks for the interview, Earl, and of course, for writing this series. I'll look for more!

Thanks Elaine--For what it's worth, as a promotion for my Charlie Miner sequel (Down to No Good, coming out October 31) I'm giving away Kindle and ePub copies of Down Solo for the next two weeks. And, it's free on iTunes. Send me your email via Messenger. “Earl Javorsky’s bold and unusual Down Solo blends the mysterious and the supernatural boldly and successfully. The novel is strong and haunting, a wonderful debut.”
T. Jefferson Parker, New York Times bestselling author of Full Measure and The Famous and the Dead

Woops--how about reach me via the contact form at www.earljavorsky.com

Sounds like a series I will have to check out. I need to discover how a dead man is up & investigating! And find out why he continues to need his fix. Perhaps he's not really dead, but labeled and placed in the morgue anyhow? This bears investigating.