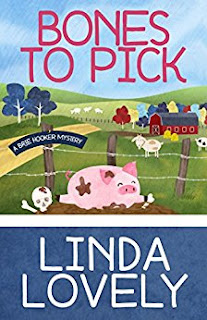 Living on a farm with four hundred goats and a cantankerous carnivore isn’t among vegan chef Brie Hooker’s list of lifetime ambitions. But she can’t walk away from her Aunt Eva, who needs help operating her dairy.

Persistence pays off—on October 24 Linda Lovely’s new Brie Hooker series will debut with Bones To Pick, published by Henery Press. Brie Hooker finds much irony in her life. After her fiancé betrays her, she finds two men are interested in her. Although she is a vegan and a vegan chef, her current work involves dairy—in the form of caretaking goats and chickens—neither of which in any form fits her culinary choices. Her dream come true happens only at the cost of a beloved aunt dying. So when another aunt lands on the police murder suspect list, Brie must solve the case to prevent another irony from occurring.

Brie grew up in Iowa, but her family migrated to South Carolina. How did this happen?

Brie’s Aunt Eva married a South Carolinian. After he died, Eva’s twin, Lilly, moved in with Eva to help her with the farm. Much later, when Clemson University offered Brie’s dad a job as head of its horticultural department, he accepted. Being near his twin sisters provided added incentive. Brie doesn’t arrive in South Carolina until Lilly dies and Aunt Eva needs her help.

The Udderly Kidding Dairy is located in South Carolina’s Ardon County. Is Ardon County real? Is it located near Clemson?

Ardon County is fictitious. But I’ve squeezed it into actual Upstate South Carolina geography. It’s located near both Clemson and Greenville.

Even though Brie is a vegan, she admits to having hunger for barbeque. Why is she a vegan? 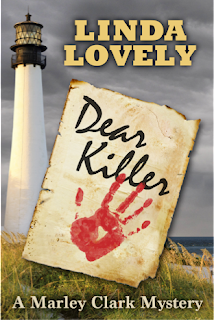 Brie believes it’s a healthier diet and better for the planet’s resources, but she’s not a crusader. She sees it as a personal lifestyle choice. (The same attitude as my family doctor.)

The Udderly Kidding Dairy produces goat cheese and chicken eggs for customers. Why is Brie working there when she is actually a vegan chef?

She arrives to temporarily help Aunt Eva run the farm. When her aunt becomes a murder suspect, she stays to prove her aunt’s innocence.

Aunt Eva seems a hardy soul. She even has a lover in her mule’s farrier, Billy Jackson. How could she have been a victim of spousal abuse by her long gone husband, Jed Watson?

Eva married at age nineteen. She was isolated from her family and humiliated that she’d made a terrible mistake. She made the decision to leave Jed just before he disappeared. Eva is now in her early sixties. She’s a different person than the abused teenager, and she’s vowed never to be anyone’s victim again.

Although Aunt Eva exaggerates a bit about Brie’s talents to two possible suitors, Aunt Eva also is a bit passive-aggressive in the form of Post-It notes to Brie. “…The choline in eggs may enhance brain development and memory—as a vegan you probably forgot.” Why does Aunt Eva do that and what started it?

Brie is accustomed to Eva’s jibes. Eva and her twin Lilly always sparred good-naturedly with each other, and it’s Eva’s way of showing Brie she accepts her as an equal and loves her as much as she did Lilly.

Brie’s father is a horticulture professor at Clemson University, but he is also an unpublished mystery writer and a member of Sisters in Crime. How has his mystery pursuit affected Brie especially during car rides?

Brie’s dad always shared his love of mysteries with his daughter, who is also an avid reader. When the two go on car rides, one of his games is to spot places where a villain might try to hide a body. He also tells her about his experiences each year when he attends the Writers’ Police Academy. 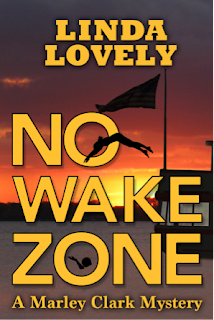 A friend from childhood who visits the farm, Mollye Camp, gets Brie into a lot of trouble. Why does Brie go along with Mollye’s attempts to investigate? Does Mollye know the meaning of the word “inconspicuous?”

Inconspicuous isn’t in Mollye’s vocabulary. Mollye’s a superb salesperson for her ideas, and Brie always thinks she’s figured out a way to provide a safety net.

They love each other and know exactly what objections another might raise if they were totally honest about their plans for a course of action. It’s not so much dishonesty as it is delaying disclosure to avoid arguments about things they feel they must do.

How many flavors of moonshine does Paint sell? Is peach Brie’s favorite?

As suitors of Brie, how do best friends—moonshining Paint and veterinarian Andy Green—retain their friendship while competing?

They’ve been best friends since childhood and have been friendly competitors many times in the past. Their friendship is too strong to ever wish the other one ill.

There is Cashew, Brie’s Teacup Morkie, Bai, Eve’s Border Collie, Brenda, a spoiled pet goat, Tammy, the Vietnamese Potbellied pig, five Pyrenees, guardian dogs, 400 goats, and a lot of chickens. Do they single-handedly keep Andy in business? Is it a wonder they need Paint’s moonshine?

Yep, there are a lot of animals, and I needed to do quite a bit of research into the behaviors of my animal cast. My memories of the weeks I lived on my cousins’ farm when I was about eight or nine didn’t cut it. Fortunately, one of my critique partners has two horses and a mule, and loves to share stories. I’ve also enjoyed spending quality time at Split Creek Farm, a nearby Grade A Dairy. I even joined in a “goat yoga” class there.

Do you have pets, Linda?

I had a dog, Brownie, and a parakeet when I was a kid. But I’ve developed allergies to pet dander and saliva—both cats and dogs—so no pets. While I’m not allergic to goats, I’m pretty sure our home owners’ association would fine us if we brought home a four-legged kid. Our lot is wooded, though, so at least I get to enjoy visits from a variety of birds. I’m less happy when a beaver visits and eats my roses.

How did the contract with Henery come about?

I’d spent time with several Henery authors at various conferences and liked what they had to say about their publisher. When I described the premise for my Brie Hooker Mystery series, they thought it was a fit and encouraged me to query. 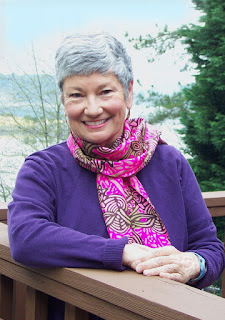 Hi Linda, welcome to WWK - congratulations on Bones to Pick. I am looking forward to a great read, and love that you worked in the Writers' Police Academy.

How lovely (one of my favorite words) to have you join us today at WWK. Having a character who is vegan is very interesting. I once prepared a meal for a vegan friend and her husband. I thought it would be difficult, but found that by giving it a little thought, it wasn't as hard as I thought. I think we can all benefit from a few vegan meals. Best of luck with your latest release.

Linda -- congratulations on kicking off a new series with Henery Press. All the best to you and the series.

Thanks, Jim and Warren. Henery Press is great. Have enjoyed working with the editors.

As an animal lover, I know I would enjoy your series. I've had a few goats before, or rather my kids did for 4H. I quit having any when I moved to my small farm because I'm also a gardener, and goats eat everything including rose bushes. Now I have two ponies that are sisters, five old hens, a beautiful tri-colored collie, a tabby house cat, two barn cats that were given to me when the owner could no longer keep them, a canary named Pavarotti, who loves broccoli, and two old African ring-necked doves that were given to me years ago for my third grade classroom, and the principal told me they had to go three days later.

Thanks so much for the interview, Linda. Your book was a fun read. I look forward to reading the next in your series. The snarky notes left by her aunt were inventive--a good passive aggressive touch!

What a menagerie! And yes, goats do eat just about everything. Some folks even rent them out to clear kudzu around here. But they're so adorable. At the goat dairy I visited, they stay in fenced fields so the owners can determine what they eat. Hope you enjoy the book.

Great interview! And I'm so looking forward to reading your book, Linda. Congratulations!