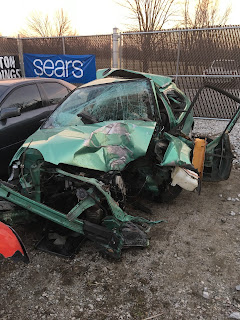 Just after midnight on February 4, a Saturday, my husband’s phone rang. At first, he ignored it because he didn’t recognize the number. But then the caller tried again and again. On the third time, he picked up, and we stepped into that nightmare that every parent fears: Your teenager has been in a car accident. He’s being transported to Kansas University Hospital in Kansas City.

The details of that night are fuzzy, but moments stand out with stark clarity. During the 40-minute drive to the hospital, my husband called dispatch back to get more details. Jake was alert, they said. He’d fallen asleep and wrecked his car. Alcohol and drugs were not a factor. I called the hospital. Would they bring him to the ER? Is that where we should go? The ambulance hadn’t arrived yet, but the hospital would call me back as soon as it did. Somewhere between home and Kansas City, John told me Jake had hit a tree. Until that point, I guess I thought he’d driven off the road into a field or something. Maybe rolled the car. But those words, “hit a tree,” gut punched me.

At the ER, they wouldn’t let us see him immediately. He was undergoing tests—MRIs and X-rays and who knows what. The woman at the reception desk called back to let medical staff know that “the trauma patient’s parents are here.” “Trauma patient”—another punch to the gut. She hastened to assure me that the words meant nothing, just a name for the unit tending to him. But I work with words. Words have meaning. “Trauma” is not a word you want to hear used to describe your loved one.

When they did let us see him, he was in a neck brace (as a precaution—further tests revealed no spinal damage), his arms and legs bleeding from numerous cuts and abrasions, only one deep enough to require stitches. The accident had shattered the ulna in his left arm. Within about a two-inch span near his elbow, it had broken into nearly a dozen pieces.

He was damned lucky.

Another moment that stands out from that night still brings tears to my eyes. One of the first things Jake said to us about the accident was, “Thank god it was only a tree.” That he’d hit a tree multiplied the horror for me, but for my child, who lay broken and in pain, it was something to be grateful for. He hadn’t hit another car. No one else had been hurt in the wreck.

When I think about that night now, I relive the fear and horror, now tempered with profound gratitude:

— For the seatbelt and airbags that saved my boy’s life

— For the Good Samaritans who watched over and comforted my child when I couldn’t (I didn’t get their names, but I am deeply indebted to the individuals who stopped to help Jake in the aftermath of the crash, one of whom sacrificed his own sweatshirt to wrap Jake’s feet, bare because he lost his shoes in the crash)

— For the doctors and nurses at KU Hospital who put him back together, especially Dr. Brubacher, an elbow specialist who just happened to be on call

— For the miracle of a human body that can regrow and repair crushed bone. For months after the accident, the possibility of a bone graft to fix the shattered ulna was ever present. Then at five months, the x-rays showed the bones starting to repair themselves. At seven months, the surgeon declared his arm healed. 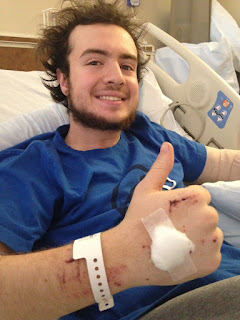 To say that he almost died would be overly dramatic, but he could have. Within a couple months of his accident, I read of two others in our area who died when they lost control of their cars and hit trees.

If there was one thing we consistently did right as parents it was to insist that the boyo always wear a seatbelt. When he was old enough to buckle himself in, we had a ritual. Before we started the car, one of us would ask, “Are you buckled and pulled tight?” Every time. As he grew older, he’d cut us off before we asked with a sarcastic “Yes, I am buckled, and I am pulled tight.” By the time he took the wheel himself, a buckled seatbelt was so routine he didn’t even think about it. He just did it.

This week, October 15–21, is National Teen Driver Safety Week. My message for this and every week is buckle up. Hug your kids. Tell ’em you love ’em. Insist that they wear seatbelts.

Every time.
Posted by Julie Tollefson at 12:00 AM

Every parent's nightmare. I'm so glad I never have had to go through that--getting "THAT" phone call. After both my kids got out of college, I heaved a sigh. Then my son went to grad school near Atlanta--an eleven hour trip home--and I worried again. He moved, but he's still eight hours away. I know accidents can happen anywhere, but it is still worrisome. People drive too fast! And speed really does kill. Buckle up and don't text!

My son flew down our steep Atlanta driveway on his bike and wiped out on the curb. We hung his crushed bike helmet on the garage wall to remind all the kids to always wear a helmet. He was fine.

The call came in a little after 6pm at the office. The central number rings and whoever gets to it first picks up. I was standing talking with members of my team near their cubicles and one of them picked up and handed me the phone.

I was in my new job in Cincinnati. My ex-wife, daughter, and son had been in a car accident in New Jersey. Son had been medevacked to Robert Woods Johnson. Daughter and ex-wife were in the Princeton hospital.

A numbness and a clarity overtook me. I wrote down the information about hospitals, numbers to call, etc. and double-checked that I had it all correct. My associates stood in silence until I hung up the phone.

I calmly told them what I knew. Only after I completed that task and returned to my office did I start to shake all over.

My son Joey had two car accidents. One was when he hit a deer, the other was on a curve where numerous people have accidents. Both times he wasn't hurt, and this was before air bags.

The one call that I got that really scared me is when I was called and said my son John was hit by a train on his small trail motorcycle. They said he was okay, but my heart beat all the way to the place where he had crossed the tracks to a shopping mall. The front of his cycle was smashed and he was sitting in the backseat of a police car. Except for a large bruise on the inside of his upper left leg, he was okay, but worried about what his father would say about him wrecking his cycle. My husband had bought both of our young teenage boys one. I didn't approve, but since they would only be riding trails in the woods or through fields I didn't make too much of a fuss. The spot where the handlebars or whatever hit him on his upper inside leg is where the cancerous tumor appeared five or six years later.

Children are a blessing and a joy, but they also have us worrying about them, too. Believe me, with four children born in less than five years I have had lots of scares over the years.

I'm so glad you son is okay. I received a similar call from my sister saying that my niece had hit a tree and was in the hospital. She told me to bring clothes for a funeral just in case. Fortunately, my niece survived, but she is now paralyzed from the waist down and is permanently in a wheelchair. We also feel thankful for everyone who saved her life.

Elaine - Jake is planning to move a couple hours away next fall. I have a whole new batch of worries now!

Margaret - So fortunate that he was wearing a helmet! And a great reminder.

Oh, Jim, how awful! I can't imagine how hard that was - to be hours away instead of minutes. I was at the office when my husband called to tell me his father had died. To this day, I don't remember the drive home.

Gloria - joy and worry do indeed go hand in hand with raising kids, don't they? Fortunately, joy outweighs the worry most of the time.

Grace - I'm so sorry for your niece's accident. I know Jake's could have been a lot worse and our troubles are minor compared to what others have gone through.