Raise your hand if your mother or a teacher ever said to you, “Don’t judge a book by its cover.” Do you believe it? I do. I’ve seen book covers that have only the title and the author’s name in common with the book inside. Book cover designers are not paid to have you judge a book based on their design; they’re paid to have you BUY THE BOOK based on its design, or barring that, at least pick the book up or click on the electronic “See inside” button.

One of my favorite authors is John Sandford. I have read the entire Prey series featuring Lucas Davenport. I thought it would be fun to look at what has happened over time to the cover of Rules of Prey, the first in the series.

Plain black background. Title large and red. Debut author’s name medium and white. A yellow note with black print of one of the rules, and a red fingerprint. Notice at the small size I have made the cover (thumbnail size these days) you can easily read the title and the author. The yellow note is unreadable.

The black background remains, as does the red title, which is now even larger. John Sandford’s name is still the same size, but also red (and so it doesn’t stand out). The rules note has been simplified (no longer uses one of the actual rules), the note color is not as vibrant, and the red fingerprint remains.

In addition, we have a shouted blurb at the top: “THE TERRIFYING NEW YORK TIMES BESTSELLER introducing Lucas Davenport in the smash debut thriller by the author of Silent Prey”

So, Lucas Davenport has become a marketing name and it ties into Silent Prey, book #4 in the series (1992).

The color scheme is completely different, with a construction-worker green background on top and white on the bottom. Author and title are now both large. The yellow note aspect is captured in the “E” of Rules.

The longwinded promo at the top is replaced by “#1 New York Times Bestselling Author” (notice no all caps shouting) AND a blurb by Stephen King.

The rich get richer, don’t they?

A year later a paperback edition had a different cover:

It’s a throwback, with the black background, larger title than author (although the author has a different color), and the original note has returned, but large enough you can read it.
The Stephen King blurb is in the slash at the bottom left. When you get a blurb from King, you keep it.

They’ve added “A Lucas Davenport Novel” in a color that stands out, and it and the title are skewed in such a way to imply 3D.

And look behind all the words: a picture or at least an illustration of a scene! That’s very different from any of the previous versions.

There have been a gazillion other covers along the way for different foreign markets, audio books, etc. I picked just a few to illustrate the changes.

Isn’t it interesting to see how one book’s covers have changed?

Here are my current five Seamus McCree titles (four novels and a novella):

Some consistencies: A big title. Author’s name in white print and relative small (who the hell knows me, right?) A subtitle “A Seamus McCree Novel (or Novella).

And here’s my stab at a cover for Empty Promises. I’d love to know what you think: good, bad, indifferent. 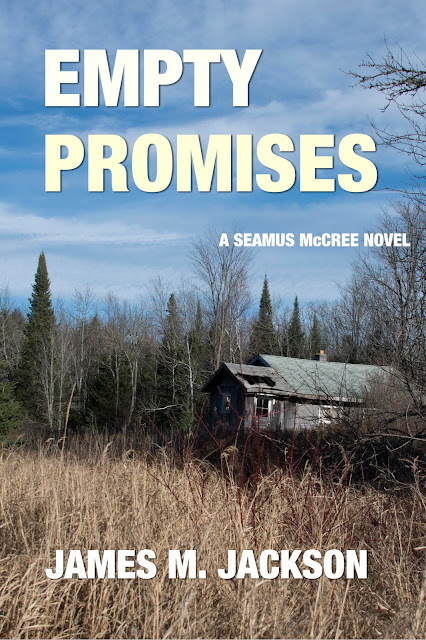 empty house, empty promises. Your photo? Go for it!

Margaret, the photo is mine. I'm hoping the picture is more shack-like than house-like. I wonder if erasing the chimney would help make that conversion.

Great photo. As a photographer, I would say roughen it up by using a treatment like gloom or grunge. Sometimes using posterize (lightly) and mix it with a few others until I get the right "rundown" look. I love to do this. I use ACDSee, a photo program which is much less expensive than Photoshop. There are some new free apps or programs that offer some nice treatments.
Right now, you are correct; it seems a bit too nice for the title. IMHO.
The layout is great and works with the photo. The lettering works too; against the blue sky and the bottom colors.
Again, great photo; perfect for the cover.
Look forward to reading the installment.
Holly

Holly -- thanks for your suggestions. My better half and I have been "discussing" this for a while. She likes the current version and I was suggesting using something like a gray undercolor and decreasing the photo's opacity (but not the lettering) to (say) 50%.

I do have Photoshop, and will play around with your suggestions on that portion of the photo, leaving the blue sky and weeds as is.

Nice photo, jim. It's close to what you want.

keep the chimney which "ages" the house. Otherwise, you'll have to add a stovepipe

Well done, Jim! I like the cohesive look of your series and the way you're carrying it into your new book (Ant Farm has red text - I wonder if that can be changed in the future to match your other books?)
I'm with Holly. That blue sky seems a bit cheerful for a book called Empty Promises.

Shari -- Perhaps Ant Farm'c cover will get a remake in the future, but no promises on that. :)

"Ant Farm" is my favorite of all your covers. Great photo for your new cover. I would suggest a different color than white for your name. Even a creamy white would work better.

It's wonderful, Jim. I see what you mean about aging it, but it looks great as is. If you do want to give a more abandoned look and you are good with photoshop or the like then since the cabin is obviously in snow country swayback the roofline a bit. You know the look, one more winter and she's gone. But really, it's not necessary, it already has that nobody loves me look.

Grace -- It's always interesting to me which cover people like the most and why. Ant Farm was a good example of the collaboration between author and designer.

Kait -- Swaybacking the roof is an interesting concept. Another thing I considered was sticking a tree through the roof-hole on the "extension." I could punch another hole or two in the main room's roof.

I love your covers! They evoke a feeling for the stories, and in a few, anchor it in space. I think making the sky a bit bleaker would enhance the abandoned feeling for the new one.

The cover progression you show is interesting. I wonder if they put a lot of thought into it and are responding to researched information, or if it's all kind of seat-of-the-pants.

KM -- I assume (and that could be a big assumption) that at least the latest covers reflect a big five publisher's take on how to promote one of their top selling authors. And reading blogs and articles from designers from the big firms, it sure sounds like they work hard to make it right -- but that doesn't mean they actually have facts behind their decisions.

Desolate cover, Jim, but it is intriguing. I like that the word Empty is in white--devoid. Gives me trepidation, which in my case may make me hesitate to buy it. But you aren't looking for cozy readers. So--I think you've done well. I just hope there isn't a body in that shack of a house.

EB -- What me put a body in an old shack? Next you're going to suggest someone in the McCree family is going to find it!

You are right that I don't write cozies; but I don't write noir, either. I think my novels are a combination of light and dark, sunshine and the depths of night.

Effortlessness - It's continually intriguing to me which spread individuals like the most and why. Subterranean insect Farm was a genuine case of the cooperation among creator and architect.
Logo Design

I will design book cover, interior layout, and create ebook.

For More info or Order - https://www.fiverr.com/share/ZdxVoQ

I will design original Book Cover.


For More info or Order - https://www.fiverr.com/share/2AwlYN